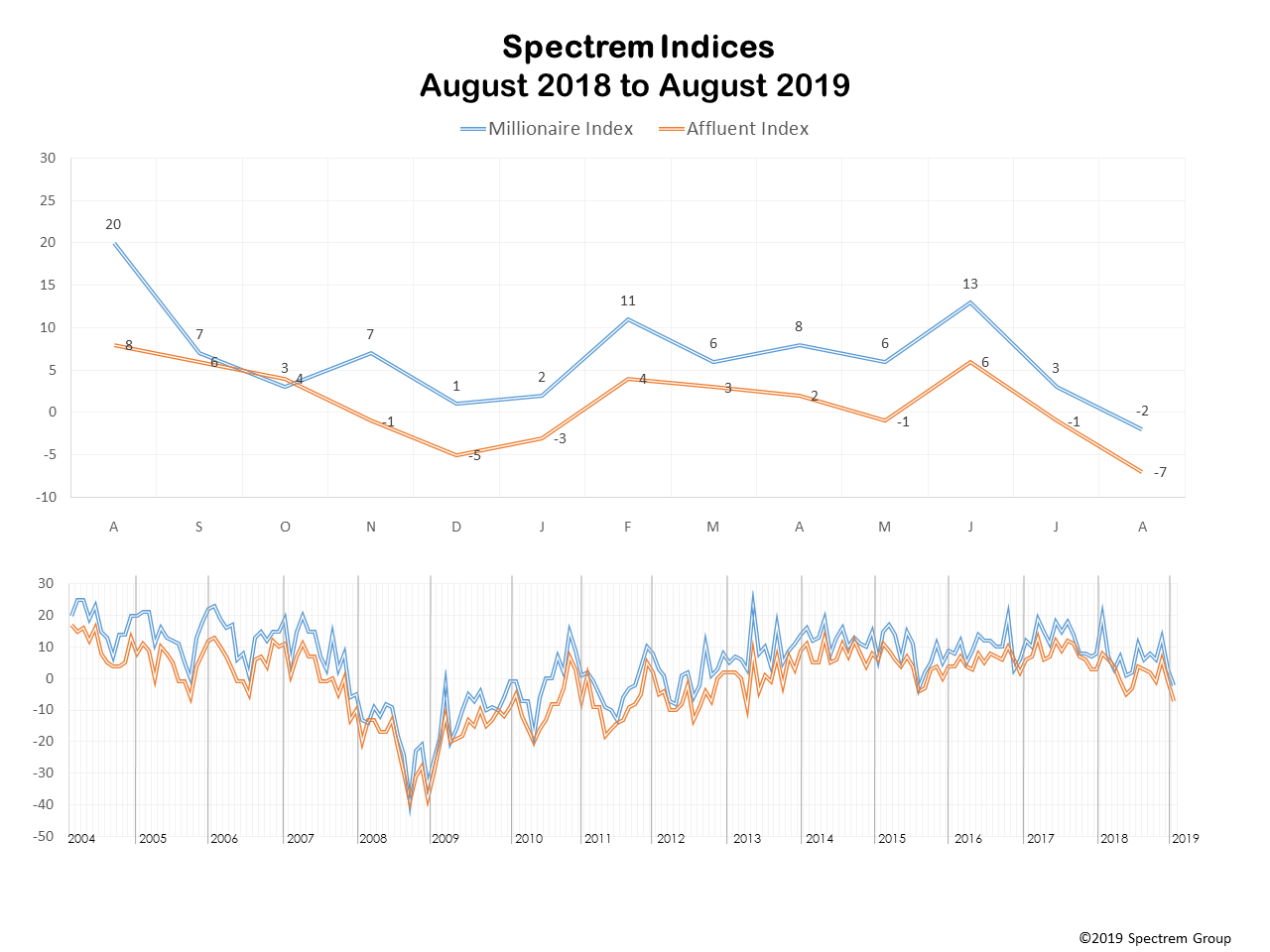 ·         An 800-point loss in the Dow Jones in mid-August was caused by recession fears and it then heightened those concerns. As a result, investors reported their most pessimistic view on investing and the economy in the August Spectrem Investor Confidence Indices.

·         The indices fell despite a rise in investing intentions among both the Affluent and the Millionaire investors, but the increase was in the safety products of cash and bonds. Among Millionaires, individual bond investing rose from 10.9 percent to 16.8 percent. Cash investing among Millionaires with $1 million in investable assets rose to 33.6 percent, the highest percentage of additional investing in that product since August of 2012.

On Aug. 13, 2019, the Dow Jones Industrial Average closed at 26,279.91, but the Treasury Department that day reported yields for the 2-year Treasury bonds exceeded the yield for 10-year bonds, marking the third time in one week that had occurred. That historic signal of approaching recession caused the DJIA to drop by almost exactly 800 points on Aug. 14, 2019, and two days later, the Spectrem Investor Confidence Indices were fielded.

The huge decrease in the SMICI and SAICI reflected concerns that the bull market of the first two-plus years of the Donald Trump presidential administration had run its course. Administration officials immediately spoke out against the concern, but the damage was done. Investors who were around for the 2008 Great Recession remembered the Treasury bond yield signal from 2007, and with the curve flipping so frequently over such a short amount of time,  those investors decided to take the signal seriously this time.

In August, the SMICI fell five points to -2, going negative for the first time in 3 ½ years, dating back to the start of the last year of the Obama presidency. The SAICI fell 6 points to -7, its lowest mark since August of 2013. Combined with decreases in July due to confusing trade reports with China and the concern over the state of Brexit, the two indices have reached historic lows.

The report on the individual components of the Spectrem Confidence indices show that investors are not pulling away from investing, but rather are choosing to invest in cash and bonds rather than the stock market. Millionaires increased intentions to investing in cash and bond products and reduced interest in individual stock investing. The increase in bond mutual fund investing rose from 10.9 percent to 16.8 percent.

Among non-Millionaires, cash investing rose from 19.7 percent to 23.0 percent.

Spectrem’s Household Outlook, a measure of the long-term optimism among investors in four financial factors which impact a household’s daily life, dropped among all investors from 24.70 to 8.00, the largest one-month decrease in five years. The Outlook for non-Millionaires fell from 23.98 to 3.10, reaching the lowest level since January of 2016.