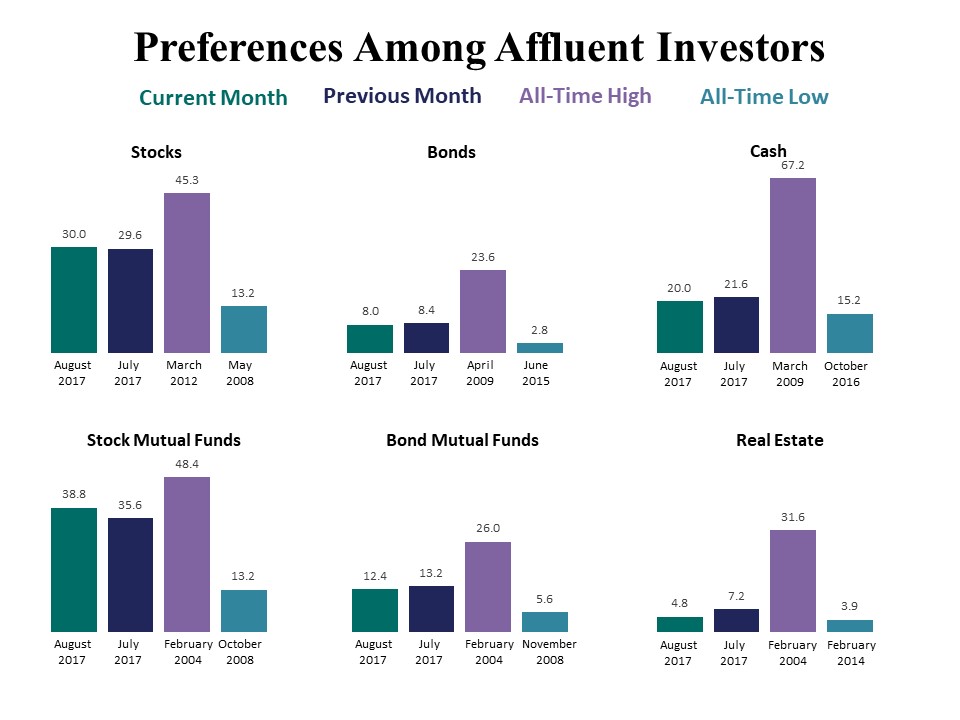 Among Millionaires, the only indication of greater interest from the previous month was in stock investing, increased to 37 percent from 34.3 percent one month ago. Interest in individual bond investing and real estate investing were both down approximately 3 percent each.

Among non-Millionaires, interest in stock mutual fund investing increased to 35 percent, the highest rate since February. There was also a bounceback interest in individual bond investing to 6.5 percent after a drop to 2.8 percent in July, an unusually low percentage.

When comparing Millionaires to non-Millionaires, it is not unusual for one segment to increase interest in investing why the other shows less interest. What is often the most telling is when the two segments agree, and in August, the areas they showed the same inclination was in cash and real estate investing, in which both segments showed less interest.

There is often a great disparity in stock investing between the two wealth segments, and the difference reached more than 14 percent in August, from 37 percent of Millionaires investing in stock to just 22.8 percent investing among non-Millionaires.

The percentage of women not investing rose to 45.2 percent, while men reported an increased interest in investing, with only 32.2 percent not involved in August. The greatest dichotomy was in stock investing, with 33.3 percent of men and 21.2 percent of women expressing intention to invest. That indicated a slight increase in interest among women.

The Spectrem Millionaire Confidence Index continued its rise among males to 16. Among women, the index remained below zero, at (6) for the Affluent index and (5) for the Millionaire women.

The index rating among Democrats rose in August to 3 from a mark of (2) in July. However, the index dropped for a second month among Republicans to 10 from 13. It is rare for the two parties to have indices that close in number.

Almost 50 percent (48.4 percent) of retired investors are not investing for the next month compared to just 26.6 percent of working investors.