Apparently, Improved Income Is Not Everything 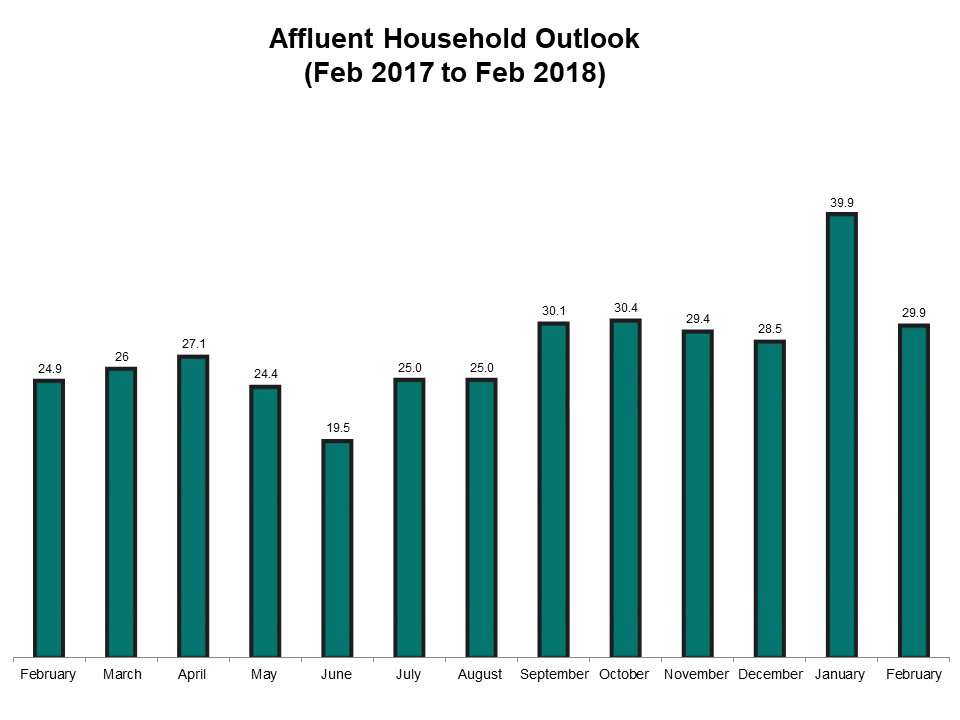 Affluent investors appreciate the increased income that appears to be coming their way these days. But an increase in take-home pay apparently does not translate to an improved outlook on the state of the American economy.

The Spectrem Household Outlook, the monthly study of investor opinions regarding the state of the American economy, fell in February after reaching a 13-year high in January.

The Spectrem Household Outlook asks investors to rank four financial components in their lives in terms of how they perceive them to be progressing. In February, the overall Outlook among all investors dropped to 29.90 after streaking to 39.90 in January, which was the highest rating since February of 2005.

The rebalancing of the Outlook appeared to come as investors decreased their outlook on Household Assets, Company Health and the Economy, all while increasing their Outlook related to Household Income.

While the overall Outlook for Household Income rose for the third month in a row to 29.90, the Outlook for the Economy fell to 21.20, a drop of more than 20 points.

The drop in economic Outlook was similar among all segments of investors: gender, political affiliation and retirement status.

Millionaires dropped their Outlook on Household Assets by almost 13 points in February, to 56.25. Among non-Millionaires, the decrease was by more than 6 points to 51.89, the lowest mark since October of 2017.

A quick glance at your pay stub shows most investors that their household income has increased thanks to the new tax laws. The increase in Outlook toward Household Income rose slightly overall from January, and among non-Millionaires it reached the highest level since

Millionaires recorded an Outlook toward Household Income at 32.64, the highest level since September. The non-Millionaire Outlook registered at 25.47.

This is an Outlook component that examines the effects of the current economy on the well-being of the company for which the investor works, and the Company Health Outlook fell to a level not seen since October.