How Investors Spend Their Money 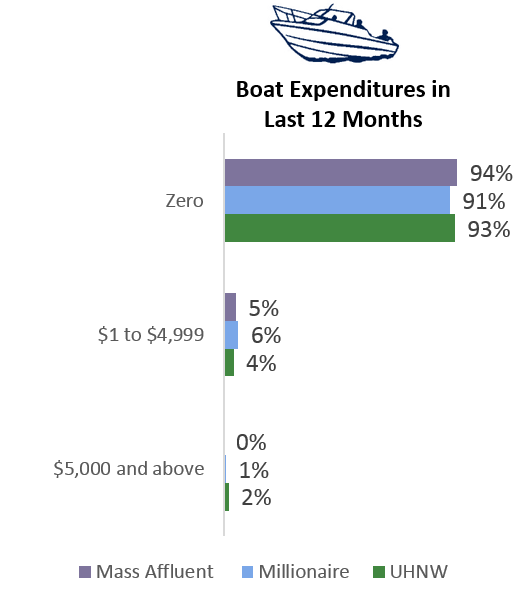 One way to achieve that goal is to be prudent with expenditures.

Our latest whitepaper, Spending Choices Among Wealthy Investors, reveals the spending habits of investors over the past 12 months in three wealth segments. The data shows that while investors may have an occasional spending spree, for the most part they are careful with their expenditures.

The whitepaper looks at some conventional expenditures such as vacation or leisure travel, club memberships and contributions, either charitable or political. But when it comes to the big-ticket luxury items, the data is revealing.

No item says “disposable assets: more than a boat. Owning a boat is one of the most expensive expenditures over the long-term, and the purchase and housing of a boat is expensive. Our whitepaper shows that more than 90 percent of investors did not spend a dollar on boats in 2015. Only a tiny percentage spent as much as $5,000 or more on a boat in 2015.

Automobile purchase are a timing issue, though wealthy investors are more likely to add to or upgrade their driving choices. Still, more than one-third of all investors did not spend any money in 2015 on automobiles, and another one-third overall spent less than $5,000 on automobiles. Millionaires showed a greater interest in vehicle spending: 10 percent of Millionaires spent at least $25,000.

Occasionally, a wealthy investor has the desire to own something no one else has. Whether it be unusual currency or coin, or art, or one-of-a-kind automobiles, collectibles often draw the interest of wealthy Americans with the funds to invest in such particular interests. However, most investors did not spend any money on collectibles in 2015, and only approximately 25 percent of investors spent as much as $5,000. Eight percent of UHNW investors spent more than $5,000 on collectibles.

“It makes sense that wealthy investors would occasionally spend on luxury or big-ticket items; it is one of the perks of being wealthy,’’ said Spectrem president George H. Walper Jr. “But our research shows that wealthy investors do not splurge on luxury or big-ticket items as much as some might believe they do. One of the tenets of having great wealth is being wise enough to hold on to that position and avoid unnecessary expenditures.”