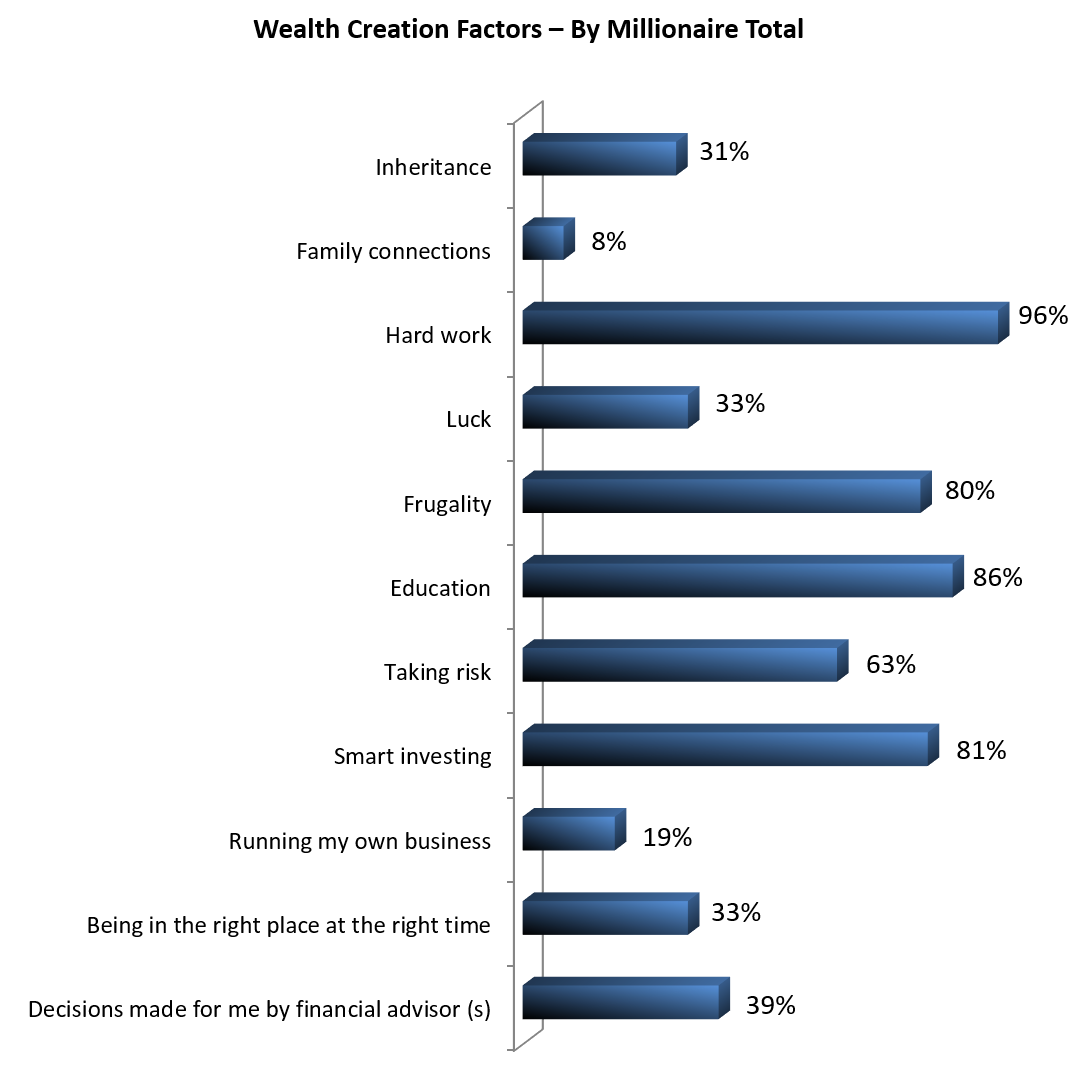 “So, how did you get as wealthy as you are?”

In our latest wealth segmentation series study, Financial Behaviors and the Investor’s Mindset, we asked Millionaires with a net worth between $1 million and $5 million (not including primary residence) what factors led to the creation of their wealth. They were given the choice of 11 factors, and were allowed to select as many as they felt deserved notice as a wealth creation factor.

“The first question one might ask a wealthy investor is ‘How did you acquire your wealth?’,’’ said Spectrem president George H. Walper Jr. “While hard work and education are the most popular answers, it is revealing to see how many other choices are selected, and how many investors credit factors that involve good fortune.”

“Hard work” is the answer most often selected, and 96 percent of Millionaires credited hard work as a factor in their wealth. That, of course, means 4 percent did not credit hard work as a reason for their financial success.

When the investors were segmented by age, only 80 percent of Millennial investors (under the age of 36) said “hard work’’ was a factor. However, for all investors over the age of 36, at least 94 percent gave credit to pure effort.

Segmented by occupation, 100 percent of Senior Corporate Executives and 100 percent of Business Owners credited hard work for their financial success.

The benefit of a good education goes a long way toward creating success in any field, and the same is true when it comes to gathering wealth. Eighty-six percent of investors credited their education for their wealth level (which again means 14 percent did not).

Again, the youngest investors were less likely to select “education’’ as a factor, with only 80 percent giving a nod to those that taught them how to do what they do to make money.

So, if there are Millennial Millionaires who don’t credit hard work, education, smart investing or taking risks for their wealth, what do they give credit to?

Overall, 39 percent of Millionaires selected “decisions made for me by my financial advisor”, including 55 percent of World War II Millionaires (over the age of 70), and 62 percent of Senior Corporate Executives.