Millennials Have It - How Did They Get It? 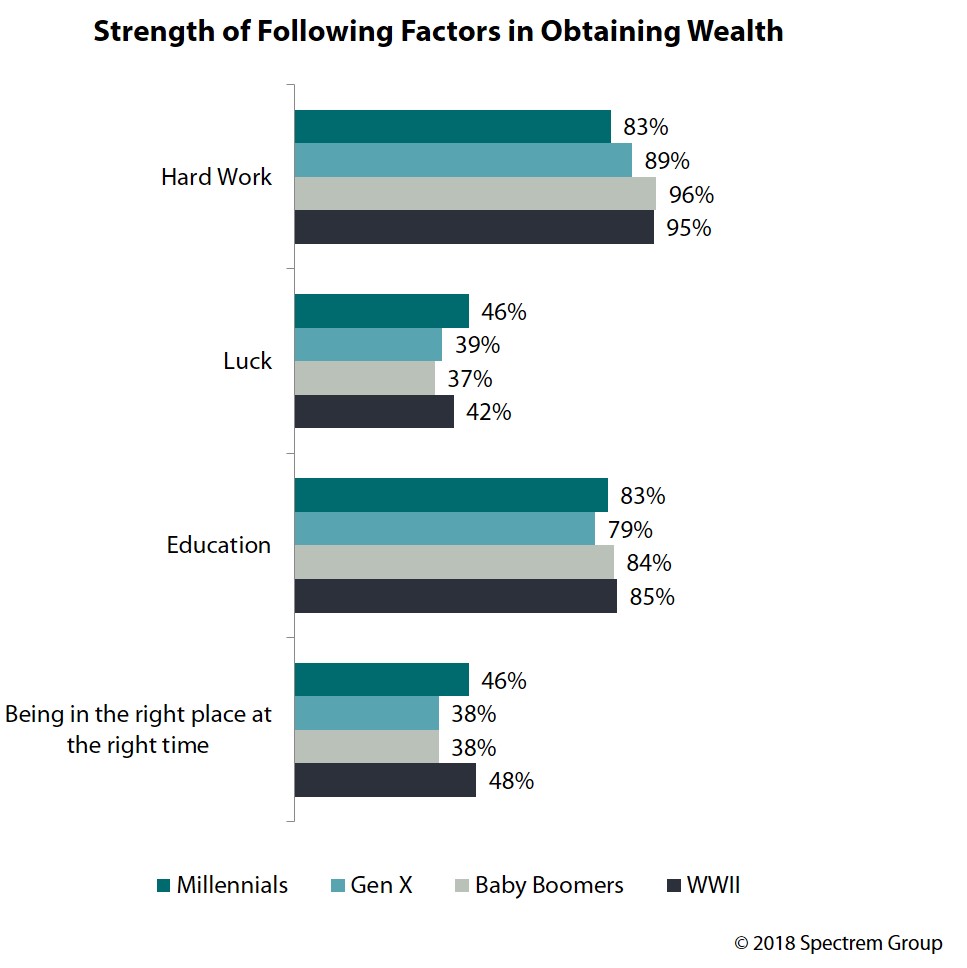 The Millennial generation now has its own money, and some Millennials have a great deal of money.

Spectrem decided to ask them where they got it.

In Spectrem’s new study on the younger generations of investors, respondents were asked to list all of the factors that led to their current wealth level. For Millennials, the answers indicated there was more good fortune involved than for investors from the older generations.

“Advisors benefit from knowing how investors perceive the source of their wealth status, because that information can influence how investors feel toward turning over their investable assets to be invested,’’ said Spectrem president George H. Walper Jr. “The research clearly shows that the factors that led to wealth for the Baby Boomer and World War II generation investors are not necessarily the same factors as contributed to wealth among Millennials and Gen X investors.”

The perfect example of the differences in wealth creation factors is when considering the tried and true factor of hard work. In Millennial And Generation X Investors: Attracting The Next Generations Of Wealth, the Baby Boomer and World War II generation proclaim that hard work got most of them to where they are today financially. Ninety-six percent of Baby Boomers and 95 percent of World War II investors selected “hard work’’ as one of their wealth creation factors.

So, is there a factor the Millennials point to more than other generations as a factor in wealth creation? There is, according to the Spectrem study, and it does not help the reputation of the much-maligned millennial generation.

Forty-six percent of Millennials say “luck’’ was a factor in their wealth creation, and 46 percent say “being in the right place at the right time’’ played a role. In both cases, that was well above the percentages reported by the generations which preceded Millennials, including Baby Boomers, for whom only 37 percent reported “luck’’ as a factor.

Millennials might tell us they are just being more honest than investors from older generations, but there might be something more to their lucky benefits.

Eighty-three percent of Millennials credit “education’’ as a wealth creation factor, higher than the 79 percent of Gen Xers who selected “education’’ as a factor. An educated person might be in a better position to succeed when opportunity knocks; though they credit both “luck’’ and “being in the right place’’ as factors in their wealth creation, both of those situations may have benefited from their educational training and knowledge.

There is another factor that seems to play a significant role in wealth creation for Millennials. Baby Boomers in particular benefited financially from the growth of the nation’s economy since reading adulthood in the 1960s and 1970s, and are currently in the process of transferring that wealth through trusts and estate planning to the generations that followed. Twenty-seven percent of Millennials say “inheritance’’ was a factor in their wealth creation, and that percentage jumps to 67 percent of Millennials with a net worth over $5 million.

Millennials, on average, are reluctant to turn over a large percentage of their assets to their financial advisor, and as such, advisors have not yet had the opportunity to provide advice to greatly benefit the Millennial generation of investors. Only 31 percent of Millennials credited “decisions made by my financial advisor’’ as a wealth creation factor, well below the 40 percent of World War II investors who say they gained financially from working with an advisor.

If you have not discovered this already, understand that Millennials do not correspond to all the previously accepted norms for affluent investors. Many of them grew up in a more affluent atmosphere than those people in their own families who came before them, and that level of affluence affects their perceptions of wealth. Advisors need to take the time to know where Millennial investors come from in terms of their financial and economic backgrounds before advising them properly on investment options.