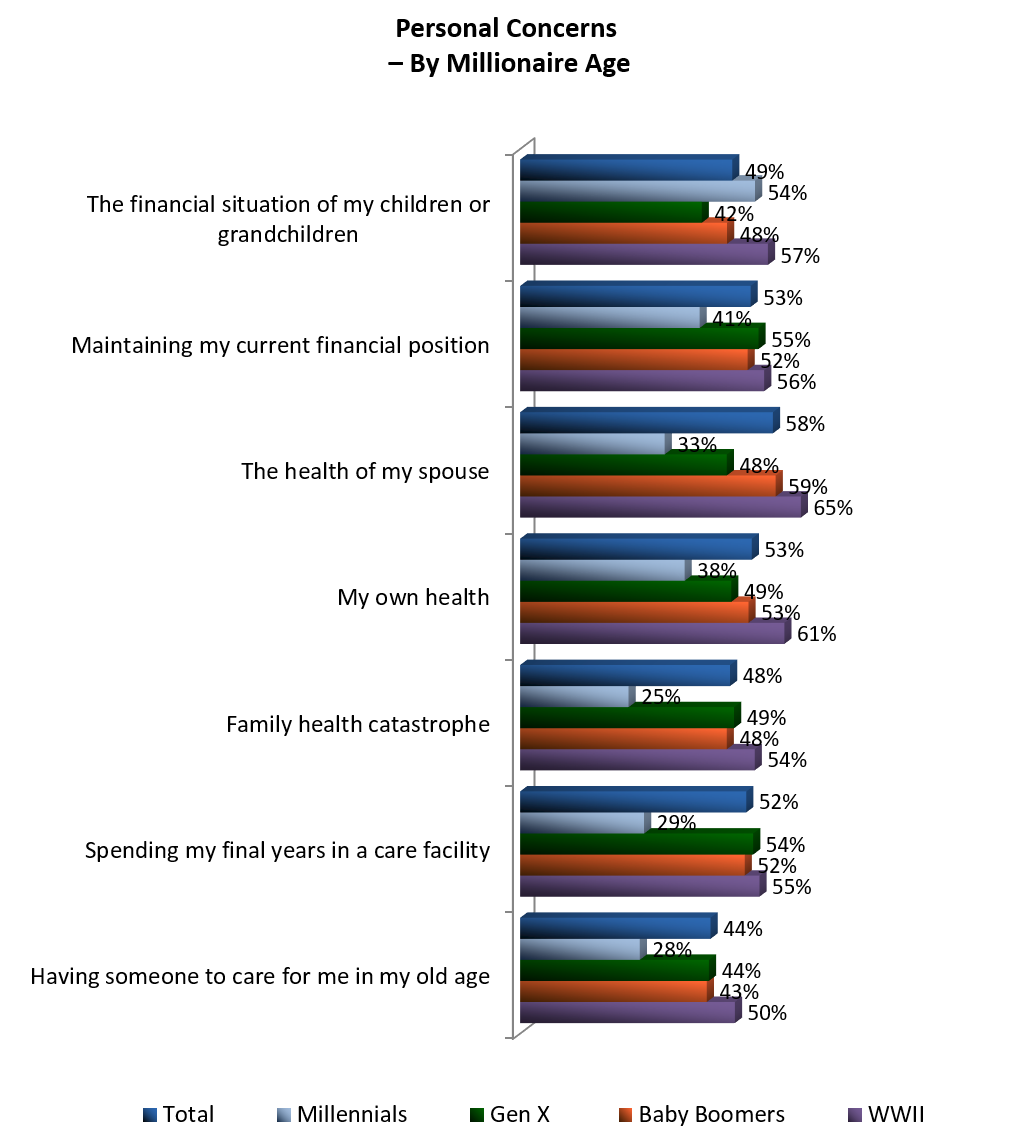 Wealthy people still have personal issues that concern them, and some of those concerns are financial in nature.

Health, occupation and the fortunes of offspring occupy the minds of some affluent investors, and one of the factors determining the level of concern is the age of the investor.

Our newest wealth segmentation series study Financial Behaviors and the Investor’s Mindset investigates the personal concerns of two segments of wealthy investors to determine whether personal matters weigh upon them.

For example, 58 percent of Millionaires with a net worth between $1 million and $5 million profess to be concerned about the health of their spouse.

But, as investors get older, their concern on different topics is altered. Where young investors do not usually have concerns about their own health, the pressures on older investors goes beyond retirement matters.

Among Ultra High Net Worth investors with a net worth between $5 million and $25 million, there has been a 6 percent decrease in the concern over the health of a spouse, from 61 percent to 55 percent. Still, it is the greatest concern of the wealth segment.

The UHNW segment skews slightly older, and 67 percent of the oldest UHNW investors report concern over their spouse’s health.

In the case of Millionaires, 53 percent worry about their own health, and 50 percent of UHNW investors do so. That is also widely varied based on age.

Outside of the health arena, 53 percent of Millionaires are concerned about maintain their current financial situation. That is a much higher percentage than what was reported from UHNW investors (44 percent).

Among UHNW investors, the concern over finances is lower (43 percent overall) and is actually higher among the younger investors (50 percent among Millennials and Gen X investors).

One responsibly that weights upon investors of all ages is taking care of aging parents. Exactly 50 percent of Millionaires and 41 percent of UHNW investors express that worry.

Obviously, UHNW investors are going to have less concern over financial matters than Millionaires, but there is one area in which the UHNW concern level is equal to that of those less wealthy. Fifty percent of UHNW investors are concerned about spending their final years in a care facility, while 51 percent of Millionaires feel the same way. The UHNW concern was identical between age segments and only Millennials (at 29 percent) were well below the 50 percent mark regarding the matter of how they are going to spend their final years.

“It is common sense that investors of different ages will have different concerns, but advisors should recognize the personal concerns of clients initially while realizing that those concerns can change over time,’’ said Spectrem president George H. Walper Jr. “These changes don’t just occur on milestone birthdays; advisors should keep abreast of clients’ personal lives and events to track how financial advice needs might change based on personal matters.”

More importantly, these areas of concern are ones that Millionaires want to discuss. Advisors should always be prepared to devote time in all conversations to listen to these concerns and allay them if they play a role in your investment planning strategies.