February Affluent Investor Confidence Indices Flat, but Up from 2016 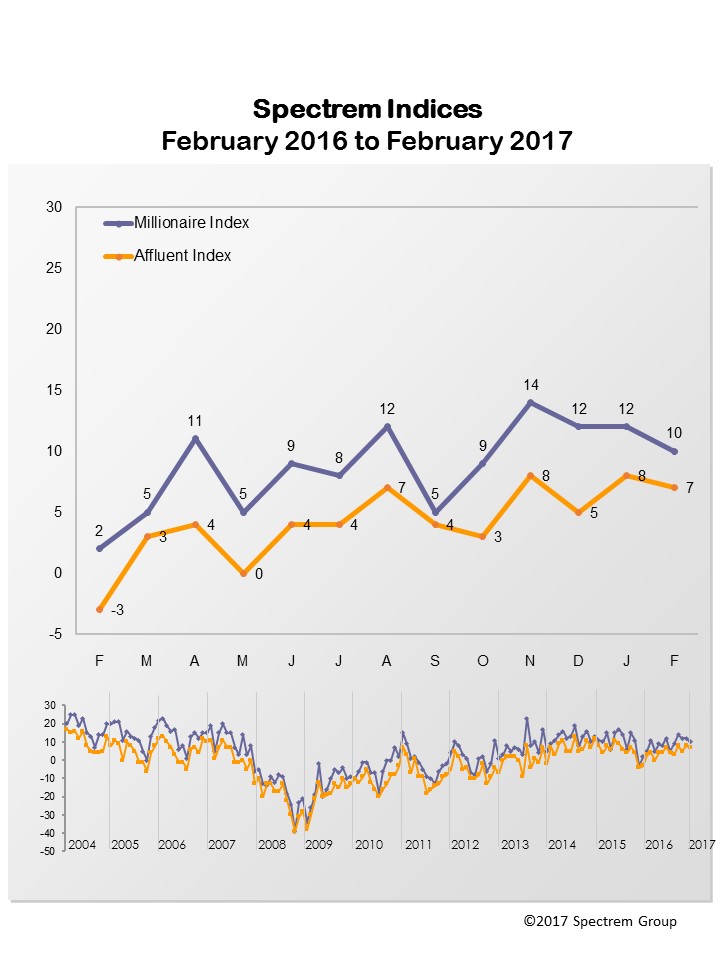 One of the drivers of the Spectrem investor confidence indices, the Spectrem Affluent Household Outlook, was also flat for the second consecutive month. The Outlook is a monthly measure of financial factors that impact the daily lives of Affluent investors. But here, too, all the components of the Outlook—household assets, household income, company health and the economy-- are up in comparison with February 2016.

“The overall flat performance of the Spectrem investor confidence indices is mirrored in a similar dip in the February Spectrem Affluent   Household   Outlook,”   said   Spectrem   President  George H. Walper, Jr. “But there was a marked decrease from  just  after  the election in Affluent investors who indicated that news stories about the political environment were most affecting their economic outlook, and for the second consecutive month, there was an increased percentage  of  Affluent  investors  who  expressed  they  would  move off the investment sidelines in the coming month, just not necessarily into  equities.  Non-Millionaires,  more  than Millionaires, are feeling Wall  Street’s  optimism and are indicating   a surge of confidence in the long-term prospects of the economy.”

The monthly Spectrem Affluent Investor Confidence indices track changes in investment sentiment among the 16.3MM households in America with more than $500,000 of investable assets (SAICI), and those with $1MM or more (SMICI). This month’s survey was fielded between February 16-22, 2017.