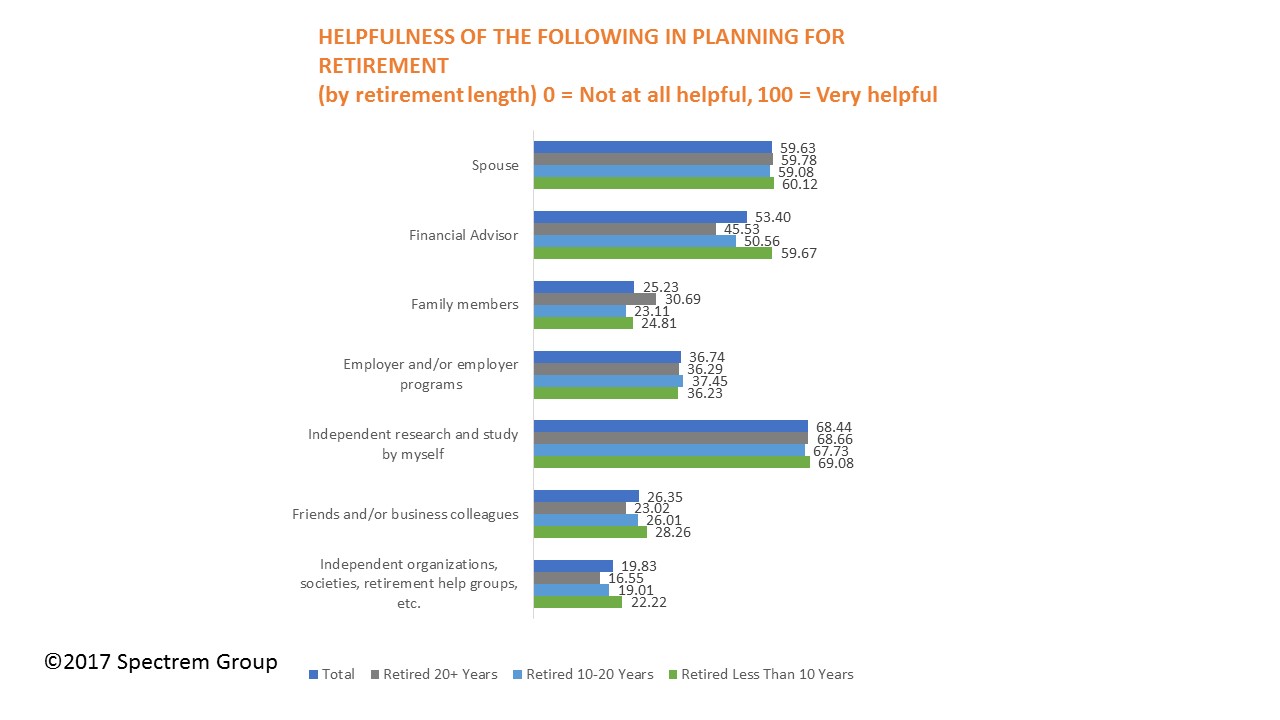 When a person spends 40 years of their life working, they often do so with a constant thought about their family’s needs, earning enough money to provide food and shelter and educational opportunities for a spouse and children.

Oddly, when retirement comes around, these same people seem to avoid involving their family in the decisions they make related to their own financial situation, health and future living conditions.

It’s not as if these investors shy away from their family or disregard them completely, but they often maintain their status as the head of the family. As a result, they tend to make many of their own decisions without requesting involvement from the family members they spent so many years providing for.

Spectrem’s new study of affluent investors in retirement details just how retirees involve their families in retirement decisions. Financial Wellness in Retirement also included interviews with retirees, who tell widely differing tales about just how much involvement family members have in their post-work life, and how much they know about the finances retirees deal with.

“Advisors must be acquainted and familiar with an investor’s family dynamic if there is any reason to believe investments are affected by matters related to spouses or children,’’ Spectrem president George H. Walper Jr. said. “When an investor moves into retirement or is already in retirement, family relations are different but no less significant. This is true even when family relations are strained or seemingly non-existent.”

The Spectrem study asked only one question directly related to the involvement of family in retirement, and that came in the study of a retiree’s plans for future living arrangements. Retirees have a surplus of living options to consider, from staying in their own home and inviting caretakers in to moving into continual care facilities that can provide support for an aging investor as they go through different levels of care needs.

There must be varying reasons why family is not involved in such a life-changing event as retirement. Advisors need to determine the level of family involvement, and as delicately as possible determine if the family can be encouraged to become more involved. While retirement for some is all about travel, eventually it is replaced by time with family, and having family members contributing to the retirement decisions could help make any transition easier.

The report also showed surprising lack of family involvement leading up to retirement. Retirees were asked to rate (on a 0-to-100 scale) the level of involvement of different factors in planning for retirement. While “independent research’’ led the category with a rating of 68.44, and “spouse” came in second at 59.63, “family members” was rated extremely low, at 25.23. That was lower than financial advisor (53.40), employer/employee programs (36.74) and “friend or business colleagues (26.35).

The desire to keep family involvement to a minimum is apparently a result of the overwhelming parental attitude to avoid bringing children into an adult’s problems. Asked to name their No. 1 biggest challenge in retirement,  11 percent said “getting additional care without burdening my family”, which ranked only behind “managing medical care” and “determining appropriate risk for investments” as the biggest concern of retirees.

The study included qualitative interviews with retirees with at least $500,000 in net worth, and while some retirees depend on their family to provide support later in life, there was an extensive percentage of retirees who did not talk to their children about their retirement plans.

“We have not gone over anything with the children,’’ said one retiree. “We have a living trust, and if something happened to either one of us they would know what to do from that. But we have never told them (the name of their advisor). That might not be a bad idea.”

Assess how your investor is entering retirement psychologically. Those who are healthy and ready to travel the world may not see the need to involve family (although an advisor might suggest they think about the future). Those who are going into retirement kicking and screaming may need to hear a suggestion that they look to their family for some guidance on how to make the most of their future.

Some retirees (probably more often the men) want to remain the family leader and as such do not want to show any weakness. Asking for help is a sign of weakness to some. But by indicating the advantages, both financial and psychological, of involving the family, advisors can help retirees get the most out of their retirement years.