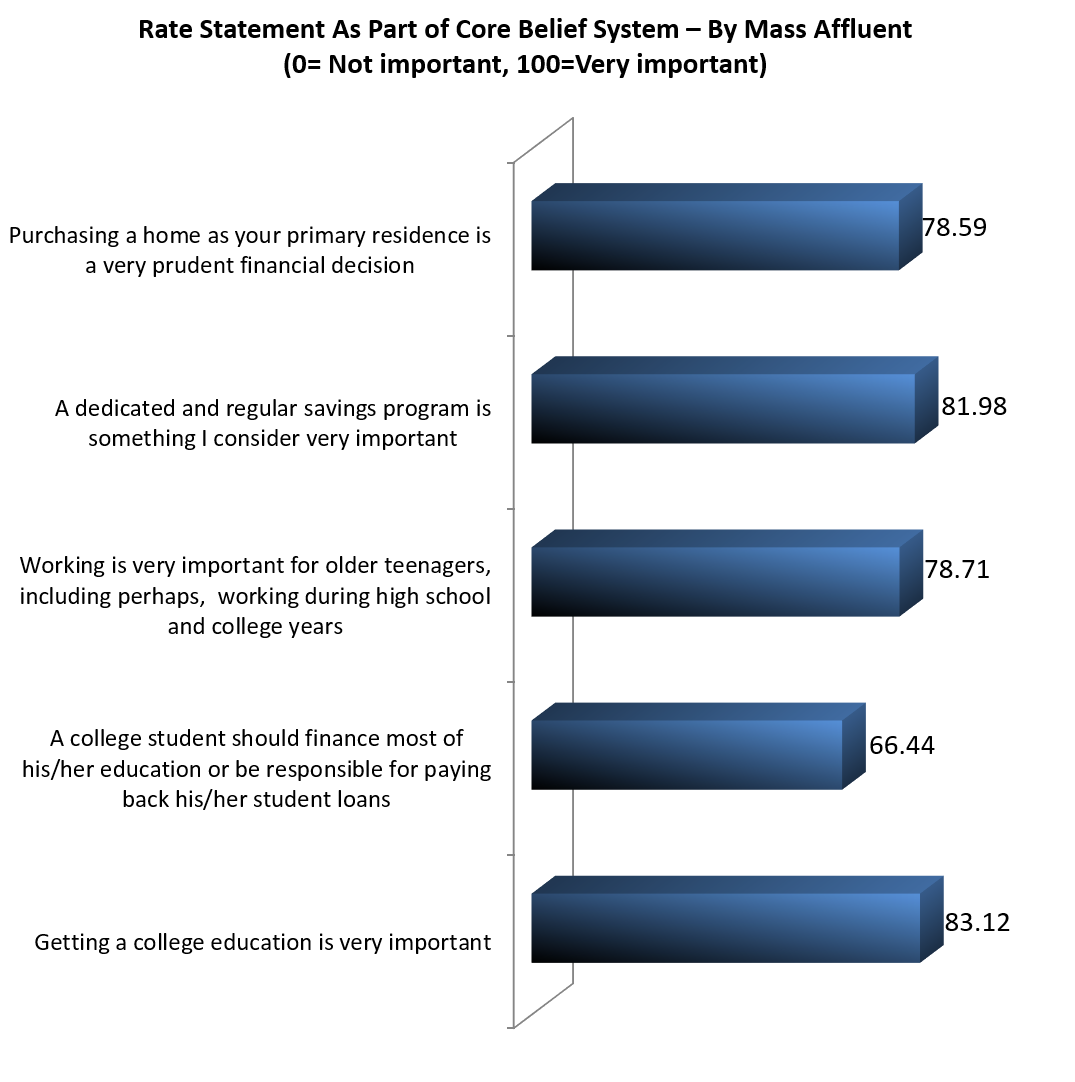 The American Dream endures. James Truslow Adams coined the term “American Dream” in his 1931 book, “The Epic of America.” He defined it as “that dream of a land in which life should be better and richer and fuller for everyone, with opportunity for each according to ability or achievement… in which each man and each woman shall be able to attain to the fullest stature of which they are innately capable, and be recognized by others for what they are, regardless of the fortuitous circumstances of birth or position.”

Education, savings, and work ethic are among the aspirational foundations of the American Dream and its promise of fulfilling one’s potential, according to  Financial Behaviors and the Investor’s Mindset, our new wealth segmentation series study of Mass Affluent households with a net worth between $100,000 and $1 million (not including primary residence).

On a scale of 0 to 100, on which 100 = “very important,” Mass Affluent investors gave the highest score (83) to the core belief statement, “Getting a college education is very important.” Our previous research reinforces the high premium Affluent investors place on education. They rank it second only to hard work as the primary factor in their wealth creation. Nine-in-ten Millionaires cite their college education as a contributor to their success.

Of near-equal important to Mass Affluent investors is their core belief that work is very important for older teenagers (78.71 on the scale) and that purchasing a home as a primary residence is a very prudent financial decision (78.59).  Of the core beliefs considered, the lowest score (66) was given to the statement, “A college student should finance most of his/her education or be responsible for paying back his/her student loans”).

Analyzing our core beliefs research by age finds that regardless of generation, getting a college education is considered to be of paramount importance, with Mass Affluent respondents from the World War II generation especially fervent in this belief (86 on the 100-point scale). Mass Affluent Millennials ages 35 and under rank lower on the scale the statement that a college student should finance most of their college education or be responsible for paying back their student loans.

Baby Boomers and WWII generation Mass Affluent respondents were also more likely than younger generations to give a higher ranking on the core belief importance score to the statements, “Purchasing a home as your primary residence is a very prudent financial decision” and “Working is very important for older teenagers, including working during high school and college years.”