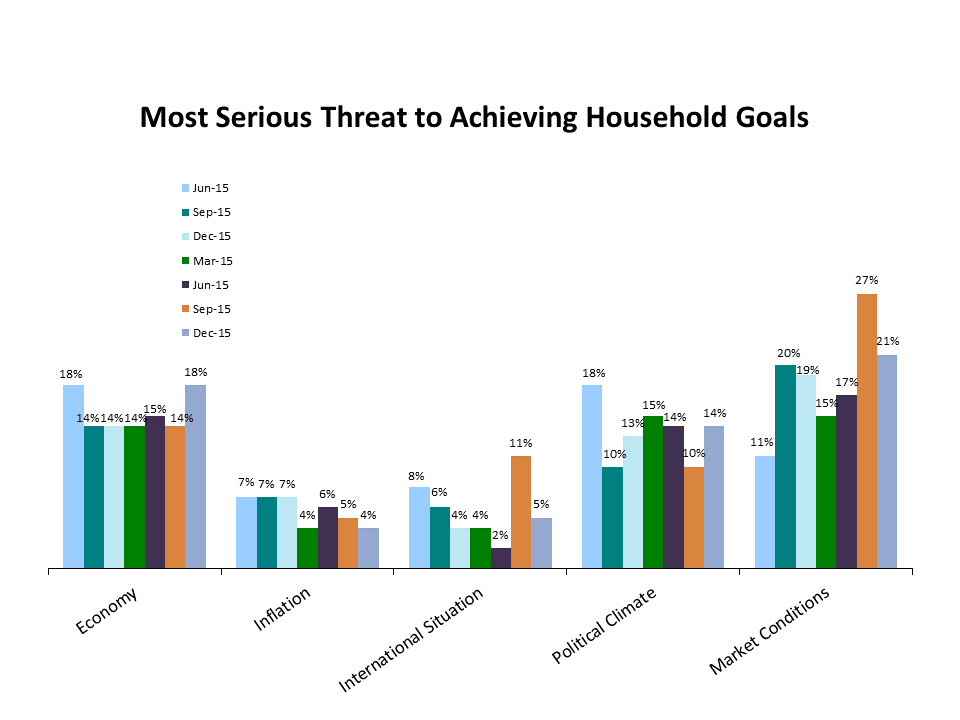 Last September, when Spectrem Group surveyed Affluent investors about what they considered to be the most serious threats to achieving their household’s financial goals at that time, the highest percentage (27 percent) responded, “market conditions.” Concerns then were escalated over the slowdown in China’s economy. In December, Affluent investors once again cited market conditions as the most serious threat to achieving their household’s current financial goals, but there was a dip in the percentage who thought so, 21 percent.

At the time the December survey was being fielded, the Federal Reserve raised interest rates for the first time since 2006, ending years of speculation. The November jobs report, released at the beginning of the month exceeded expectations leading analysts to forecast that the time had come for the Fed to act. The Dow Jones industrial average initially rose on the Fed’s announcement, but then plummeted 253-points the next day and then 367 points the day after that for the largest one-day plunge since last September.

The latter is becoming especially turbulent heading in to the presidential year. In addition to the combative campaign for the Republican presidential nomination in which the divisive Donald Trump is the frontrunner, the G.O.P and the Obama White House are at odds over the President’s response to ISIS and terror attacks that devastated Paris and, in the most recent incident on Dec. 9, San Bernardino, Calif. The president’s critics also questioned his prioritization of the issue of climate change. In December, world leaders reached a deal in Paris by which participating countries pledged to reduce its emissions.

To a much lesser extent, Affluent investors cited inflation (4 percent) as the most serious threat to achieving their household’s current financial goals, while 5 percent said “the international situation.” The latter is down from 11 percent three months ago.

To see a preview of the Spectrem Newsletter, click here