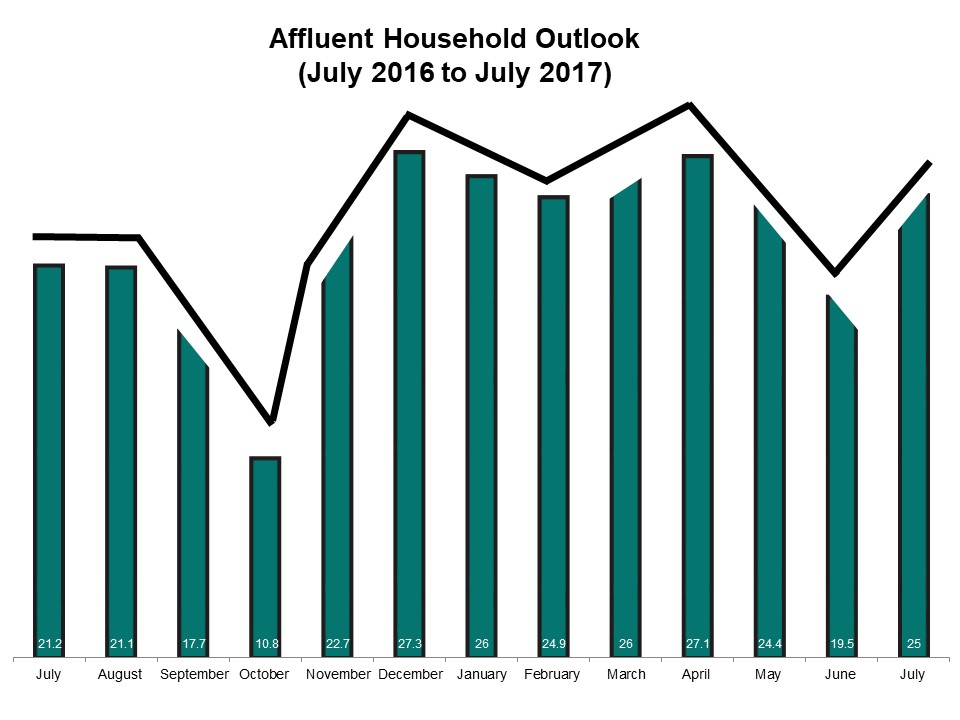 That sound you hear is the Spectrem Household Outlook rebounding from its depressing attitude in June to a more optimistic view in July.

The Outlook is comprised of investor rankings of four financial components in their lives, and almost all component ratings rose in July, among both Millionaires and non-Millionaires.

Here is a look at each component:

This is also the component that sees near-identical numbers between Republicans (45.92) and Democrats (45.71).

This is the most positive gain among all components overall, indicating a strong belief in the future of a household’s income. Among Millionaires, the 32.17 rating for Household Income was the highest since May of 2014, more than three years ago. Similarly, the 25.23 rating for Household Income among Non-Millionaires was the highest in more than two years.

The Household Income rating was highest among Democrats at 37.14 and lowest among Republicans at 20.41.

There is a huge disparity between Republican and Democrat investors in rating the Economy, from 47.96 among Republicans to (28.57) among Democrats.

This corporate outlook is still rebounding from a significant drop in May, and is spurred by greater optimism among Millionaires, who had a very pessimistic rating for Company Health in June, when the Millionaire rating was actually below that of non-Millionaires. Order has been restored in that regard, but female investors rated Company Health slightly higher in July than did male investors, which also is out of the norm.