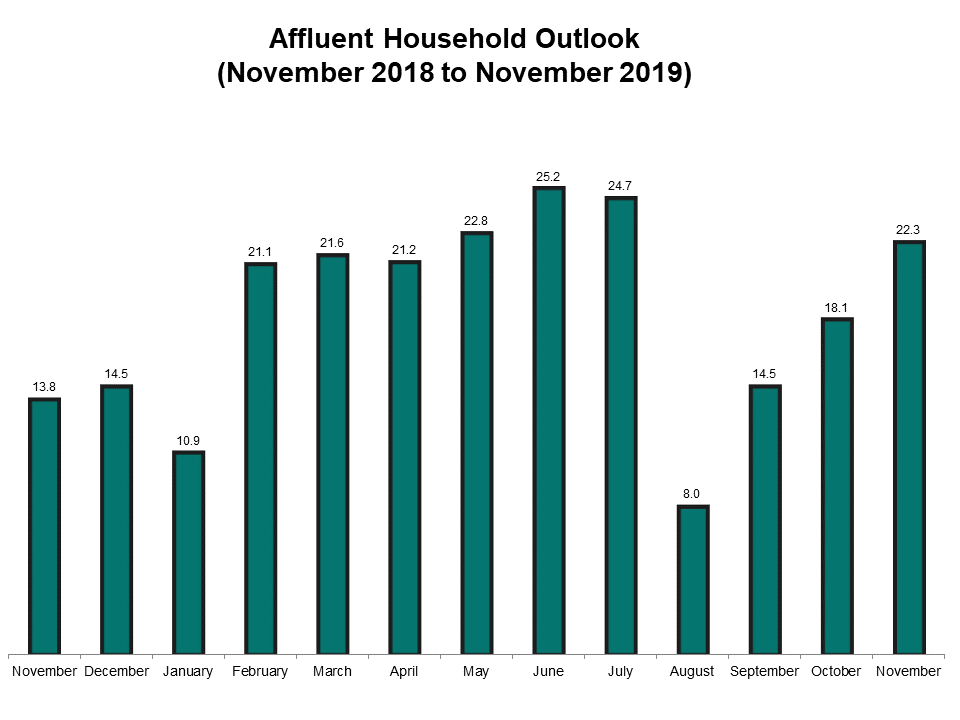 Spectrem’s Household Outlook asks investors to judge their outlook for four components of their household finances, and the American economy is the most volatile component of the four.

It is also the one that dips the furthest when it gets a bad rating. In recent months, the dip has been significant, well into negative numbers in Outlook ratings from all investors.

But in November, the Outlook for the economy bounced back. It’s barely above the zero mark overall, but it is there.

The Spectrem Household Outlook asks investors to rate their feelings about their Household Assets, Household Income, Company Health and the Economy, In November, with the stock market rollicking its way to record highs on a daily basis, the rating for the Economy climbed up from -14.80 among all investors to 1.60, its highest rating since June,.

When investors are segmented, those with the best Outlook for the economy are those non-Millionaires in the survey (with an Outlook of 4.10), working investors (5.20), and Republicans (no surprise at 35.79). But all Outlook ratings for the Economy moved up.

The stock market raised all Outlook numbers, and overshadowed the continued argument about impeachment of President Donald Trump and whether the United States and China will ever reach a trade agreement over all aspects of their trade relationship.

The Spectrem Investor Confidence Indices survey was conducted from November 20-25, 2019, and came amid daily record highs for the Dow Jones Industrial Average, S&P 500 or NASDAQ. Those record numbers, including reaching over 28,000 for the DJIA, are responsible for higher Outlooks as well for Household Assets and Household Income.

It’s odd that Millionaires maintained their negative Outlook for the Economy, but they may have in mind the saying that “the stock market is not the economy.” Millionaires have had a negative rating for the economy for four months, although they usually have a higher Outlook than the non-Millionaires. In November, non-Millionaires improved their Outlook more than 25 points to 4.10, compared to -0.78 for Millionaires. Even retired investors moved positive on the Economy, improving their rating to -1.92, in comparison to the -26.97 Outlook they had in October.

The fear of recession and tariff wars continue to hold back a complete salute to the way the American economy is currently operating.

The Outlook for Household Assets has been moving up as the stock market has climbed, and it is now in a three-month positive run, climbing from an Outlook of 36 in August to the current 43.60. Household Assets is a consideration of investment assets, and as such, Millionaires are more likely to have a higher Outlook than non-Millionaires. But retired investors rate their Household Assets closely, and their Outlook for November was 25.00, a slight improvement from October but well below Outlook numbers in the 40s earlier in the year.

After three months of increases, the Outlook for Household Income fell in November. However, last month’s rating of 31.20 was the highest mark for the Outlook since December of 2007, just before the Great Recession hit.

This component moves only slightly from month to month, but its November rating was the highest since July. Company Health reflects corporate earnings reports as well as employment decisions by the big firms in America. It is also the component most likely to reflect investor sentiment around tariffs, subsidies and global trade negotiations.