Don't Call Us, We'll Call You 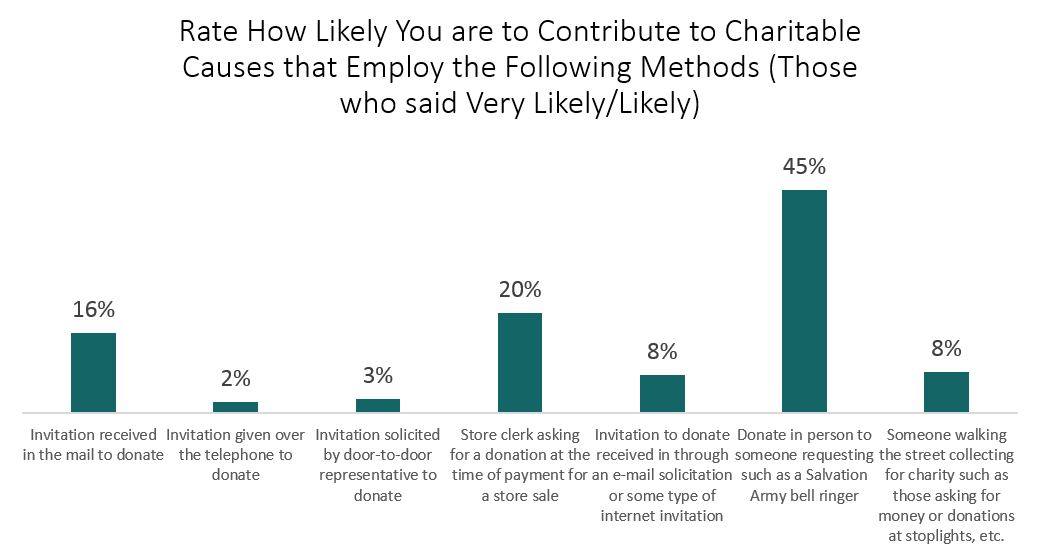 Our research shows that a significant majority of Millionaires investors, with a net worth between $1 million and $5 million, contribute up to $5,000 annually. Almost one-quarter of all Millionaires contribute more than $5,000.

But there is a reluctance among affluent investors to make donations to charitable organizations based on unsolicited pleas.

Our new survey of affluent investors asked them how likely they are to contribute to a charitable cause based on different solicitation procedures. Less than half of all investors indicate a willingness to contribute to unsolicited requests for donations from electronic sources as well as the human ones.

“Wealthy investors prefer to donate to organizations they know, or have a personal relationship with,’’ said Spectrem president George H. Walper Jr. “Our survey indicates that some investors do hand over cash when asked, while others respond to email pleas, but for the most part, they avoid making sudden and unplanned donations, even when it comes to dropping a bill or two into a Salvation Army kettle.”

The most popular way investors make a sudden donation to charity is by dropping some money into the Salvation Army bowl when walking through the city streets or shopping malls during the winter holidays. Forty-five percent of affluent investors say they fall victim to the ploy, stopping by at a bell ringer to say “Merry Christmas’’ while dropping their donation into the bowl.

Occasionally, stores have solicitation deals with large charities to accept donations upon making a sale. Twenty percent of affluent investors are willing to make a donation in the process of completing a purchase at a store.

Sixteen percent respond positively to donation invitations received through the U.S. postal system, while 8 [percent respond to email or electronic solicitation, and 8 percent make a contribution when they see a fireman or school-age person standing in an intersection looking for whatever a driver has on hand.

They do not respond in any way to solicitations that come over the telephone, or when a door-to-door representative knocks. Fraud investigators say both of the old-fashioned methods are ripe for fraud.

Interestingly, in all cases, wealthier investors are less likely to make such sudden donations, or respond to requests for one-time new donations. For example, while 36 percent of investors with a net worth under $100,000 (not including primary residence) respond to the store clerk asking for a donation during a transaction, only 12 percent of those with a net worth over $5 million fall for that ploy.

What is more effective, according to industry spokespeople, is when Facebook friends or Twitter follows discuss their own contributions, particularly to crowdfunding sites. This is known as peer-to-peer fundraising. It’s similar to restaurants asking customers to post good reviews on sites like Yelp. Word of mouth goes farther than a direct plea.

Direct email pleas have the highest rate of return of any marketing channel and is considered the most successful online fundraising channel. But less than 1 percent of all visitors to a charitable organization website actually make a donation there.