Do Women Worry More Than Men?

Men and women worry about different things, but does one gender worry more than another?  Are there issues that bring a greater level of concern to women or men?  Which gender is more likely to be worried?

According to research from Spectrem Group, women worry more than men.  When asked about various concerns relating to retirement, health, and financial concerns, in almost every category female investors are more concerned than male investors.  The difference may only be slight in some cases while others the difference in level of concern is significant.

Retirement and being able to retire when desired is one area where the difference between men and women and the level of worry is noticeable.  Twenty-six percent of men are worried about being able to retire when they want to, while 35 percent of women are concerned about the same issue.  When concerns of receiving an adequate amount of help and advice to reach financial goals, female investors again take the lion’s share of the worry, 31 percent to 22 percent. 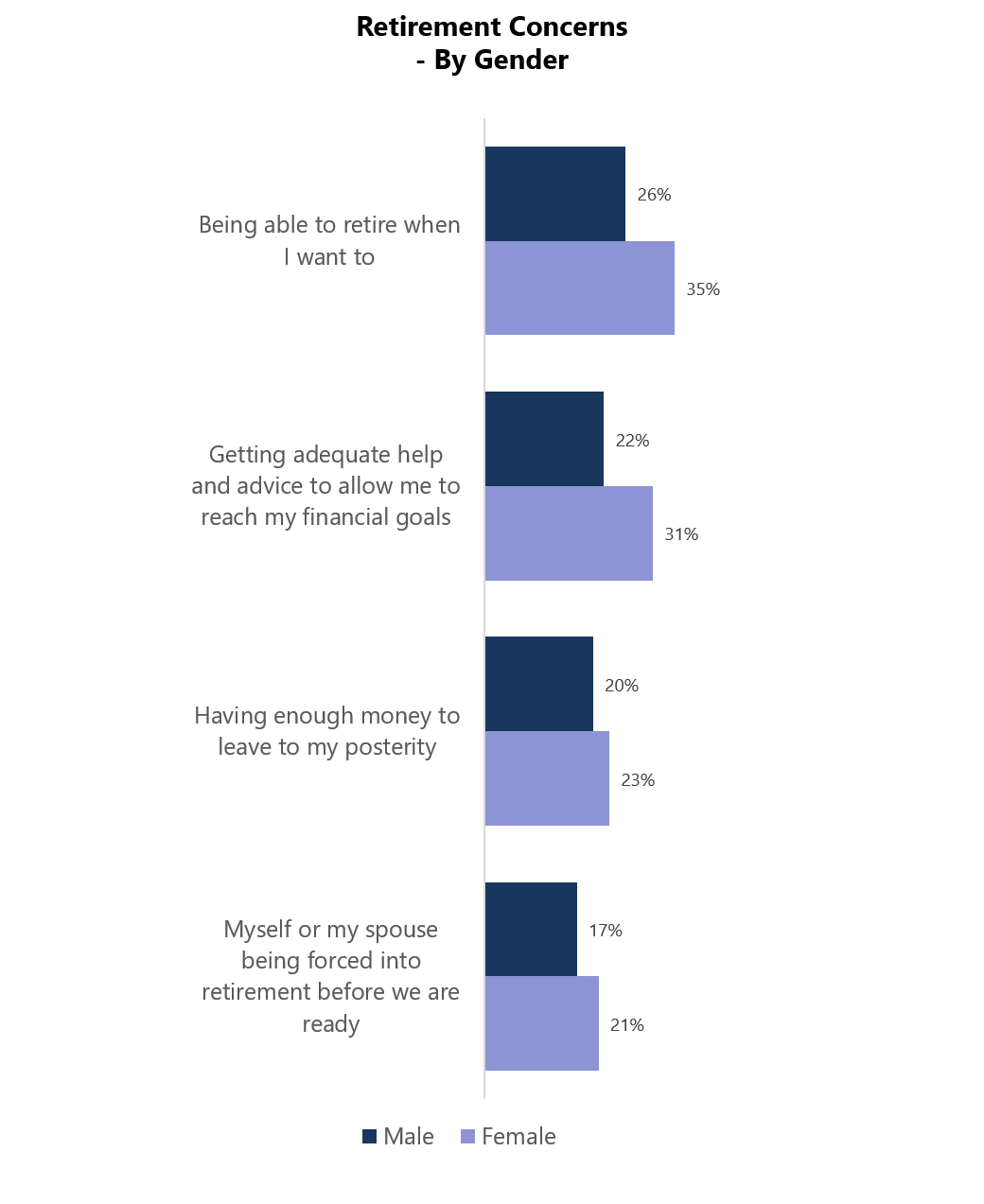 Health concerns for their spouse or their own health are equal among men and women, however the possibility of having to have someone to care for them in their old age is a concern that is plaguing women far more than men.  Over half of women are concerned about needing care in their old age, while only 40 percent of men voice that concern.  This level of concern is also seen when considering the possibility of spending final years in a care facility.  Fifty-three percent of women are concerned about that potential, while only 46 percent of men feel that way.

Women are also far more concerned about being able to maintain their current financial position than men, 54 percent versus 47 percent.  It is not surprising then to find out that men are far more likely to have an aggressive risk tolerance, where women are far more likely to be conservative in their risk tolerance.  Women also are not as interested in being actively involved in the day-to-day management of their investments as men, 38 percent versus 53 percent of men who like to be actively involved in the management of their investments.

The challenging component to this situation is that in many cases, both parties are involved in decision-making for a household.  Interestingly, over three-quarters of women feel that financial decisions are made jointly with their spouse in their household, yet over half of men indicate that the husband makes most of the financial decisions.

Financial professionals need to address the different, and often competing, concerns of both spouses when working with a joint household.  Knowing how to approach risk, how involved each of them want to be, and who makes the decisions, are all components of ensuring the financial professional is able to have a successful working relationship with the couple.