Do Wealthy Investors Know What a Fiduciary Is? 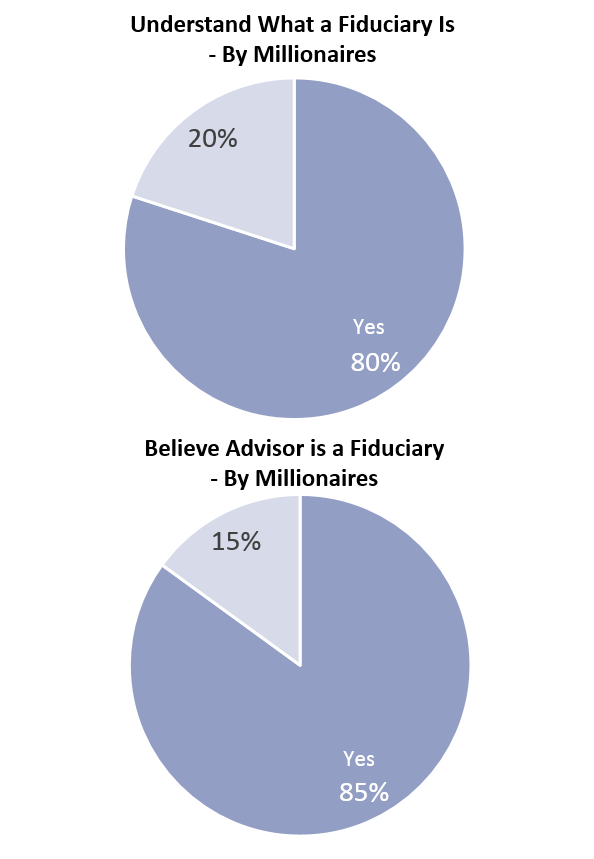 Millionaires put a high premium on financial knowledge and are more likely than their less-wealthy counterparts to consider gaining it very important, our research finds. Whether they obtain it through their own research or from a financial advisor, they are significantly more likely to consider themselves “very knowledgeable” about financial products and investments. Does this knowledge extend to the concept of a fiduciary relationship?

Market Insights 2016 highlights our key research findings in the affluent market and illuminates many facets of the wealthy investors’ mindset, from advisor usage and investment trends to distribution of their assets.

The question of whether these affluent investors consider their advisor to be a fiduciary is yet another indication of the confidence that the wealthiest have in their perceived financial knowledge. But is it justified, especially regarding whether they think their financial advisor is a fiduciary?  Interestingly, all three wealth segments, a roughly equal percentage (85 percent) believes that their advisor, regardless of the type of advisor he or she might be using, is a fiduciary. The dichotomy, though, is that few are.

This issue continues to be on the front burner as the Department of Labor works to finalize its new game changing fiduciary standard applying to financial advisors of individual retirement accounts (IRAs). We asked affluent investors whether they understand what a fiduciary is. Nine-in-ten Ultra High Net Worth investors with a net worth between $5 million and $25 million (not including primary residence) report that they do. In comparison, 80 percent of Millionaires with a net worth up to $5 million reported likewise, while only 60 percent of Mass Affluent investors with a net worth between $100,000 and $1 million said they understand what a fiduciary is.

Are they right? And what does this mean to them?To Ultra High Net Worth investors, a fiduciary relationship is most likely to be defined as a legal or ethical relationship, a relationship involving the care of assets and that a professional is looking our for their client’s best interest.

How are Millionaires most likely to define a fiduciary relationship? The highest percentage (32 percent) consider it first a foremost a relationship including the care of assets, followed by a relationship in which a professional is looking out for their client’s best interest, and a legal or ethical relationship (27 percent each).

Comparatively few across all wealth segments define a fiduciary relationship as one based on confidence, good faith and trust, but Mass Affluent are more likely than their wealthier counterparts to define it in this manner (12 percent vs. 11 percent and 9 percent, respectively).