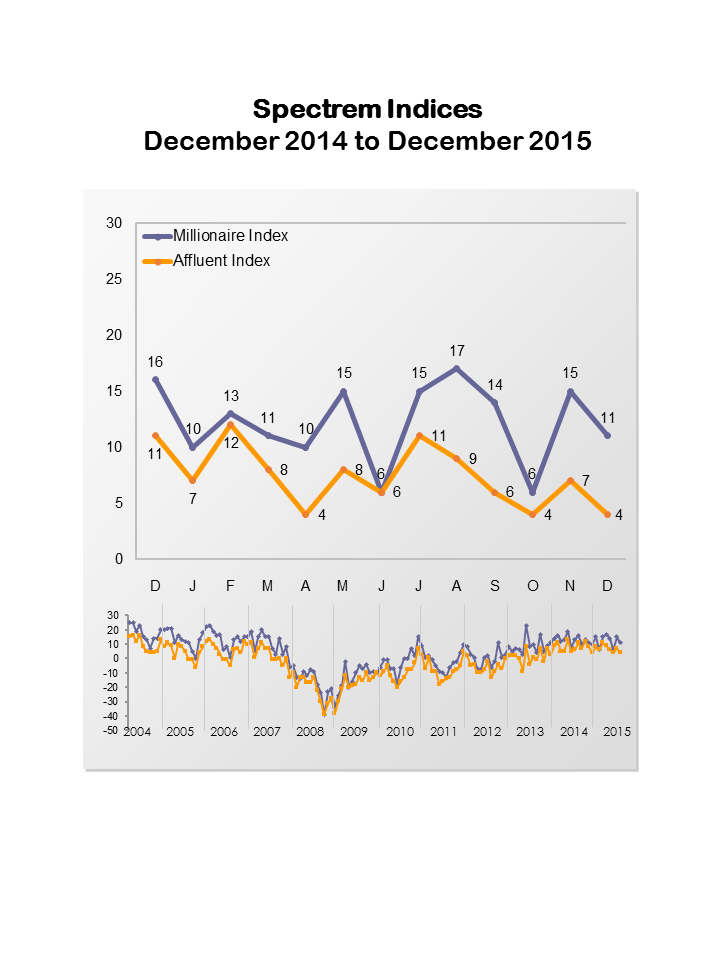 The Spectrem Affluent Investor Confidence Index (SAICI®) dropped 3 points in December to 4, while the Spectrem Millionaire Investor Confidence Index (SMICI®) fell 4 points to 11. The indices measure the investment confidence and outlook of the 16MM households in America with more than $500,000 of investable assets (SAICI), and those with $1MM or more (SMICI). This month’s survey was fielded between Dec. 14-21.

On Dec. 16, the Federal Reserve, ending recent heightened speculation, announced it would raise interest rates for the first time in almost a decade. The Dow Jones industrial average initially rose on the Fed’s announcement of the quarter point increase, but then plummeted 253-points the next day and then 367 points the day after that for the largest one-day plunge since last September.

Affluent investors told us in December they consider market conditions to be the primary threat to achieving their household’s financial goals at this time. The Dow Jones industrial average and the S&P 500 ended 2015 down 2.2 percent and 0.7 percent, respectively. It was the worst year for both indices since the 2008 economic collapse in 2008.

These market conditions were another contributing factor to the decline in the Spectrem indices. December was the fourth consecutive month in which more Affluent investors than in the previous month indicated that, for the short term, they would hold on the investment sidelines rather than invest. This stance rose to a 16-month high.

Another downward driver of the indices was a drop in the Spectrem Affluent Household Outlook, a monthly measure of long-term confidence in financial factors that impact Affluent investors’ daily lives. In December, the Outlook fell to a 22-month low, as Millionaire and non-Millionaire households indicated weakened confidence in the economy from the previous month.

To preview the Spectrem Newsletter and index, click here