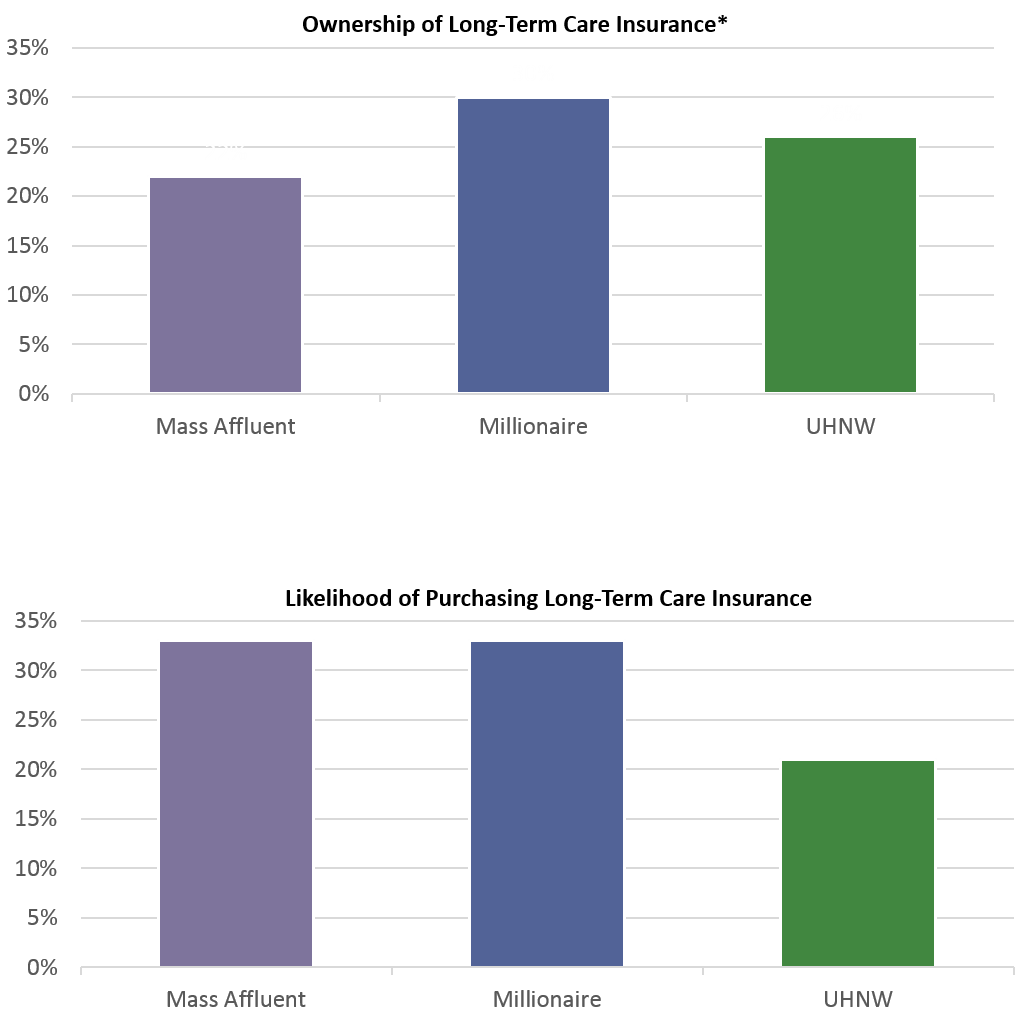 Americans are living longer, and the need for long-term care is expected to expand as people live more years.

Insurance companies are rethinking the need to sell long-term care insurance, because it is expensive to them, when policy holders use the insurance coverage to its fullest extent.

The industry is trying to determine what to do in the face of a cost analysis that says long-term care insurance is not a profitable mechanism.

Where does this argument end?

Spectrem’s recent whitepaper, Decisions Regarding Long-Term Care Insurance, details not only the current ownership level of long-term care insurance among wealthy investors, but also the interest level in future ownership. Current ownership ranges between 20 and 30 percent, depending on wealth, while future ownership ranges between 20 and 33 percent, again depending on wealth.

The insurance industry has taken note. While more than 100 companies offered long-term care insurance 10 years ago, the number is now down to around 20. While premiums are expensive enough to cause some investors to forego purchase, claims themselves are expensive, and with Americans living longer, more claims are being made.

As a result, insurance companies are wary about issuing policies that will end up costing the company more than it makes in premiums.

Insurance companies are also declining long-term care insurance in 20 percent of applications due to existing medical conditions, such as obesity or disability.

According to the American Association for Long-Term Care Insurance, a California-based industry trade group, a typical basic policy provides $164,000 in coverage. Premiums for a 60-year-old couple buying policies for each of them range from a combined $1,685 to $2,813. However, according to the Federal Long Term Care Insurance Program calculator, a 60-year-old single male wanting $200 per day in compensation for five years ($365,000 in benefits) will pay $3,800 per year in premiums.

There are changes being made in the policies themselves to make them more attractive and easier to pay for in some cases.

As it works, the policies cover long-term care up to the coverage limit. If those funds are not used in total, the balance is paid out to beneficiaries upon death, similar to a regular life insurance policy.

There is also a new annuity-LTC insurance package being offered but only by a handful of companies.

Long-term care policies have also changed in terms of benefits paid. Where in the past it was an all-or-nothing proposal with only one level of benefits paid, consumers today can choose between policies levels on the theory that some protection is better than none.

Yet another complication to the long-term care insurance proposal is that 70 percent of consumers believe the Affordable Care Act will provide health-care benefits in the case of long-term care, which is not true.

According to the American Association for Long-Term Care Insurance, most people start planning for long-term care between the ages of 52 and 64, but advanced age does affect premiums.