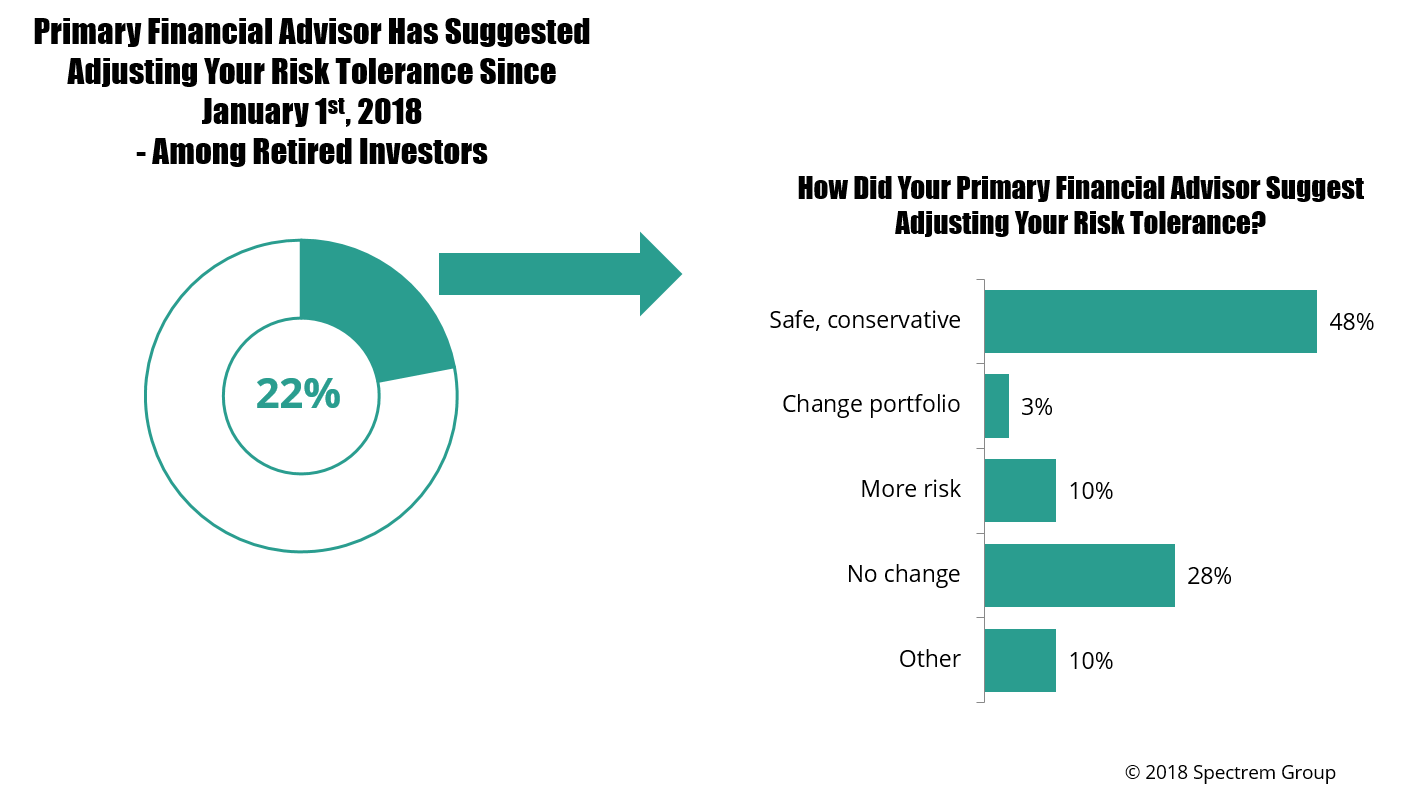 Retired investors are, by nature, more conservative than investors who are still in the working world. Their income and expenses are more static, their lifestyle is more staid, and there is less fluctuation in almost all areas of their lives.

So when advisors tell retired investors they need to be more conservative in their investment decisions, that is a big deal.

The current atmosphere for investing is clouded due to changes in the United States’ relationship with other key trading partners like China, Russia, Mexico and Canada. Constant changes in tariff levels predict an upcoming trade war, and the global nature of investing today means an international trade war is very bad news.

Spectrem’s monthly survey of affluent investors includes questions that relate to very current events, and in July investors were asked if their primary financial advisor was suggesting a change in the risk tolerance of investments due to the current state of investing in America. Among retired investors, 22 percent said they had been encouraged to alter their risk levels.

Considering their risk level is already set fairly low, a suggested change might be expected to go for greater risk. However, of those retired investors encouraged to change their investment risks, 48 percent said they were told to become more conservative in their decisions. Such advice screams concern over the uncertainty of investments in the near future.

Twenty-eight percent of retired investors encouraged to make changes in their investment strategy were told to alter their portfolio, which is a significant move to make in response to current investment conditions.

Retired investors were also asked to state the best piece of advice they have received from their advisor since the Presidential election in November of 2016. Fifty-six percent of retired investors said they were told to hold the course, almost double the percentage of working investors (29 percent) who were told maintain their current investment plan.

Asked specifically about the impact of changes in tariffs among the world’s most powerful economies, only 35 percent of retired investors expect tariff talk to have an impact on their investments. However, 65 percent of retired investors said they would be paying closer attention to international economic conversations as a result of the rising frequency of tariff negotiations and arguments.

Only 17 percent of retired investors have been warned to consider making changes in investment strategies due to the anticipated increase in the federal interest rate.

Should advisors be discussing interest rates, tariffs and trade wars with investors? The answer to that question is dependent on the type of investments the investor has. But providing a warning of potential changes in the investment climate due to trade wars or interest rate changes is one of the key functions of a financial advisor, who is expected to be tuned in to such topics more directly than an investor.