Choosing a Trustee: Self and Institutional Trustees 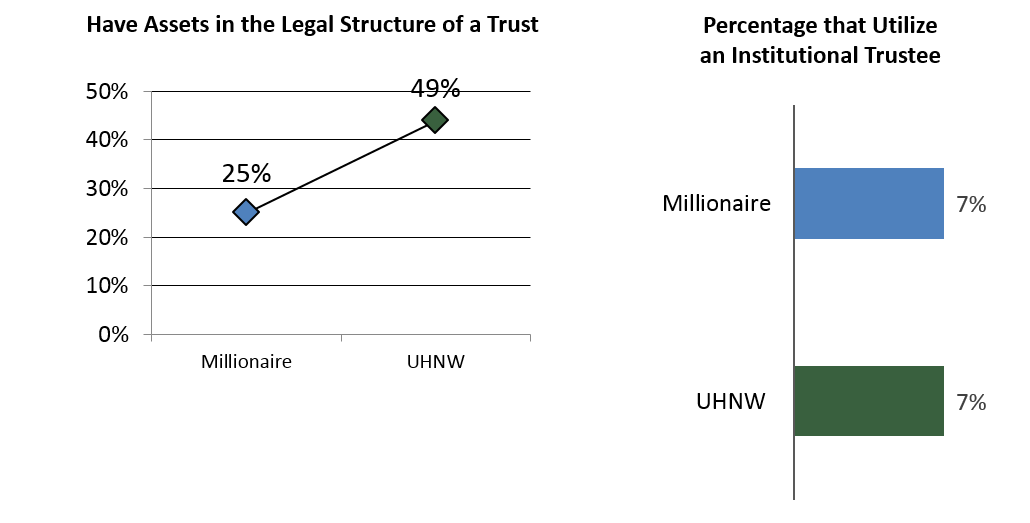 Creating a personal trust is, almost by definition, a personal decision. Establishing the manner in which your personal wealth will be handled and then distributed sometime in the future requires some very intimate decisions about your family that currently exists and family that may not even yet be created.

Handing those personal decisions over to a corporate entity takes a great deal of belief that an institution that will be making money off of your trust will act in the best interests of your family, and understand the complicated nature of the decisions that need to be made.

Which is why some people choose to act as their own trustee rather than use a corporate or institutional trustee to handle those decisions.

There are 10 million Millionaires in the United States. There are more billionaires now than ever before. A trust, which allows the owner to state specifically how funds will be used and can protect those funds from tax liabilities, has long been thought of as an adequate way to handle great wealth.

There are several reasons investors choose to self-trustee, and one of them is the belief that the investor will have a greater understanding and appreciation of the family situation than a corporate trustee would.

For our new report, Choosing a Trustee, we spoke at length with investors who set up trusts. Of those we spoke to who are handling the trust without the assistance of a corporate or institutional trustee, many explained the desire to take care of personal matters personally.

“One reason would be just for the certainty as to what happens in the event that something happens to my wife and I,’’ said one trustee. “I feel that handling the trust ourselves allows for some certainty as to the distribution of assets and the most effective cash treatment.”

Several investors told us that they talked to a corporate trustee initially, but felt that the conversations did not go the way they wanted them to in regards to the needs of the future generation of the family.

“That was done, and we eventually felt that you need to know the person setting up the trust wants you to think through the children, and go into how (asset should be distributed”,’’ an investor said.

Some investors handle many of their own financial affairs, and there is a belief that even in the matter of establishing a trust, there is enough information on the Internet to teach a knowledgeable person how to handle the process to keep a stranger out of the mix.

“I feel like I have a fairly good understand, and I am always engaged with my accounts,’’ said one investor. “That why I like (the decision to self-trustee). Sometimes, I think that when you turn things over to other people, they might not have the personal stake in it that you do.”

There are, however, those investors who chose to self-trustee on the belief that they could handle the process themselves and make the correct decisions themselves, then discovered that the process was a tad more complicated than first believed.

“If there was someone who came to me and said ‘I can do this and this for you, and this is what it will cost you” and I thought it was reasonable, I probably would elect to have someone provide me the help that I probably need,’’ one investor admitted.