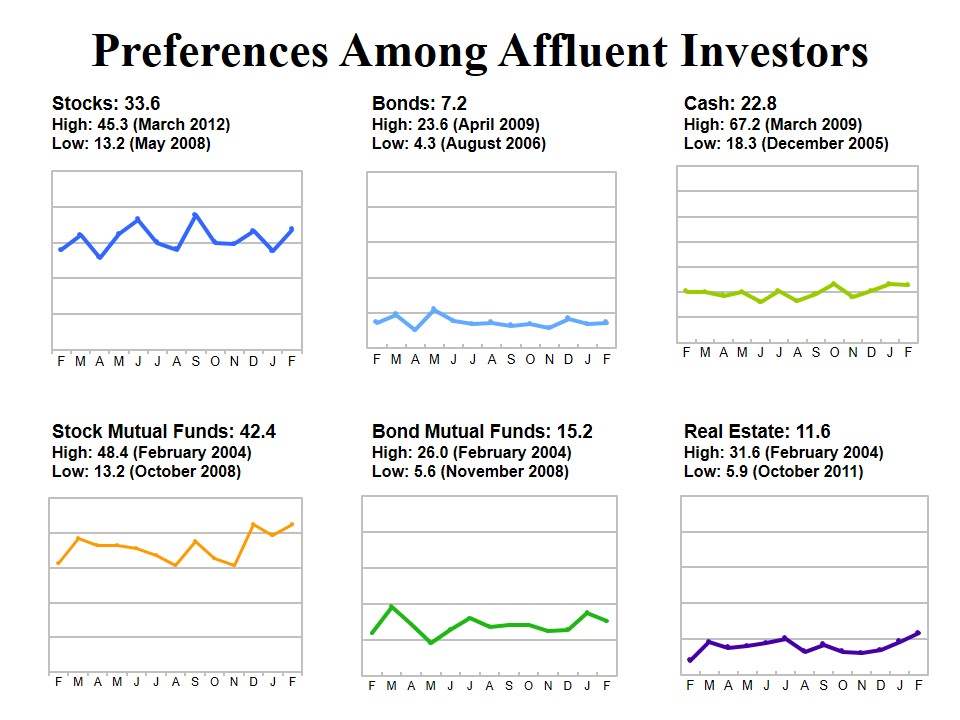 Is there a thaw in Affluent investors’ recent chill toward equities? When asked how they intend to invest in the coming month, respondents indicated they would be moving off the sidelines and investing primarily in Stock Mutual Funds and Stocks. Stock Mutual Funds gained 3.2 points to 42.40, while Stocks gained 6 points to 33.60, a five-month high.

Meanwhile, after holding at 30.80 points for two consecutive months, there was a slight decline in Affluent investors who said that they would continue to hold on the sidelines. This category posted a reading of 29.20, a 35-month low. There was also a slight retreat from Cash investments, which ticked downward 0.4 of a point to 22.80. But while intention to invest in Bond Mutual Funds dipped 2.40 points to 15.20, Real Estate gained 2.40 points to 11.60, a 20-month high. Bonds edged upward 0.4 of a point to 7.20.

“There was a decline the Spectrem indices from December to January, and Affluent investors were somewhat wary of the market,” said George Walper, Jr., president of Spectrem Group. “We see more participation in February with investors indicating an investment preference for equities. But there is still caution as reflected that there was little change in in the numbers for those investing in Cash or opting to stay on the sidelines.

But while less engaged in the market than Millionaires, more non-Millionaires this month indicated they would be investing in equities in higher numbers. Stock Mutual Funds gained 5.6 points to 38.5, while Stocks gained 6.3 points to 32.1, a five-month high.

Among Millionaire investors, there was a dip in those who indicated they would be investing in Stock Mutual Funds in the coming month—0.6 of a point to 45.4. But Stocks gained 5.4 points to 34.8.

And while Millionaires indicated an increased preference for more conservative Cash investments this coming month (27 points, a four-month high), non-Millionaires backed away, with Cash dropping 6.8 points to 17.4.

Part of Millionaires’ wariness this month may be attributed to international news, ranging from the Greek bailout crisis to terrorist shootings and the extremist group ISIS’ continued onslaught.