It looks as if you can buy happiness, after all.

At least, in limited amounts, and up to a point.

That seems to be the conclusion based on a recent survey by the Pew Research Center, part of the Pew Charitable Trust.

Pew notes that Israel, the U.S., Germany and the U.K. have the happiest populations among advanced economies.  This can be seen in the chart below: 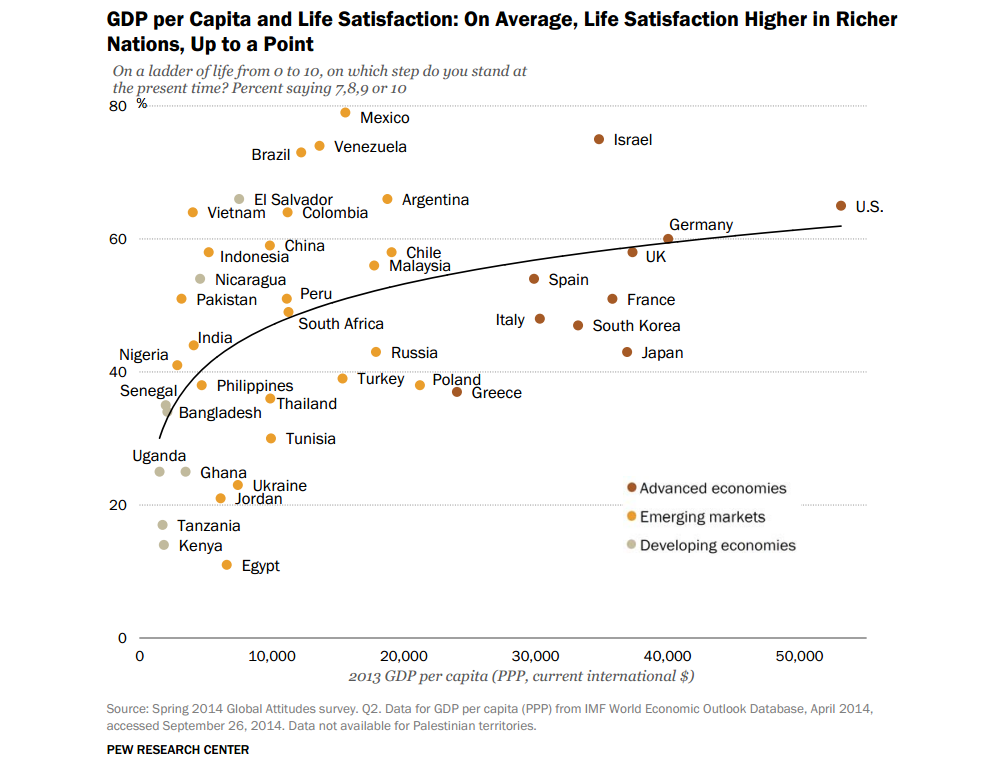 It should come as no surprise that in the emerging-market countries, rising income tends to be associated with substantial increases in life satisfaction. Some of the biggest gains in self-perceived life satisfaction occurred in Indonesia, China, Pakistan, Malaysia and perhaps most surprisingly, Russia.

Overall, the correlation between increasing income and happiness isn't especially surprising to psychologists and economists who study the field. Past studies have confirmed that money helps to meet the basic needs of life, and that correlates with higher life satisfaction. As different societies become increasingly wealthy, patterns of life satisfaction develop. The report notes that “Satisfaction with their material well-being, though, has the biggest positive impact on their overall happiness.”

Good health, being safe from crime, Internet access and economic opportunity all result in increased levels of happiness and satisfaction. The report, titled “People in Emerging Markets Catch Up to Advanced Economies in Life Satisfaction,” is worth perusing. It is based on 47,643 telephone and face-to-face interviews in 43 countries (See methodology here).

On average, the report found, “those people in advanced and emerging economies are considerably happier with their life situation than those in developing economies.”

Perhaps the most interesting part of the study comes from the regional differences.

Here are the key bullet points

There is an extensive body of research looking at the impact of money on happiness; one of the takeaways has been that, up to a point, more money does improve happiness and satisfaction. However, most of the gain in satisfaction is attributable to a rather modest increase in income.

Other research suggests buying experiences over material goods is the better way to use money to obtain happiness. Other studies have found that giving away money, in the form of gifts and charitable donations, raises one’s happiness levels. See the 2008 study by Elizabeth W. Dunn, "Spending Money on Others Promotes Happiness."

Perhaps most surprisingly, many of the wealthiest Americans worry "constantly" about their financial situation, a recent report by the wealth-management researcher Spectrem Group found. In discussing the report, the Fiscal Times noted “They may travel more, go to ballgames or concerts, or buy nice jewelry, but 70 percent of those surveyed said they get more satisfaction out of saving and investing their money than from spending it.”

The bottom line remains: Money can buy basic needs and security and this is why we are seeing an increased level of happiness in many emerging markets. Meanwhile, the developing nations also are still having trouble providing the basic necessities for their populations, and that is reflected in their life satisfaction measures.

But money also allows the purchase of experiences, which in the long run people prize more than material possessions -- just as they do by giving money away.

It's your cash. Choose what you do with it wisely.