President's Blog - Advisor or Client: Who Is Making the Decisions?

There are really only two kinds of investor-advisor relationships.
There are those relationships in which the investor tells the advisor what he or she wants to invest in, and there are those relationships in which the advisor tells the investors what he or she should invest in. Certainly, there are degrees to those two types of encounters, but it all boils down to who is making the decisions.
What’s interesting about those fundamentally separate relationships is how they are represented when there is an examination of the portfolios of investors based on their advisor dependency.
Spectrem’s annual analysis of the portfolios of affluent investors segments investors by their level of advisor dependency. Our research shows that investors who do their own investing have markedly different asset allocations than do investors who allow their advisor to make the investment decisions for their portfolio.
The study – Asset Allocations, Portfolios and Perceptions of Providers – segments investors as follows:
The report makes clear the specific differences between portfolios based on advisor dependency, notably that among Millionaire investors with a net worth between $1 million and $5 million, Advisor-Dependent investors report 68 percent of their total assets as investable assets, while Self-Directed and Event-Driven investors average only 56 percent of investable assets out of their total asset list. 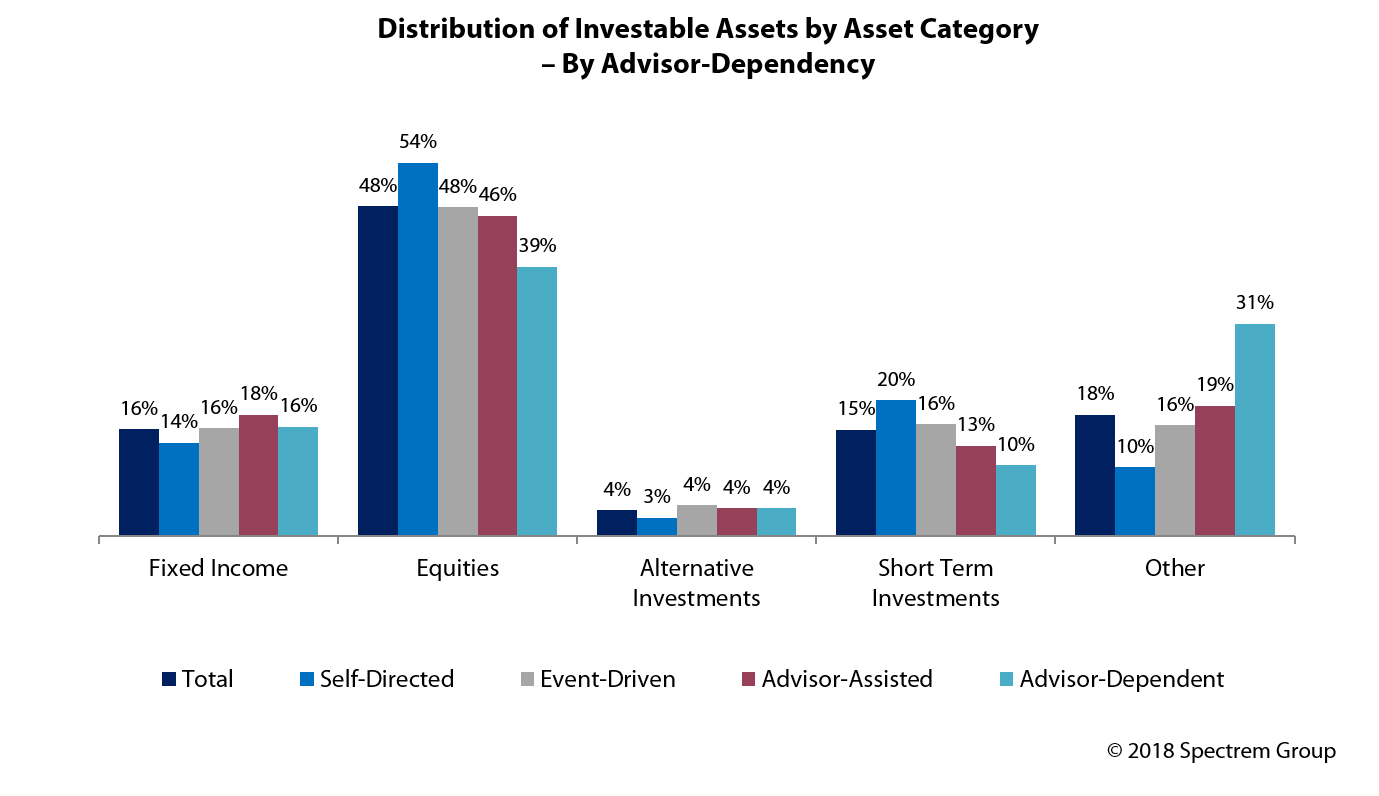 Looking at the asset categories invested in, Advisor-Dependent investors tend to be more diversified, with 39 percent of investable assets in equities and 31 percent in fixed income products, on average. By comparison, Self-Directed investors on average have 54 percent of their investable assets assigned to equities and only 10 percent in fixed income.   There is also a marked difference in the short-term investments, with 20 percent of the Self-Directed investor’s investable assets going that way while only 10 percent of an Advisor-Dependent assets put into short-term investments.
This research indicates that when advisors are in control of a portfolio, they tend to diversify the investable assets more than when investors are in charge. But that does not answer the historically arguable question “Are investors who depend on their advisor more likely to be financially successful than those investors who make their own investment decisions?”
Do the more independent investors, who save money in advisor fees and commissions by doing it themselves, lose money in the end because advisors are better at investing than investors are?
The research states the facts: Advisor-Dependent investors have a greater percentage of their total assets as investable assets, and have a more balanced investment strategy between equities and fixed income products than do investors who are less advisor reliant.
The research does not answer the question as to which is the more financially successful approach to investing.
Otherwise, what would investors and advisors argue about?