President's Blog - Who Do Investors Actually Listen To?

Thanks to social media sites like Instagram and Snapchat, which allow users to create an audience through photos and videos, there is now a field of young people in the public relations field known as “influencers.”
These influencers use their social media feeds to create a six-or-seven digit audience, then convince advertisers to sponsor their social media feeds by agreeing to appear with products in their photos and videos. These influencers are getting paid to do what every other teenager and young adult is doing for free, which is placing their photos and videos on websites for all to see.
The effectiveness of these influencers is uncertain, but for advertisers, it is about getting their brand out into public view, and social media is where much of the viewing is being done these days.
There are influencers in the field of financial advice as well. Television stations use "experts" to discuss current events in financial, economic and investment matters, and websites present videos of "experts" discussing similar topics. Any investor who wants to read, listen or watch someone claiming knowledge about money matters can find one easily. It is up to the investor to determine which of these "influencers" is offering quality advice.
Advisors need to know which of these influencers investors are listening to. They are actually competitors of a sort, since they offer advice to listeners and viewers for free, where advisors charge clients to discuss topics of investment and financial matters. Like anybody in a competitive field, advisors need to know who they are competing against. 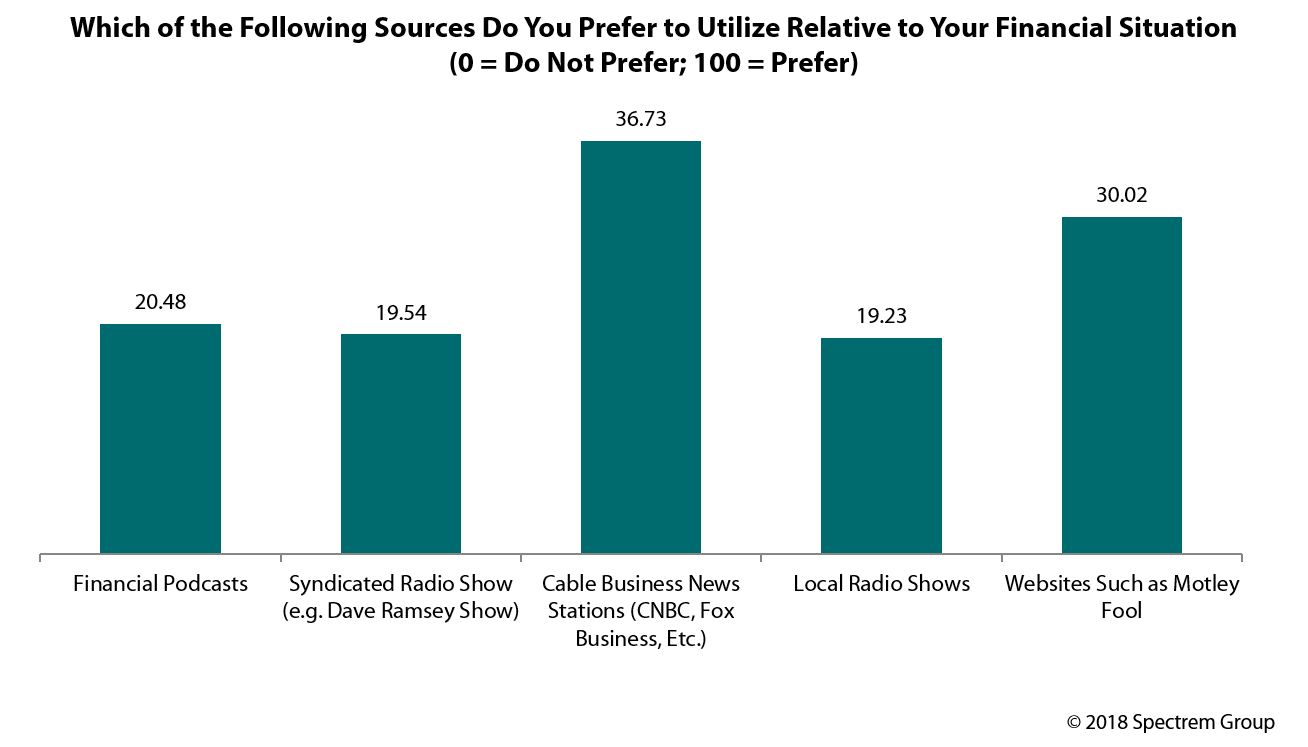 But Spectrem research shows that these media stars are not as effective or as encompassing as they might lead you to believe. In our upcoming study Communicating with Providers and Advisors, investors were asked to place their preference for certain media sources based on how often they utilize them.
Leading the field was shows on cable business news stations like CNBC or Fox Business. But among all investors, the rating on a 0-to-100 scale was at 36.73, which indicates even the most popular choice is not that pervasive.
One of the highest ratings for cable business shows came from investors who claim to be knowledgeable about investment products, with a rating of 45.15. But that is still below the midpoint.
Other such "experts" include websites such as Motley Fool and others (30.02 overall), financial podcasts (20.48) and syndicated radio shows, like the one Dave Ramsey offers (19.54). There may be investors who are influenced by these people, but investors seem more likely to listen to someone else they have a more personal relationship with, like their parents, friends or financial advisor.
It is incumbent upon financial advisors to determine whether these influences actually impact investing, or are just employed by investors as a starter kit, providing a new topic to bring up in conversations with their advisors. People in the media need new blood for topics to keep their shows fresh, and are not afraid to throw out original subject matter that may or may not actually be valuable to your clients.
If there are outside influences which you believe in, and you can promote the idea of investors educating themselves before they place the call to your office, investors might appreciate working with someone who is not afraid to work within the framework of modern communication and media forms. At the same time, arguing against the advice which comes from a particular public figure might offend an investor who has come to depend on the information they receive from an easy-to-access source.
For advisors, it is probably not as important to be the first source for investor information as it is to have the final say.
© 2018 Spectrem Group