Blog - When The President Tweets, Who Listens?

President Donald J. Trump is the first President to use Twitter as a primary communication tool with voters.  Most mornings, although not all, the President will lob out a few tweets, thus guiding the news cycle for the day.  While in some cases the tweets are praises regarding veterans activities, various patriotic gatherings, or even book promotions, many of the tweets contain the President’s opinions regarding controversial topics.  Based on the amount of media coverage generated by the President’s tweets, it would seem that every citizen is breathlessly awaiting the President’s next tweet….regardless of whether they consider themselves to be friend or foe. 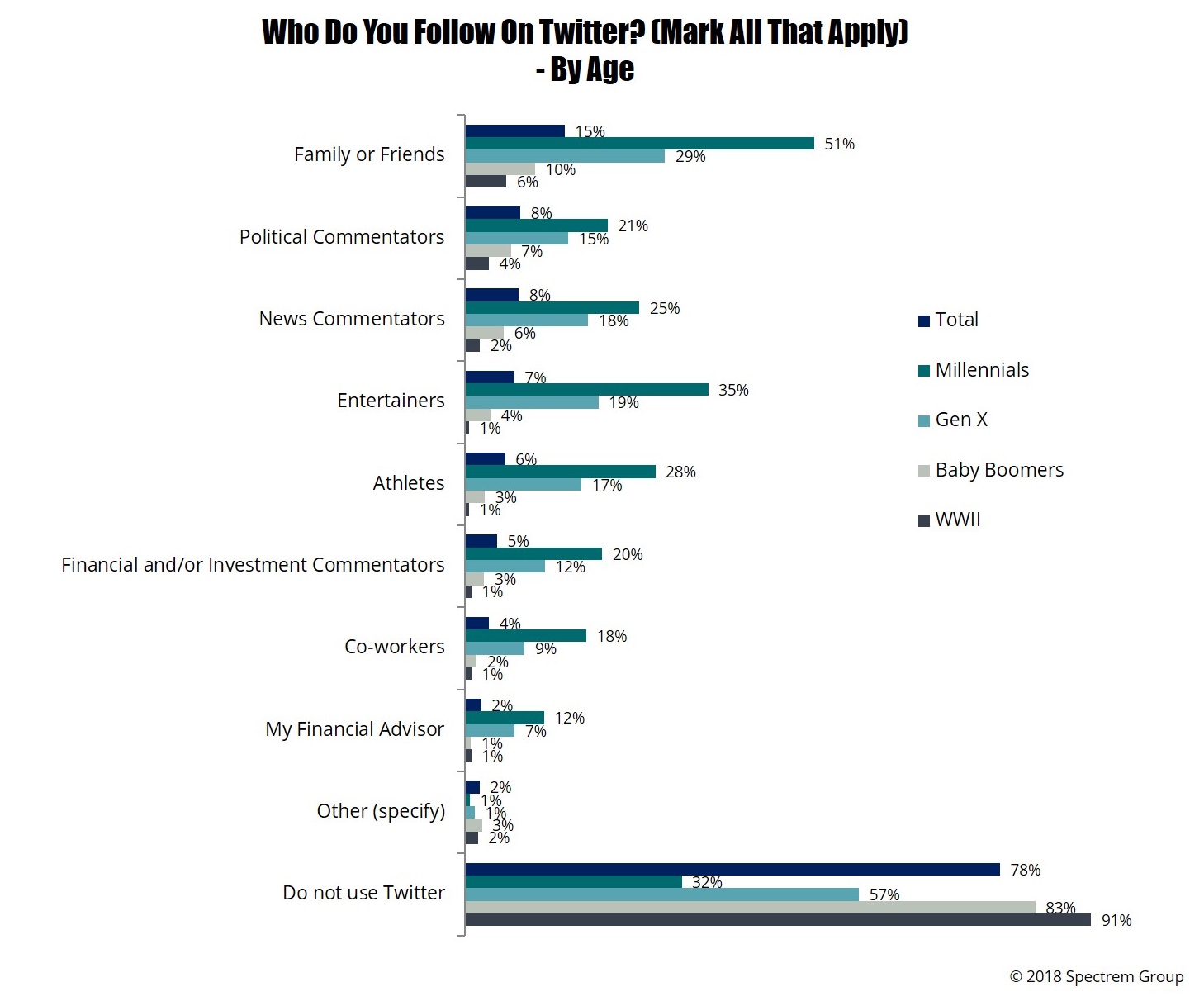 And whom do they follow on Twitter?  Well, unfortunately Spectrem did not specifically ask investors if they followed President Trump on Twitter.  (We will be sure to ask that specific question in future research!)  The most popular answer was Family or Friends at 15% of all investors and 51% of young investors.  Other categories ranged from Entertainers (7% total and 35% young investors), Political Commentators (8% total and 21% young) and News Commentators (8% total and 25% young).  Arguably, President Trump could fall into many of those categories.
But what about financial advisors?  Only 2% of investors currently follow their financial advisor on Twitter, although 12% of younger investors do so.  This could be a chicken or the egg scenario in some cases.  Few financial advisors actually tweet…..for many reasons…some compliance oriented.  If advisors tweeted more, would there be more investors who follow their advisor on Twitter?
It is important to note that Spectrem’s recent research The Wealthiest Americans: $25 Million Plus Investors indicates that more than half of $25 million plus investors would like to follow their advisor on Twitter.  Generally trends that begin with the young and wealthy eventually move downstream.  Thus, financial advisors may need to reassess their usage of Twitter in the future.
So when the President tweets, who listens?  Well, President Trump currently has 56.1 million followers.  So, arguably, all of those individuals are listening.  Add on to that all of the people who learn about his tweets on the daily news….and pretty much everyone ends up listening whether they want to or not.  Many of his actual Twitter followers could be young and/or wealthy people based upon Spectrem’s research.
Should financial advisors tweet?  Only if they want to appeal to younger prospects or wealthy households.
I am neither young nor wealthy but I do profess to being a Twitter addict.  One of the interesting findings in Spectrem’s research is that although Twitter currently continues to have low usage, those who do use Twitter check it multiple times daily.  If I had a financial advisor, I would certainly follow him or her on Twitter and it would be useful to hear some words of wisdom during volatile market cycles.
As for the President?  I do admit to following the President on Twitter.  Every morning I receive alerts about what he has tweeted.  Many times I chuckle, sometimes I find his tweets interesting, and often I find them quite disturbing or even embarrassing.  But no matter what….I then know what will be covered in the daily news cycle….because I know they (the news media) are definitely listening.