President's Blog - When Investors Believe, Should Advisors Stop Them?

Enthusiasm, in general, is a good trait to have. Enthusiasm can lead to action and activity, and it can be infectious. It’s certainly better than pessimism and lethargy.
The stock market thrives on enthusiasm. The stock market is a speculative mechanism, and speculation in the stock market comes from the belief that certain economic factors will act in a certain way, even though nothing is actually “certain”. Surprises, both positive and negative, affect the stock market, and by definition, no one knows when a surprise is going to come.
Enthusiasm for the stock market has been high for most of Donald Trump’s presidency. There have been fluctuations thanks to discussions regarding trade moves, new tax laws, the new budget, and other government activities. But the stock market has been on a steady climb since the country pulled out of the Great Recession.
What role do advisors play in the enthusiasm of client investors? Should advisors be the one holding the reins, pulling back when they think an investor is operating on a fateful belief in the bull market?
This question arises out of Spectrem’s new study on investors and their attitudes towards both politics and taxes. In Politics, Taxes and Investors’ Changing Attitudes, investors were asked to speculate on where the Dow Jones Industrial Average will sit on Dec. 31, 2018. Given a range of choices, the investors were being asked to state whether they are optimistic about the bull market, pessimistic about the bull market, or (perhaps wisely) uncertain what will happen going forward. 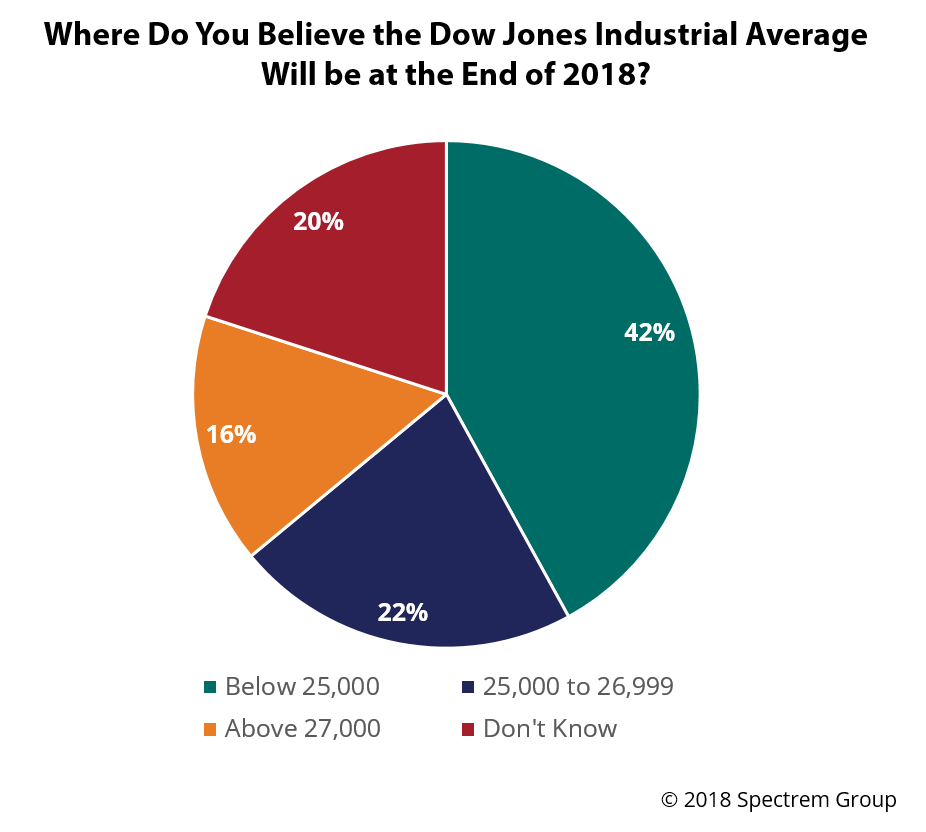 Twenty percent of investors fit into that last group, admitting they “do not know’’ where the Dow Jones will end up at the end of the calendar year. But that indicates that 80 percent were willing to hazard a guess, and 64 percent placed the index at 25,000 or higher. (The DJIA was at 24,719 at the end of business Jan. 2, 2018).
Such optimism is a good turn for investors and the advisors who work with them. It sparks conversation, increases speculation, and the market often feeds upon itself the way a gyroscope builds off of the effects of gravity.
But is there a point where optimism is simply too strong? In the Spectrem study, 26 percent said they expect to see the Dow Jones reach 28,000 or higher. That’s more than one-fourth of all investors who see records continue to be broken throughout the second year of Trump’s presidency. Should advisors worry that investors are riding the bull straight into a wall?
There are investors who watch the stock market like hawks and communicate with their advisor daily (or multiple times daily) to make decisions based on the movements of the sometimes quirky and volatile index. Advisors must interpret the stock market and know how to deliver a message to investors about how to react to the changes which occur, as well as how to react when the market grows stagnant.
By Friday, March 23, the market lost more than 1,000 points and 4.66 percent of its value as President Trump announced new rules regarding trade with China. By the following Monday and Tuesday must of that value had been restored. But how much time was spent over the weekend as investors spoke to advisors about how to react to the Friday news?
Is the market more volatile today than it was 20 years ago, before social media and cable news became so influential? Is the job of financial advisor more exhausting today than it was in 2000?
The Dow Jones, the NASDAQ and other financial indices are to the nation’s investors what the weather forecast is to farmers and traveling businesspeople. It’s something to watch, something to talk about, and certainly something to speculate about.
But speculation operates on predicted reality, and in today’s world, can anyone predict what the next reality is going to be?