Blog - When E-mail's Not Enough

It was an emergency. Not a life-threatening situation, or one that would cause anyone any real damage, but I had to get a message to a colleague and I had to know that message was immediately received.

I was in fact in the middle of an e-mail conversation with this person, but when something happened that required immediate contact and confirmation, I went with my first instinct and picked up the phone. I had to know, and I had to know immediately, and a telephone call seemed the best way to know that communication had taken place.

Communicating with advisors is rarely a matter of emergency, but it can be for active traders looking to take advantage of a sudden change in market price or jump on some hot industry news report.

All of this came to mind as I looked over our new research revolving around how investors communicate with their advisors. Communication has changed so much since the invention of the cellphone, which came after the planet-shuddering invention of the internet, which led to social media. There are now half a dozen ways to get a message to friends, family or business colleagues, and it is never clear which is the best method to ensure that your message gets received. 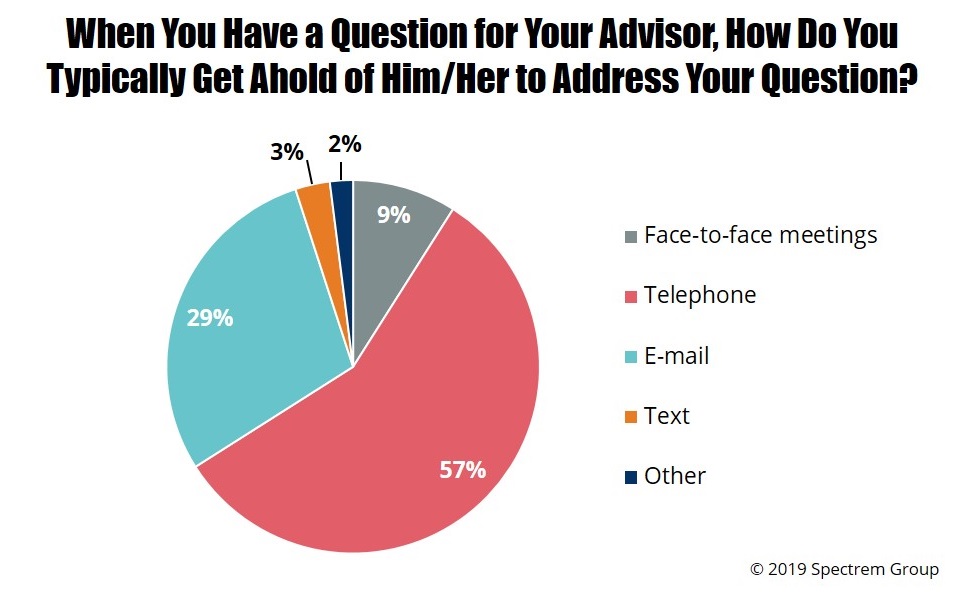 Investors today can communicate with their advisor in a variety of manners. Telephone calls still happen from time to time, but people are more likely to use e-mail in non-emergency situations. Cell phones now make it possible to text advisors, when advisors and federal regulations allow it.

A Spectrem study shows investor preferences for all of those communication modes. Apparently, investors use different modes for different needs or circumstances. There are some people today who claim to never pick up a phone or dial a number on their smartphone, and there are investors who have never texted, so advisors need to be responsive to all the different modes of communication their clients might use.

However, investors were asked “When you have a question for your advisor, how do you typically get ahold of him or her to address your question?” The survey question does not imply an emergency situation, but it does suggest that the investor is looking for an answer now as opposed to their next scheduled face-to-face meeting with their advisor, or waiting until the advisor makes their occasional check-up call.

Allowed to answer only once, 57 percent said they telephone their advisor in that situation. That proves that when someone wants to get an answer to a question, and wants to know their question has been received, the telephone is still the most likely manner in which they attempt communication.

The other two answers with a sizable response were e-mail (29 percent) and face-to-face meetings (9 percent), which would still probably require some form of contact to set up the meeting.

Only 3 percent said their first reaction would be to send a text.

As much as modern people like to decry or avoid telephone conversations (thanks perhaps to the endless robo-calls we get at home), when push comes to shove, most people are likely to pick up a phone.

Especially, as I discovered, when the need for confirmed contact is immediate.