President's Blog - When a Woman Loses Her Husband

Fifty percent of all marriages in America end in divorce, and…

One hundred percent of all people die. 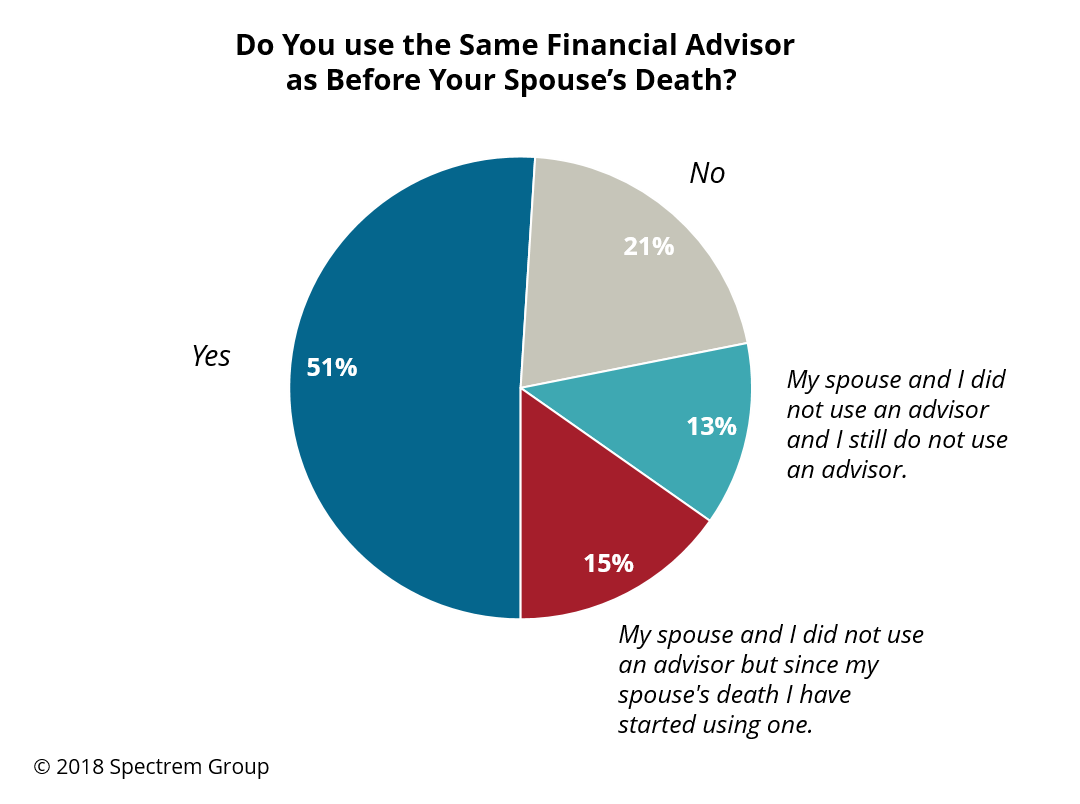 It is incumbent upon advisors to keep in mind those statistics mentioned at the beginning of this blog: that married women are very likely to one day be unmarried women, one way or another. Maintaining a working relationship with the females in a household makes sense because, according to actuarial tables, married women are more likely to become widows than married men are likely to become widowers (women live longer). As unfortunate as the death of a male member of a household is, it does not need to mean the end of a working relationship with the female of the household.
And if 50 percent of households end in divorce, half of an advisor’s married clientele is likely someday to become two possible accounts. While it might seem unlikely that both members of a household going through divorce would end up with the same advisor, a new Spectrem study shows that it happens, usually when the advisor created positive returns for the couple when they were married.
In Spectrem’s new report Widows and Divorcees: Empowering Women in Transition, women who have lived through either the death of a spouse or the end of a marriage discuss their advisor usage habits and behaviors.
The study is really a two-part look at the lives of women who are unmarried after having been married. Generally, there are two types of widows and two types of divorces – those who worked with a financial advisor in marriage and those who did not. In each case, the newly single women have decisions to make, whether to maintain an advisor relationship after becoming single or begin an advisor relationship after becoming single.
For widows, the change in marital status is often unexpected. For younger widows, the sudden death of a spouse can leave a woman in severe financial straits. According to the Spectrem study, only 50 percent of widows state that their husband left them well-funded as a suddenly single woman. Clearly, this is consideration for married male investors as they create portfolios for future income.
A divorce can be messy and expensive. A divorcee could end up with many complicated financial decisions to make as her lifestyle gets rearranged, and a financial advisor can obviously help with those difficult decisions.
Many decades ago, before the increased participation of women in the workplace and in the executive suites of corporate America, financial advisors may have been able to ignore the female spouse in a married household. It was not the proper way to behave, but it was the way society treated women at the time.
Such behavior is no longer acceptable. Female members of a married household are just as engaged in the finances of the household as the male, and just as likely to be making major contributions to the household’s finances, possibly even the majority of the asset accumulation. Sexism in advisor services is no longer appropriate or accepted, which is good for everybody.
Advisors should realize that a married female client could someday be an unmarried female client, and will likely need a financial advisor, perhaps even more than they did when they were married. Most investors want their advisor to be a long-term partner in the household finances, and since women live longer than men, their advisor relationship has a greater chance of being a long-term relationship.
Our study explains how widows and divorcees use advisors upon the loss of their spouses, one way or another. Advisors should know what the end of a marriage means to a woman’s use of financial advisors.