President's Blog - What A Difference A Year Makes

One year ago, as 2017 started, we had no idea what lay ahead, and the uncertainty concerned us.
In the first week of 2018, we don’t know what is going to happen in the next 12 months, and we are generally OK with it.
Thanks to the anticipation that comes with the sweeping tax reform bill signed into law in late December, investors who are already riding a high horse thanks to the unprecedented rise of the stock market numbers in 2017 are expecting 2018 to maintain and perhaps enhance the economic bliss that exists among those people who are investing in corporations.
This optimism spurred the Spectrem Millionaire Investor Confidence Index to rise in December to 18, its highest rating in three months, while the Spectrem Affluent Investor Confidence Index rose five points to 12. In both cases, the index indicates investors are in a bullish mood. 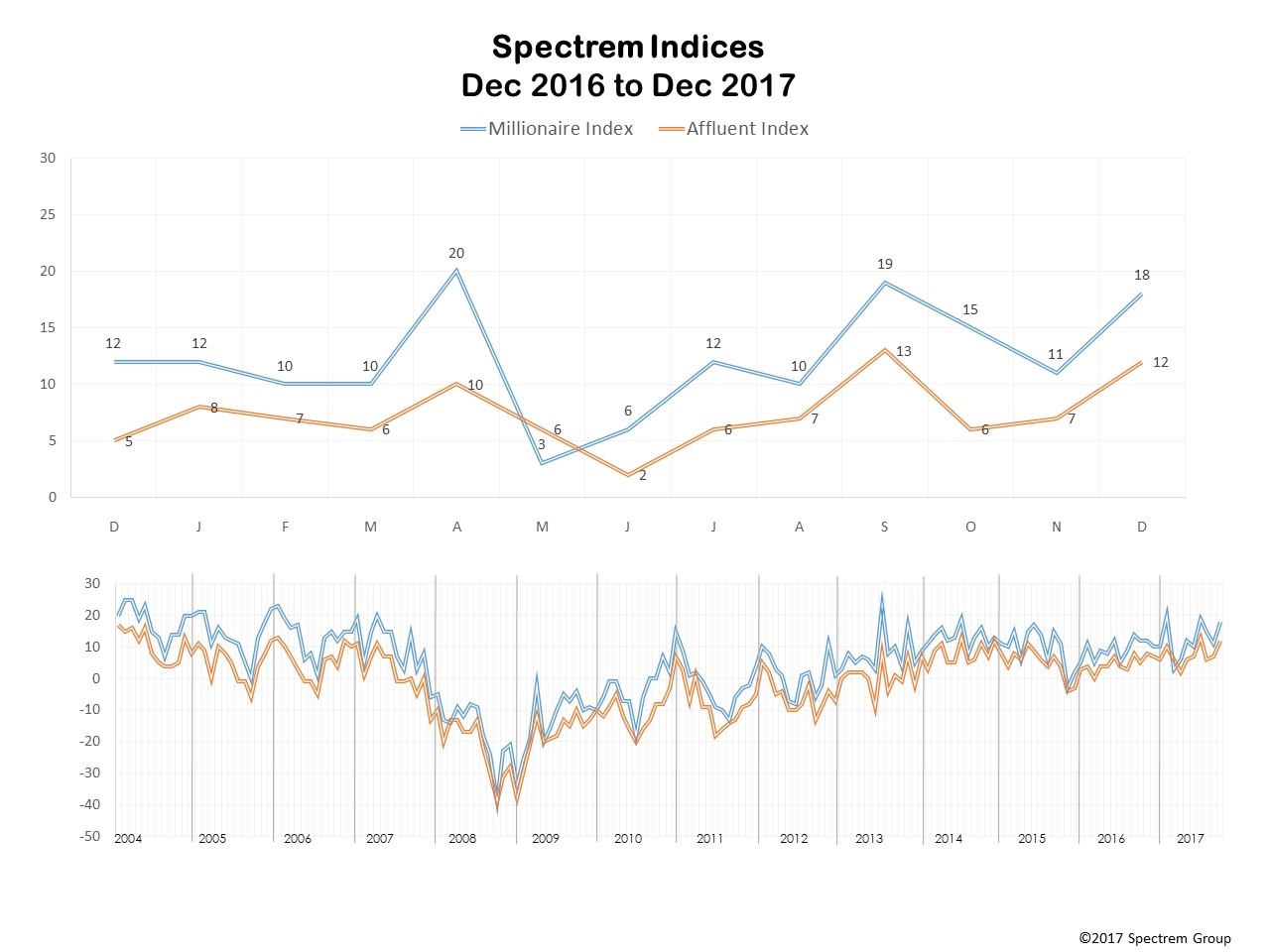 The index reported an increased interest in stock and stock mutual fund investing, which correlates to the continued success of the stock market overall. This increased interest in the market was true for both millionaires and those with less than $1 million in investable assets, which is an unusual circumstance for the Spectrem indices, which usually show a distinct difference between the two wealth segments in investment attitudes.
This unbounded optimism seems to be a direct result of the passage of the new tax laws. Even though much of the reward or cost of the new tax program won’t be determined until the laws are actually put into place, the market responded with huge jumps, and the gains continued into the first market day of the New Year.
What made the December indices so noteworthy is that in November, when the passage of the tax law was less certain, investors responded to the continued growth of the stock market with cautious pessimism. There seemed to be a thought that the stock market simply could not continue to climb as it had for the majority of 2017.
Turn the page into December, as the tax law passed, and suddenly those concerns drop away.
Is it possible that 2018 will see the kind of stock market rise which occurred in 2017? More importantly, it is possible that investors actually believe the stock market will continue to rise in 2018 as it did in 2017?
The stock market is a speculative measure, and operates solely on the level of optimism investors have regarding the American economy and the growth of corporate profits. The new tax law, with its severe cuts in corporate taxes, appears to have been built to encourage further investment in stocks and stock mutual funds. As far as stock market investors are concerned, the new tax laws are a hit, even before they get implemented.
How do advisors respond to this level of optimism?
It would be counter-productive as well as counter-intuitive to do battle with investors who see positive short-term gains resulting from the new tax laws. But, there do remain some knowledgeable people who believe the stock market is a bubble, and considering the current levels the stock market indices are at, when that bubble pops, it could produce a huge bang.
As the new year begins, advisors and investors are likely to have an increased amount of contact, which was also probably true in 2017. These are heady times, and investors want to take advantage of the opportunities presented to them.
Advisors need to consider being the grown up in the conversation, expressing the need to be wary of the possibility that there is a ceiling on stock market charts, even if no one currently sees that ceiling.
It’s like when parents let their kids go out to play, yelling out the impossible-to-comply-with instructions: Have fun, but be safe.