President's Blog - The Number of Millionaires Continues to Grow

Nearly every day of the work week, a new set of numbers get released from the federal government or from interested economic researchers to indicate the direction of the economy.

Every new indicator produces a slew of reporting from business journals and electronic financial media to explain why the new numbers matter, or why they don’t. It gets confusing to know which economic indicators indicate good news, which indicate bad news, and which don’t help at all in understanding what is going on with money in America.

For advisors and providers, this means there are more people in need of financial advice and assistance.

Here are the numbers, according to Spectrem’s Market Insights 2019:

Adding the Millionaires, UHNW and $25 million plus population, there are 11.8 million households in America with a net worth of $1 million or more.

Since the moment the United States began its recovery from the Great Recession, the number of wealthy households has grown. That’s a full decade of increasing numbers of affluent and wealthy investors, and that is good news for anyone in the financial advisory industry. 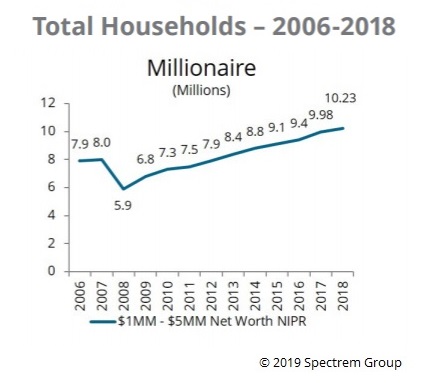 The global economy plays a role in the growth of wealth in America, and in 2018, the global economy was a mixed bag of successes and setbacks. A majority of investors today are invested in global markets, either in direct investment in foreign companies or by investing in foreign or international mutual funds. Attentive investors wake every morning before the American stock market bell to see what occurred in the Asian markets, knowing that there is a direct correlation between how the business world half a world away is reacting to international trade matters.

Market Insights 2019 includes details from the entire year of Spectrem research with affluent and wealthy investors, but the reduced growth among wealthy investors from 2018 brings about one key question:

“I wonder what growth will look like when the 2020 Market Insights report comes out?"