One of the most iconic movie quotes of all time comes from the 1967 film The Graduate, when a man pulls Dustin Hoffman’s Benjamin Braddock aside and offers him one word of advice:
“Plastics. There is a great future in plastics.”
In 1967, that was certainly true. It is probably still true. Plastic, which is most often created from petrochemicals, is one of the most widely-used manmade organic materials in the history of the world. Billions of dollars have been made from the production of plastics, and billions of dollars have been made from investments in plastics companies.
But plastics is an industry with a bad public relations image.
The world is inundated with plastic. The unfortunately famous Garbage Patch in the middle of the Pacific Ocean, where swirling tides have gathered thousands and thousands of pieces of trash into one miles-wide location, is filled with plastic in the form of bottles, boxes and wrapping.
Much plastic is recyclable, but participation in recycling among Americans is low. It’s nearly non-existent in third world countries, where people have little time to consider the proper disposal of plastic when they are concentrating on survival.
But the developed world has started to pay attention to plastic as an unnecessary evil. Starbucks announced Monday it will no longer serve plastic straws in their drinks as of 2020 (it takes two years to implement such a decision, apparently). The city of Malibu, Calif., just joined Seattle, Miami Beach and Fort Myers, Fla., banning the use of plastic straws in restaurants. Those establishments are encouraged to offer paper straws to their customers who require a straw to drink.
Homeowners, meanwhile, are being encouraged to purchase stainless steel straws for home use. They are washable and endlessly reusable, allowing parents who care about the environment to offer a feasible alternative to plastic straws to their children.
Which brings us to the new Spectrem study Investor Perceptions of Socially Responsible Investing. The study details the overall lack of participation and interest in socially responsible investing, and explains why investors do not have much interest in using their investable assets to impact the world.
Only 25 percent of investors believe socially responsible investments have the potential to result in a greater return on investment than other investment products. Only 8 percent of investors say their advisor has ever discussed socially responsible investing as an investment strategy.
But what if an investment can provide an acceptable rate of return and benefit society? What if you were to suggest to your clients that they invest in companies that manufacture paper straws?
It may sound silly, but paper straws are just an example of the kinds of products which could become lucrative investment possibilities thanks to a newfound interest in ecological forethought. The European Commission has proposed a ban on 10 different single-use plastic items that account for approximately 70 percent of the garbage that is found in European waterways. That includes straws, plates, coffee cups, and the worst offender of all, single-use plastic bottles.
Something is going to replace all of those plastic items as a common use product, and that something will be manufactured by companies who will likely benefit from the new interest in their product. Investing is a way for consumers to show their interest, and can benefit companies which are on the cutting edge of a new wave of products.
There are thousands of products being created to replace plastic items which offend ecologically-minded investors. According to the Spectrem study, 58 percent of investors who consider socially responsible investing do so in order to improve the environment, while almost 50 percent invest in socially responsible companies in order to send a message to companies who do not consider their social responsibility that they need to clean up their act. 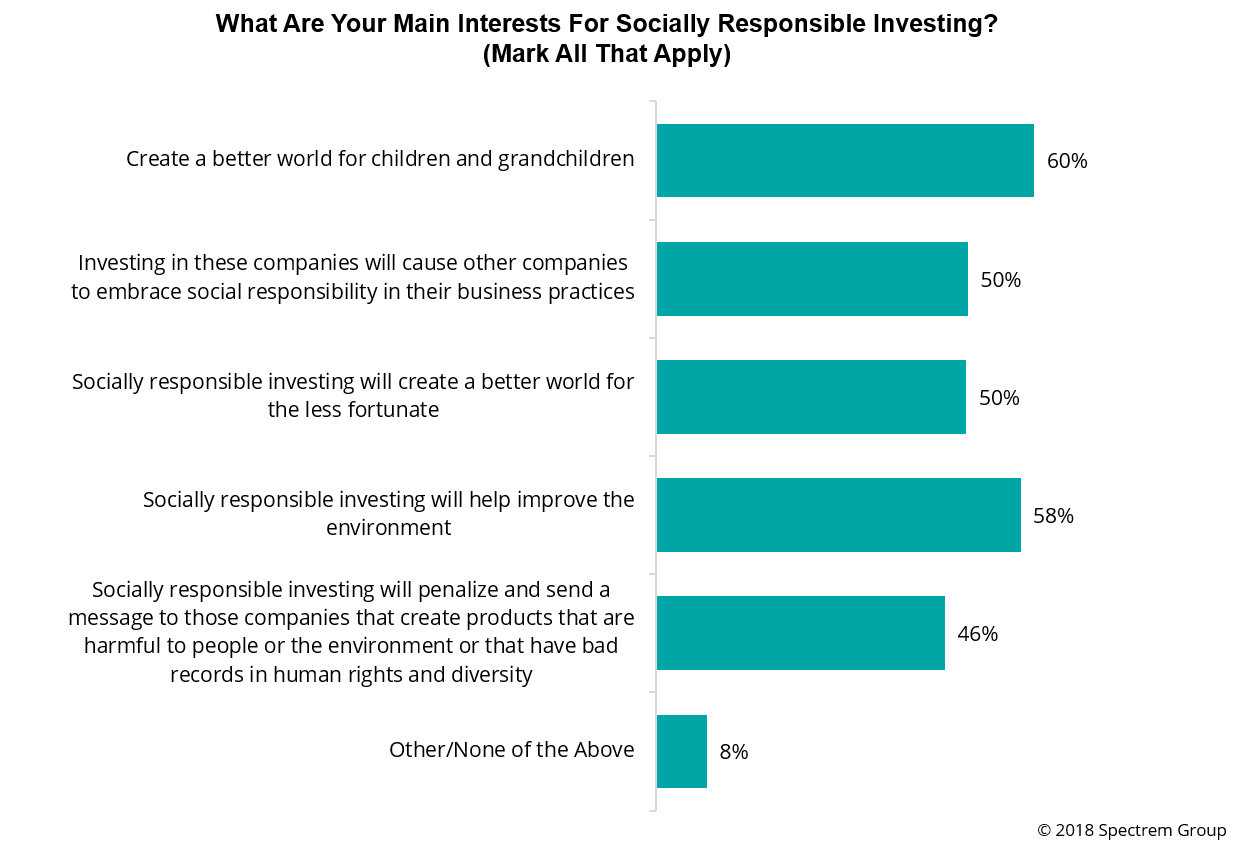 Paper straws could just be the beginning. If there is going to be some sort of anti-plastic revolution, there are numerous investment possibilities that could spark the social responsibility fire within investors.
© 2018 Spectrem Group