As the Dow and S&P reach historic highs, investors are becoming increasingly confident and somewhat lazy.  Their attitudes, compared to 10 years ago when their confidence levels were at record low levels, have changed dramatically and that influences how much they want to be involved with their investments as well as how much oversight and decision-making they want to hand-off to their financial advisors. 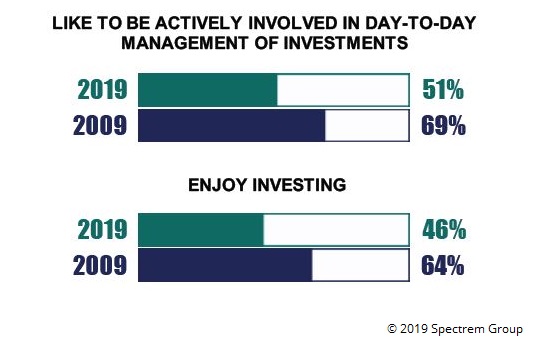 Based on Spectrem’s recent research report, Evolving Investor Attitudes and Behaviors, just over half (51 percent) of affluent households like to be actively involved in day-to-day management of their investments.  This compares to 69 percent of investors who wanted to be actively involved with their investments in 2009.  Based on the qualitative research that Spectrem did in 2009, investors were very angry with financial institutions.  They didn’t trust their advisors to make the right decisions and they wanted to see what was happening in the markets every day.  Today investors like to discuss specific opportunities they may see instead of being worried about their investments.
It’s interesting to note, however, that in 2009, 64 percent of investors enjoyed investing.  In contrast, only 46 percent of investors enjoy investing today.  This may be because they simply tired of being involved and now that they feel more confident, they find investing boring and tiresome.
Another large difference between 2019 and 2009 is the dependence that investors have on their financial advisors.  Spectrem asks investors their self-perceived reliance upon their advisor.  These perceptions include the following:
The number of investors who described themselves as Advisor-Dependent was 13 percent in 2009.  In 2019 the number of Advisor-Dependent investors has increased to 20 percent.
Why is this happening?  Perhaps because more than half of investors (52 percent) feel their financial situation today is better than a year ago and 54 percent believe things will be even better a year from now.
There is also good news for financial advisors.  When investors were asked to rank on a 0-to-100 scale the effectiveness of various factors in helping them to make profitable decisions, they ranked their primary financial advisor at 70.11.
The anger of 2009 has dissipated and investors are now ready to hand-off more of their investment decisions to advisors.  Make sure that you gain their trust so that when the market isn’t doing as well, their confidence will remain.
© 2019 Spectrem Group