A new calendar year is supposed to provide a sense of optimism for the changes that will come in the next few months which will improve one’s fortunes from the previous year.
But for investors, the calendar year 2019 opens with a sense of consternation and potential dread.
In 2018, the Dow Jones Industrial Average suffered its worst December since 2008, when the nation was just beginning to understand the depth of the effects of the Great Recession.
A 2018 New Year’s Eve rally of more than 200 points brought the DJIA to 23,327, which was still almost 2,500 points below the Dec. 3 open of 25,779. That’s a drop of almost 10 percent.
Are investors worried? Have you heard from them? What are you telling them?
There are investors who do not invest in individual stocks, so that the stock market numbers from December aren’t the end of the world. But a significant percentage of investors do pay close attention to the DJIA and the other stock indices, and do want to know how the trends in the stock market impact their investing decisions.
According to our new study Portfolio Decision Making, only 16 percent of wealthy investors ignore all stock market indices. Forty-one percent watch the Dow Jones Industrial Average the closest, 31 percent pay the most attention the S&P 500, and 11 percent keep a closer eye on the NASDAQ. But the point is that those numbers do mean a great deal to most investors, and they will turn to their advisor for an understanding of how those numbers reflect the prospects for the investor’s portfolio.
The drop in the stock market was not a complete surprise to most analysts. A correction was expected following the steady climb in the DJIA and other indices over the previous years since the Great Recession. Many observers felt a slight recession was on the way as the effects of the U.S. government tariff battles with China and others created a downturn in economic fortunes and a resulting downturn in the market numbers.
For advisors, there is a choice to be made. Do you tell investors to reduce their exposure to the stock market, or do you tell them to hold on because the late 2018 numbers are just a blip in the market, and President Donald Trump will make moves to cause the numbers to rise in 2019? Do you try to affect an investor’s attitude toward the stock market indices, or do you just make decisions based on an investor’s level of concern toward the stock market?
There is no scientific proof of this, but there does seem to be a balance in the world between optimists and pessimists. The world population seems to be equal parts positive and negative. It’s practically built into the sub-atomic nature of the planet. That balance plays a role in the way the stock market responds to economic pressures.
In July, Spectrem asked investors what they thought would happen to the DJIA over the next six months to the end of 2018. They were asked the question "Where do you believe the Dow Jones Industrial Average will be at the end of 2018?"
The survey was conducted between July 17-24, 2018. On July 17, the DJIA opened at 25,033. On July 24, the index closed at 25,241. At that time, the Dow Jones and other stock market indicators had stalled from the steady climb following the Great Recession in 2008. It then reached above 26,000 by early August before it began a slow drop through the remainder of 2018. 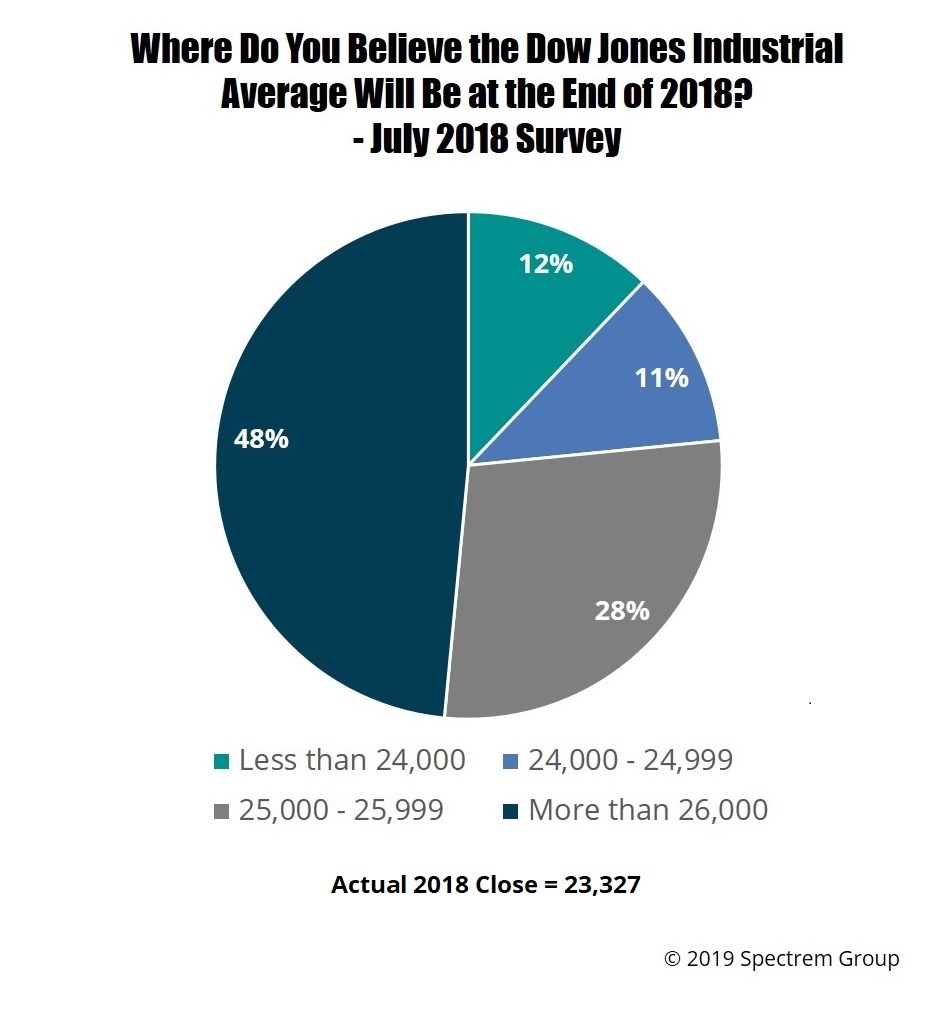 According to those investors who asked to make predictions in July, 12 percent said the DJIA would drop below 24,000 by the end of the year. In fact, 6 percent saw the Dow Jones fall below 22,000 by the end of the year, and on Dec. 26, the DJIA did in fact record a low of 21,712 before rebounding between Christmas and New Year’s Day.
There were more optimists than pessimists among those investors back in July. Answering the question at a time when the Dow Jones was ranging in the low 25,000s, 48 percent of investors said they thought the Dow Jones would rise above 26,000 by the end of the year. Almost one quarter expected the final number to be above 27,000.
Did those optimists bail out as the stock market fell? Or did they hold on to their position, or even build on their investments in the belief that those numbers would bounce?
More importantly, what did you tell those optimists about the stock market future? And how did you defend your opinion?

Investors want to know what is going on with the stock market, and they will turn to you for answers if they have not done so already. Be prepared.