I have always been a working mother.  I have always carried around some guilt about that choice and wondered whether or not it was right for my family and if I was ruining my children for life.  Now that my oldest has just received her formal offer letter from a prestigious law firm in NYC (bragging …just a little), the guilt is a little more manageable.

The reality was that I always worked for two reasons.  First, it allowed me to provide my children and family with some of the nice “extras” that my parents couldn’t afford.  We have taken nice family vacations, my children attended great schools and we are able to help our children with college expenses.  But the second reason for my guilt was that I enjoyed my career.  The intellectual stimulation and feelings of success and confidence when a project or report was well-received motivated me to get up extra early every day, work out and organize life so everyone was in the right place at the right time.

In Spectrem’s report, Successfully Growing Your Business with Wealthy Women, we tried to explore some of these themes.  We felt it was important for financial advisors to understand what motivates women to make specific life decisions.  To be honest, I was also curious to see how many women felt the same way that I did.

The research found that two-thirds of wealthy households (those with more than $1 million of net worth) were two-income households.  Now arguably, one could say that if a household had more than $1 million of net worth, the woman didn’t need to work….but that’s sort of a chicken or the egg kind of question.  In fact, we found that 59% of these women felt that they needed to work and that they actually Wanted to work.  Another 28% of women indicated that working full time wasn’t really necessary but they Loved to work.  Only 14% of working women were working because they felt they had to and would prefer not to work.  There was little difference between the attitudes of women with no children versus those that had 1 or more children. 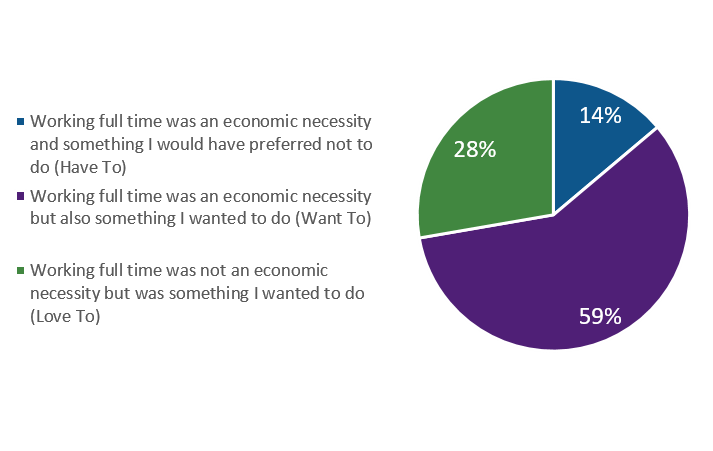 Another interesting finding in the research was that 89 percent of the women surveyed felt that they are better off financially than their parents but only 34 percent believe their children will have a better lifestyle than their own.  Is this because they feel the world is about to collapse or is it because they think that if their children can experience the same lifestyle as their own…then they will be doing pretty well?

I don’t know the answer to the last question, but I do know that I’m glad that I’m not the only working mother who actually Wants to be working.  Additionally, I now anticipate that despite my career, my children will hopefully live in a lifestyle similar (or better than) that in which they were raised.  Therefore, market research has helped me to overcome my own guilt…..for the most part.