I am not a big supporter of “social” investing.  Not because I am a bad person.  I support helping the poor.  I also support investing in technologies and other concepts that help preserve or clean-up the environment.  But I don’t approve of how politicians and celebrities jump onto the bandwagon to support various social causes and related investments simply to toot their own horn.
In recent years, public pension plans have jumped onboard to not just environmental investing but investing in various social causes that are politically motivated.  This may be because the governor or mayor of a state/city is trying to show how caring they are for prisoners or the homeless or whatever….and therefore they support that cause.  In Illinois, for example, the Mayor of Chicago has courted the teachers and their pensions……in a state that can’t pay to fund the pension…but his motive has primarily been to obtain votes….not look out for the state or city. 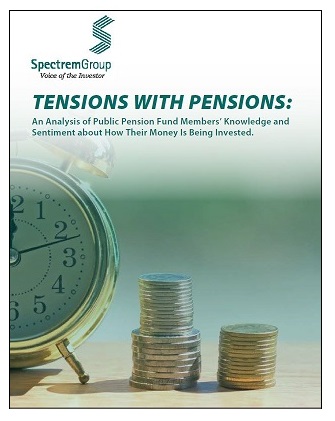 Recently we published a whitepaper based on some research we had conducted with public pension plan members, Tensions with Pensions. Spectrem surveyed pension members from CalPERS (California Public Employee’s Retirement System), the NYC pension funds (which includes members or 5 different funds), and a sample of members from other pension members nationwide.  We focused on CalPERS and the NYC funds because they are large and because they are known to have made investments in multiple social and/or political causes.  In this research we made some important findings.
About 50% of pension members indicate that they will be relying upon their pension income during retirement, therefore their level of concern is not surprising.  Similar to other research Spectrem has completed, investors support social causes and related investments…..as long as the return is equal to or greater than the return they might receive on other investments.
Arguably, in many cases, the amounts invested on social and/or political causes may be rounding errors based upon the size of the fund.  However, fund trustees and administrators need to be looking out for the best interests of their beneficiaries.  It might be hard to argue that all of these investments fall within that definition.
Pension managers need to avoid political investments.  In a climate in which political issues are hot topics, it would be easy for a group of pension members to claim any specific political and/or social investment was not in their best interests.  Alternatively, no one…..no Mayor of Governor or other politician ….should be able to benefit publicity-wise …in any of these investments.  Frankly, although I am unfortunately not a member of a public pension, I would be one of the first to bring a class action against the board of my pension if they made some political investments over which I disagreed.
Please read our new whitepaper.  We are always interested in your thoughts.