Blog - Mixed Messages From Investors - Bear Market Or Not?

Investors are generally happier with their financial situation today than a year ago ... and they feel it will be even better a year from now … yet almost a quarter are anticipating a serious market downturn.  So what’s up with investors and their attitudes towards the market?
In a new report to be released by Spectrem Group, Evolving Investor Attitudes and Behaviors 2019, Spectrem found that more than half (52%) of investors with $100,000 to $25 million of net worth indicated that they are better off financially today than they were a year ago.  In a similar note of optimism, 54% anticipate that they will be even better off a year from now than they are today.  But their feeling about the stock market aren’t quite as rosy.  As today’s Dow Jones Industrial Average hovers between 25,000 to 26,000, more than a third of investors predict that the market will finish 2019 below 25,000 and only 22% believe it will finish 2019 over 27,000.  The remainder predicts the Dow will end 2019 in about the same spot it is at today.  So why do investors predict they will be better off?
Do politics have an impact?  Not as much as one would expect.  While 60% of Republicans predict their financial situation will be better a year from now, 50% of Independents feel similarly and even 48% of Democrats also believe they will be better off a year from now.  Predictions about the stock market, however, are slightly more dramatic.  A third of Republicans believe the market will end they year over 27,000 and 23% of Independents feel similarly.  Only 13% of Democrats are that optimistic about the Dow in 2019.  But overall, regardless of party, the largest percentage of investors believe the Dow will end they year about where it is at today.ac
The level of wealth seems to have a slightly greater impact on attitudes regarding financial confidence in the upcoming year.  Wealthier households are more optimistic that their financial situation will be better a year from now compared to less wealthy households.  Attitudes about how the Dow will end 2019 are also slightly more optimistic. 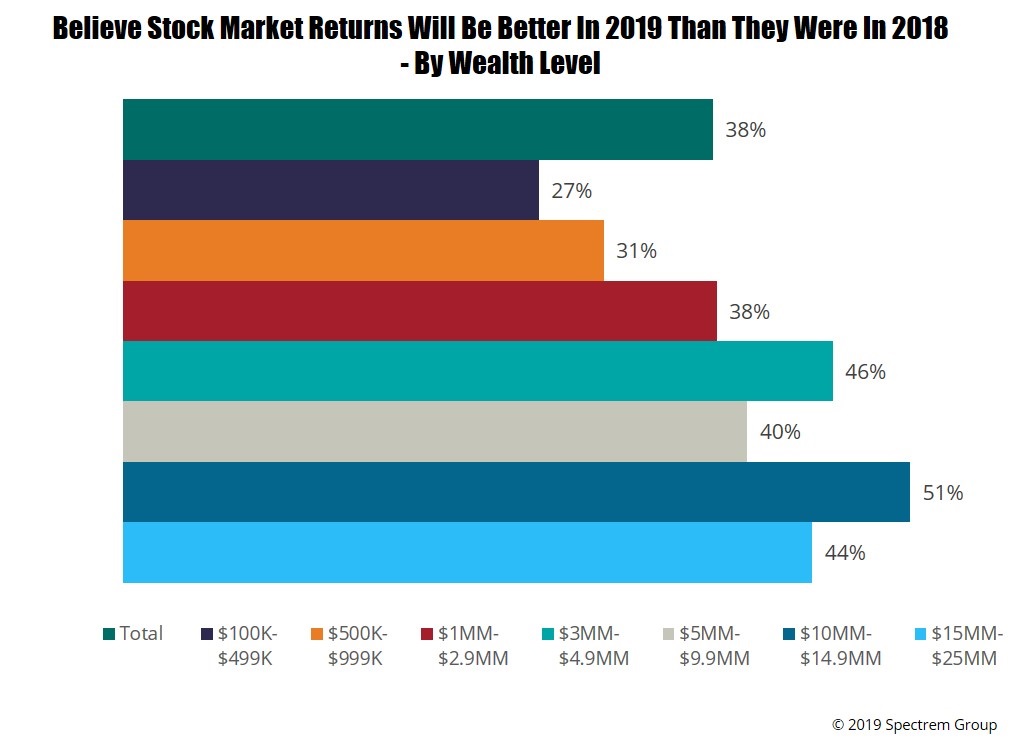 While the stock market has an important impact on a household’s overall wealth level, as wealth decreases, so does the percentage of investable assets held in one’s portfolio.  If a household’s wealth isn’t entirely dependent upon the investable assets, it’s easy to see how investors might not be quite as worried about a potential downturn in their overall wealth level.  Similarly, if one has a large percentage of investable assets, the total assets one may own overall is generally greater.  Thus these individuals may still perceive their financial results will be better, even if they are worried about the market dropping or remaining flat.
Overall, more than a third of investors (34%) believe the market will remain volatile for at least the next two years.  This, of course, corresponds with the remainder of President Trump’s current term.  Another 24% of investors believe the market will remain volatile longer than that and 22% predict the volatility will be over sooner.  A very wise 19% of investors indicate they just don’t know.
So investors are somewhat optimistic but still nervous about the markets.  These attitudes are the only things that have not changed dramatically in the past year.
© 2019 Spectrem Group