Times are good, and investors want to take advantage of all of the opportunities that exist to expand and improve portfolios. The stock market continues to rise and corporate earnings reports coming out in late October and early November are expected to be overwhelmingly positive.
The continued rise of economic fortunes is occurring despite little change in federal regulations or new legislation. The health care insurance plan is still in flux, and President Donald Trump’s tax plan is in disagreement with some of the wishes of the GOP-led Congress, creating uncertainty about its immediate future.
But uncertainty may be part of what is fueling the bull market. Unlike the eventuality that was the Brexit decision, there is no knowing how the political fortunes of America are going to turn out. There is no knowing what tax reform will actually look like. There is no knowing who will eventually be affected financially by a change in our health care insurance system.
And so, investors with the financial wherewithal to do so are staying in the market, continuing to ride the wave that so far seems to be unwavering.
But, as Spectrem’s October Confidence Index shows, Millionaires are also hedging their bets.
The Spectrem Millionaire Investor Confidence Index (SMICI) reflects the investment sentiments of households with more than $1 million in investable assets. According to the SMICI, Millionaire investors are showing growing interest in investing in Stocks and Stock Mutual Funds, the true mark of speculative investing.
But at the same time, the Millionaires are increasing their investing in Cash and Bond Mutual Funds, which is the safety bet among the SMICI markers. In fact, the intention to invest in Cash reached one of the highest levels in the history of the SMICI.
Rarely in the history of the SMICI have investors expressed an interest in extending their investments in equities at the same time as increasing their investment in the holding accounts like Cash and Bond Mutual Funds.
Millionaires are covering themselves in case today’s economic fortunes do not continue at their current rate. 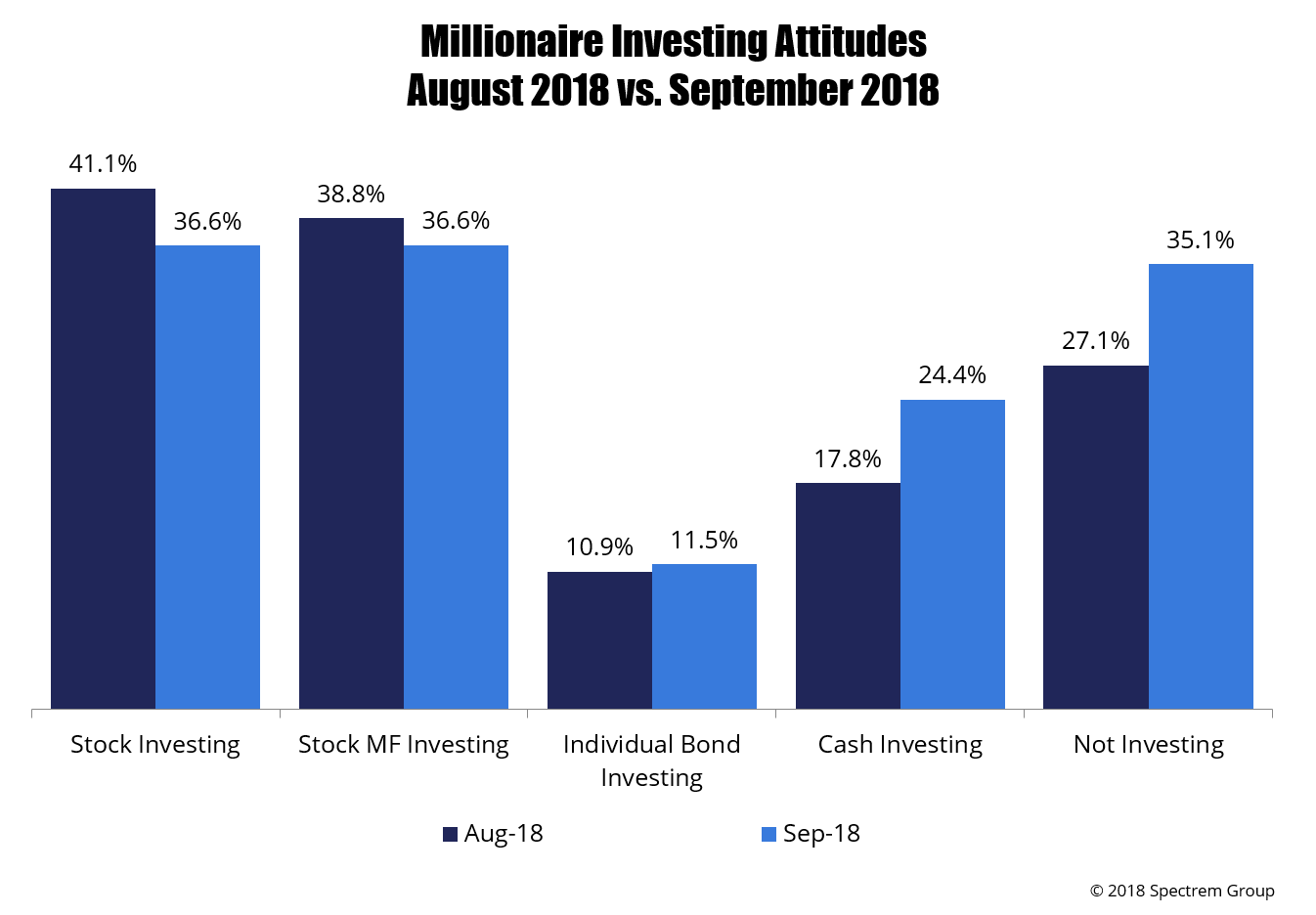 The Spectrem Affluent Investor Confidence Index (SAICI), which rates the investment sentiments of households with $500,000 in investable assets, saw a significant decrease overall, much lower interest in investing in Stocks and Stock Mutual Funds, and an increase in interest in Cash investing. The non-Millionaires don’t have the same level of investable assets and are less willing to bank on the continued success of the markets.
Whose thinking is correct?
Advisors know there is not correct answer to investment strategy, and the factors that create optimism in one investor can signal a pessimistic view from another investor.
Advisors must stay abreast of their client’s thinking whenever an economic news story breaks. Those Millionaires who are extending themselves in the belief that the current state of financial affairs is the standard by which we will operate going forward don’t necessarily need to be knocked down a peg, but they might be willing to listen to a suggestion that they cover their investment bets somehow.
In today’s topsy-turvy political climate, there is no telling what is going to happen with absolute certainty. It would be nice to know the bull market will remain in place for the foreseeable future, but the future is not foreseeable these days.
© 2018 Spectrem Group