Among investors, one question became the historical example of a missed opportunity: What if I had invested in IBM back in 1970?

International Business Machines was one of the first American companies involved in computer hardware and software, and has long been an example of forward-thinking investment strategies. It is the most frequent example of investor regret, which is evident whenever you hear someone say “If only…”

Is marijuana the next IBM?

When people say marijuana is a growth industry, they are not just being “punny”. Ten states already allow marijuana use for recreational purposes, and many others allow marijuana to be used medicinally, mainly as a pain curative. Several states are discussing legislation to determine if they want to join the growing field of states which approve the use of marijuana for one reason or the other. 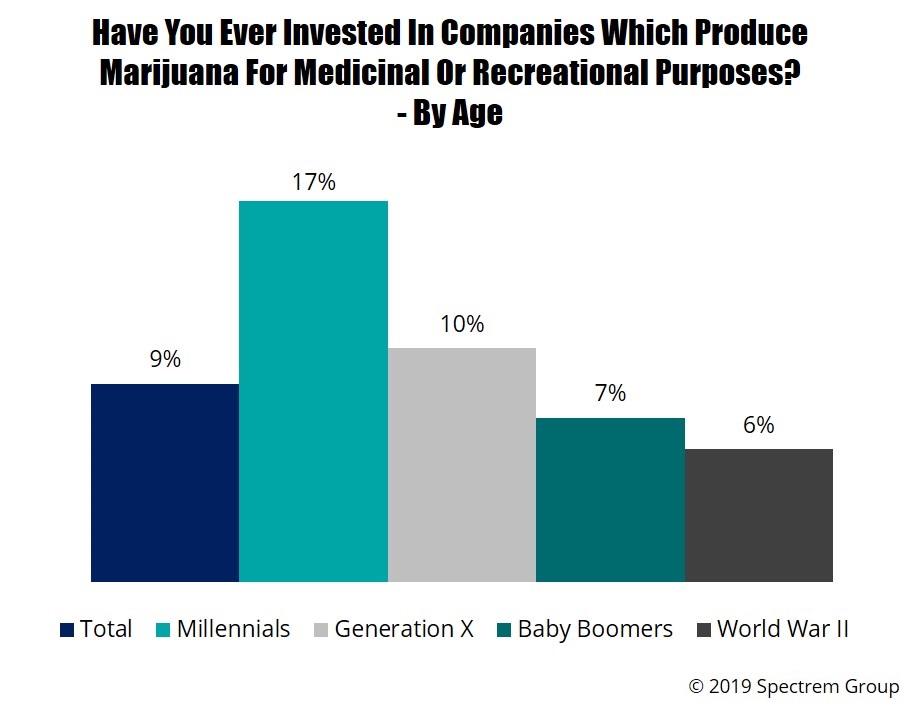 Meanwhile, researchers are expanding their search for ways in which marijuana can be used to cure what ails us, and the development of cannabidiol, known as CBD, a non-addictive compound found in marijuana, is a hot topic among both the medical and investment fields. Many companies in the U.S. are now involved in the growth of the marijuana industry, either as growers or marketers.

Simply put, investors can now invest in marijuana in ways beyond just being a consumer of marijuana.

In April, as part of Spectrem’s monthly research of wealthy investors, several questions were asked regarding marijuana as an investment option. Among more than 700 investors, 52 percent approved of the legalization of recreational marijuana. There was an obvious difference in response based on age, as 66 percent of Millennials agreed compared to just 37 percent of World War II investors. Also, 28 percent of investors are more in favor of the idea than they were five years ago, while only 7 percent have gone the other way and are now less in favor of legalizing marijuana.

Are advisors and investors missing the boat on this topic?

Only 9 percent of investors have invested in companies which produce marijuana either for medicinal or recreational purpose. Only 17 percent of Millennial investors had done so, which means the market for marijuana as an investment option has not yet been fully grasped by young investors for whom the idea might not be anathema.

Apparently, advisors are waiting for investors to bring up the subject. Only 6 percent of investors say the idea of investing in marijuana products and companies has been broached in conversations with advisors. It appears the financial advisor industry has not yet seen the light in terms of marijuana as a viable investable product.

This seems like an odd miss. Not only are more states allowing for its use, but the opportunities for further expansion of the industry are clear.

As mentioned above, researchers have determined that cannabidiol, colloquially known as CBD, is a chemical compound found in marijuana which is not psycho-active but does provide relief for pain, anxiety and inflammation. CBD is a very popular medicinal product and is also causing state and federal governments to consider its use in medical treatments.

Among the investors surveyed by Spectrem, 53 percent agreed they would be willing to invest in companies involved in the creation and marketing of CBD, which appears to be beneficial without being addictive or psychotropic. Such a product argues against those investors who worry about marijuana as an addictive product or as a gateway drug to other more dangerous psychotropic drugs.

Not to suggest that investing in marijuana will pay off the way an investment in IBM did in the 1970s and beyond, but investors might not mind having the conversation.