The last week of February was devastating for investors as the markets crashed due to the spread of the Novel Coronavirus (hereinafter “coronavirus”) globally as well as the additional concern that Bernie Sanders, a Democratic Socialist, could win the Democratic nomination for President. This rapid decline was surprising and came just a few days after Spectrem fielded research in which 66% of investors indicated that they were better off than a year ago.

CNBC reports that the market lost 12% last week. Using that as a guide, Spectrem decided to do some “back of the envelope” calculations to identify how much that meant in dollars based upon the average portfolio of a Millionaire. Based upon Spectrem’s report, Portfolio Trends, Expenditures and Perceptions of Providers, at the end of 2019, the average portfolio of a Millionaire (defined as households with $1 million - $5 million of net worth not including the value of their primary residence) consisted of the following: 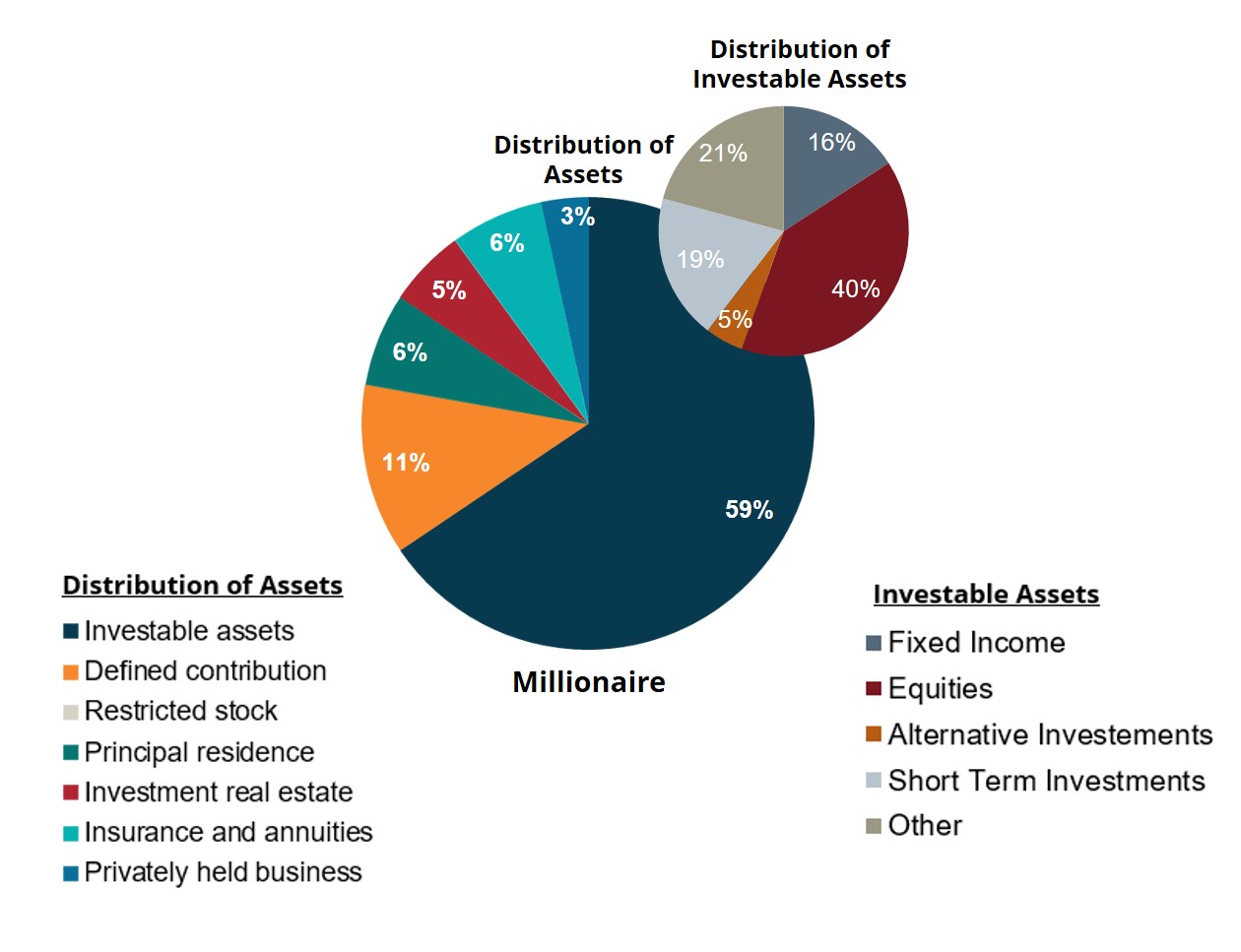 The total assets of a Millionaire’s portfolio include the value of their defined contribution plan, their principal residence, other real estate, insurance, privately-held businesses and their investable assets. (Note-Spectrem does not include the value of the primary residence when determining net worth for purposes of our survey, but the primary residence is still considered an asset.) As you can see, the investable assets represent the largest portion of their total assets, which at year end was 59 percent of total assets. Now, let’s look carefully at what is included in their investable assets. An average Millionaire holds about 17 percent of their investable assets in fixed income, 8 percent in alternative investments, 16 percent in cash and short-term products and 16 percent in other investments. The largest portion (42 percent) overall is currently invested in equities.

The average value of U.S. stock portfolios held by Millionaires at year-end was $246,000 and the average value of U.S. stock mutual fund holdings was $256,000. The average value of ETFs was $99,000. What does this mean? Using the CNBC 12% loss number, two-thirds of average Millionaires lost approximately $29,520 in individual stock holdings and $30,720 in mutual fund holdings for a total of $60,240. Add on an additional $11,880 if that household also owned ETFs. That’s more than the annual salary of many Americans…and could be the cost of a college tuition and more for several households. Keep in mind that most Millionaires with between $1 million - $5 million are retirees living on a fixed income. Ouch!

Now, I know there are several problems with this analysis. It does not include the increase in assets from 12/31 through most of February. It is just an average of a large number of investors. Obviously, the results are dependent on what specific stocks each household owns as investments. It also does not include losses to fixed income assets or international assets. It does not include losses to assets held in defined contribution plans or IRAs. There are a host of challenges to the analysis – but it’s meant to bring a sense of realism to the impact of the Corona Crash.

Whether you believe the Corona Crash is justified based upon the spread of the virus worldwide or if you believe it is due to the surge of Bernie Sanders in the primaries or even if you believe it is a play by the mainstream media to create hysteria – the results of the market downturn last week have impacted the portfolios and the psyches of U.S. investors. On March 16, Spectrem will be releasing an in-depth report entitled The Corona Crash: What Advisors Should Be Saying to Investors Now based upon research being fielded March 4 (the day after Super Tuesday). Spectrem’s previous research and its monthly election report, Investors and the Election: A Guide for Financial Advisors in 2020 had previously reported that investors anticipated that the market would be volatile, but not until later in the year. Previously, most investors wanted to make changes in the next quarter or over the summer. We anticipate that their opinions may have changed and will be able to provide financial advisory firms with that information shortly.

The coronavirus is adding fuel to the fire that is Election Year 2020. Investors will be nervous about the impact of the potential volatility on their portfolios and ultimately on their lives. It’s time for financial advisors to reach out to their clients and provide some calm within the ongoing storm.