On the broadcast network television stations (ABC, NBC, CBS, Fox), reality programming is still the rage, although it is losing audience share to serial television programming offered by subscription services like Amazon Prime, Hulu and Netflix, among others.
There is a form of reality television programming which has a dedicated audience, and it presents more realistic content than the dancing and singing competitions. Financial news programs remain a popular form of television viewing, and there are entire networks dedicated to presenting the economic and financial news of the day.
But are these programs and networks influential with investors, or are they regarded as the financial version of “fake news”?
There are entire networks created to report on the day’s business news and answer questions investors might have about the future of the American economy. CNBC, Bloomberg and Fox Business are the best examples of such programming.
There are also radio programs aimed specifically at investors, and anyone with a subscription to a streaming network like Sirius can find stations which will report on the stock market and other investment topics.
But do investors pay attention to those broadcast media types, or are they still getting their financial information in print form or online from business “magazines”? And, more importantly for an advisor’s consideration, are investors paying attention to what is being said and written?
Spectrem’s new study Portfolio Decision Making answers many of those questions.
The study looks at numerous angles which investors examine when making decisions about their portfolio, including investment goals and advisor relationships.
But when it comes to the influence of the media, investors are a bit hesitant to believe what they read or hear.
Asked to place on a 0-to-100 scale the influence the news of the day has on portfolio decision-making, investors rated it at 48.78, directly at the midpoint. They rated investment performance (70.79) and advisor recommendation (53.01) higher. 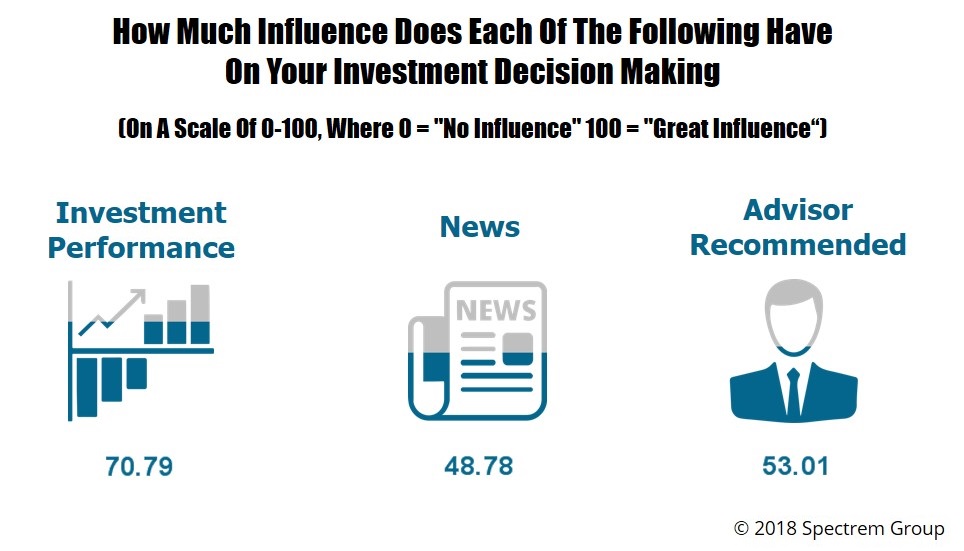 Asked which media outlets actually provide important information that investors use for their investment decisions, 36 percent pointed to the national TV programs on CNBC or Fox Business, and 32 percent pointed to newspapers like the Wall Street Journal, Investors’ Business Daily or Financial Times (although they likely “read” those newspapers online).
But investors are also getting key information from online brokerage research tools like TD Ameritrade and E-trade (24 percent).
Where they are NOT getting information, necessarily, is newsletters like Motley Fool (8 percent) and financial podcasts like Planet Money (4 percent).
Advisors need to know where investors are getting their information, and it would not hurt to have an opinion on which of those financial news outlets are trustworthy. Since investors proclaim their advisors are influential in portfolio decision-making, advisors can be influential in pointing investors to media outlets that have proven over time to cover the financial news of the day, week money and year accurately.
© 2018 Spectrem Group