President's Blog - No Influx of Bucks

On April 23, the NASDAQ and S&P 500 completed a month-long journey to the apex of their specific indices, breaking records for the highest closing number in their respective histories. The NASDAQ, for example, climbed 300 points from April 1 to that April 23 date, and had gains on 10 of the 15 trading days in that time.
For the record, the NASDAQ then recorded record highs again on April 26 and again on April 29.
The stock market was rollicking through the month of April. Corporate earnings were mostly well-received and positive in the month, and those investors who place a large portion of their investable assets into the stock market likely saw significant gains.
So why did investors not respond in an optimistic fashion?
Spectrem’s Affluent and Millionaire Investor Confidence Indices for April indicated a distinct preference for pulling back out of the stock market, and the percentages in terms of investment interest were demonstrable.
Advisors should be asking what is motivating this drawback among wealthy investors. What outside influences are causing investors to lack confidence in the economy, and why isn’t the rising stock market indices causing an influx of bucks in the markets?
Economists often warn financial commentators to remember that the stock market is not the economy, and that many investors do not invest in equities, preferring a safer investment strategy. But the Spectrem indices include many investors who do invest in individual stocks and stock mutual funds, and those same investors chose not to do so in April.
How significant was the pullback?
The Spectrem Millionaire Investor Confidence Index (SMICI), which measures the confidence of investors with $1 million in investable assets, registered a 2-point gain in April from 6 to 8. But that index registered a 20 in August of 2018, and then settled into single digits, and for the past four months, it has gone back and forth between a rise and fall. There is not consistent reaction to the stock market, which has been on a steady climb in 2019 after overcoming the huge drop suffered in December.
But it is not just the overall number that seemed significant. Millionaires investing in stock mutual funds dropped from 42.1 percent in March to 27.9 percent in April, and similar decreases occurred in the safer options like individual bonds (11.1 percent to 3.9 percent), and bond mutual funds (14.3 percent to 8.5 percent).
The Spectrem Affluent Investor Confidence Index, which measures the confidence of investors with $500,000 in investable assets, also saw decreases in investment interest in all categories other than the bond mutual funds, and the overall index number dropped from 3 to 2. The SAICI has not been in double digits in over a year, and has not been above 4 since October. 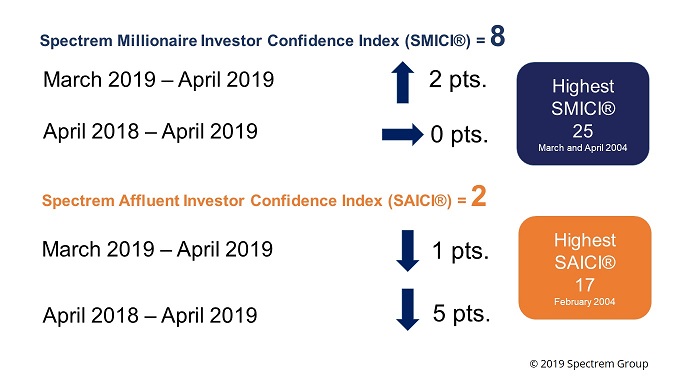 These numbers reflect investor confidence in the belief that their investments will produce added assets, and the confidence among all investors is very low. What is driving that lack of certainty among investors, many of whom know a great deal about investing, finance and the economy?
Advisors can guess, of course, that investors are worried about the impact of tariffs on incoming foreign goods which increase prices on products made outside of the United States, of which there are many. They may be judging the state of the economy on gas prices, which are on the rise as President Donald Trump aims to reduce Iranian oil sales to near zero, thus causing a rise of gas prices in the U.S. as vacation season approaches.
But those are only guesses. The only way to accurately gauge the confidence of investors in the economy and in their investing choices is to ask them what they are experiencing in their household or what they are reading or hearing which is influencing their investment attitudes and behaviors.
Then, advisors must help their clients examine their investment choices based on those influences to create a more positive attitude toward investments going forward.