President's Blog: Inheritance Advice? No, Thanks

Estate planning and wealth transfer are huge considerations for wealthy investors. They want to make the correct decisions in order to make the transfer of wealth as smooth as possible for their beneficiaries.

And many of them know the benefits of working with an advisor, both in receiving an inheritance and creating their own estate plan and wealth transfer details.

But many do not, because they chose not to get professional advice about handling their inheritance.

Our new study Legacy 2.0: Baby Boomers and Inheritances investigates the decision-making process that Baby Boomers made in receiving an inheritance and how those same investors are planning their own eventual wealth transfer to provide an inheritance for their beneficiaries. Included in the study are many questions related to advisor usage in both ends of the process, as a receiver and as a grantor.

The result of the study is that the process of receiving an inheritance and in providing an inheritance is often conducted without the benefit of advisor advice, which seems both unfortunate and intellectually unwise.

In some cases, inheritors receive millions of dollars. The Spectrem study was designed for Baby Boomers who inherited at least $500,000, but half of the investors surveyed received more than $1 million. An injection of that level of wealth demands investors make decisions that can have future impact upon a portfolio. To make those decisions without the advice of a financial professional seems almost counter-intuitive.

As an advisor, are you fully aware of the money that your clients have coming to them in the form of inheritance, or have you worked with an inheritor who chose to process the inheritance alone? Have you discussed with them what their intentions are regarding the use and allocation of those funds when they arrive? Have you ever received backlash for asking such questions?

This research just screams “opportunity missed”, most importantly for the inheritor. Depending on the size of the inheritance, inheritors have an opportunity to make decisions that will have positive impact for years to come, and could benefit beneficiaries accordingly and without too much difficulty. 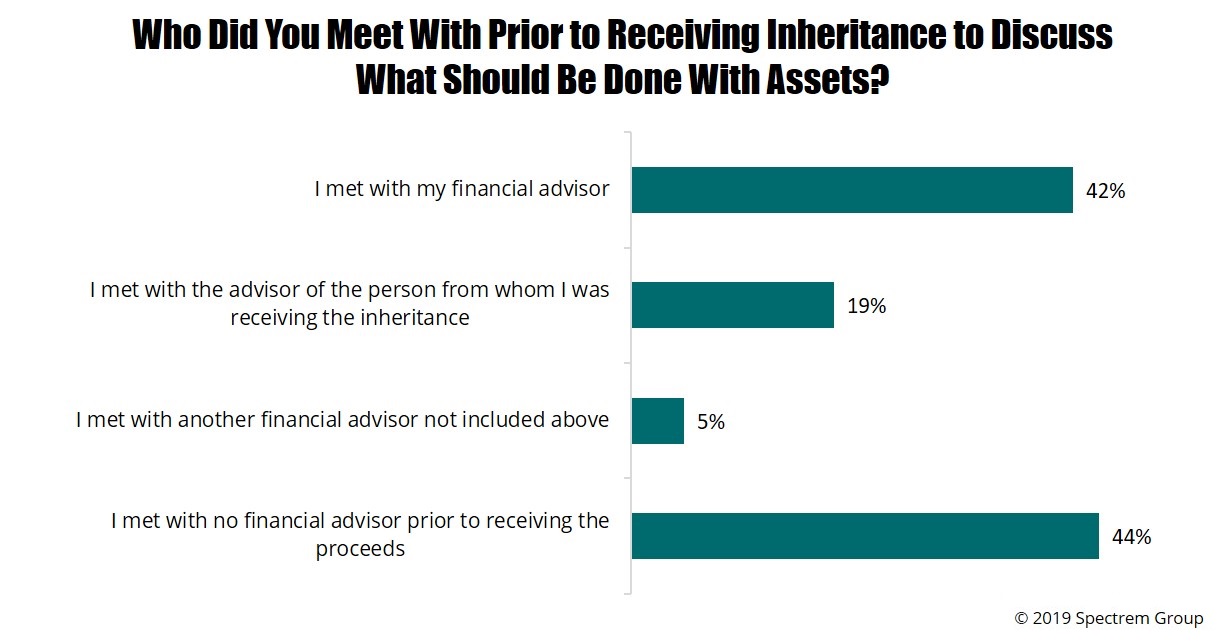 The inheritors surveyed for the study reported a low level of impact upon their lifestyle as a result of receiving the inheritance, perhaps because they were already well positioned financially. That may also be true of their advisor relationship.

There are clients of all ages who are either expecting an inheritance someday or who are still in the process of receiving distributions from an inheritance. They need to know that an advisor can help them make wise choices with that influx of bucks. Offering to help is not an inappropriate action, just as it is not inappropriate for an investor to decline the offer.

Wrong-minded perhaps,  but not inappropriate.