A year after the historic tax cuts made by the Trump administration, the results are somewhat unclear.  It is true that the economy is booming and the stock market, while volatile, remains much higher than in the previous Presidential administration.  But Spectrem’s research with investors indicates a rather lukewarm endorsement of the tax cuts – probably because many of the investors have not experienced a direct benefit from the tax cuts. 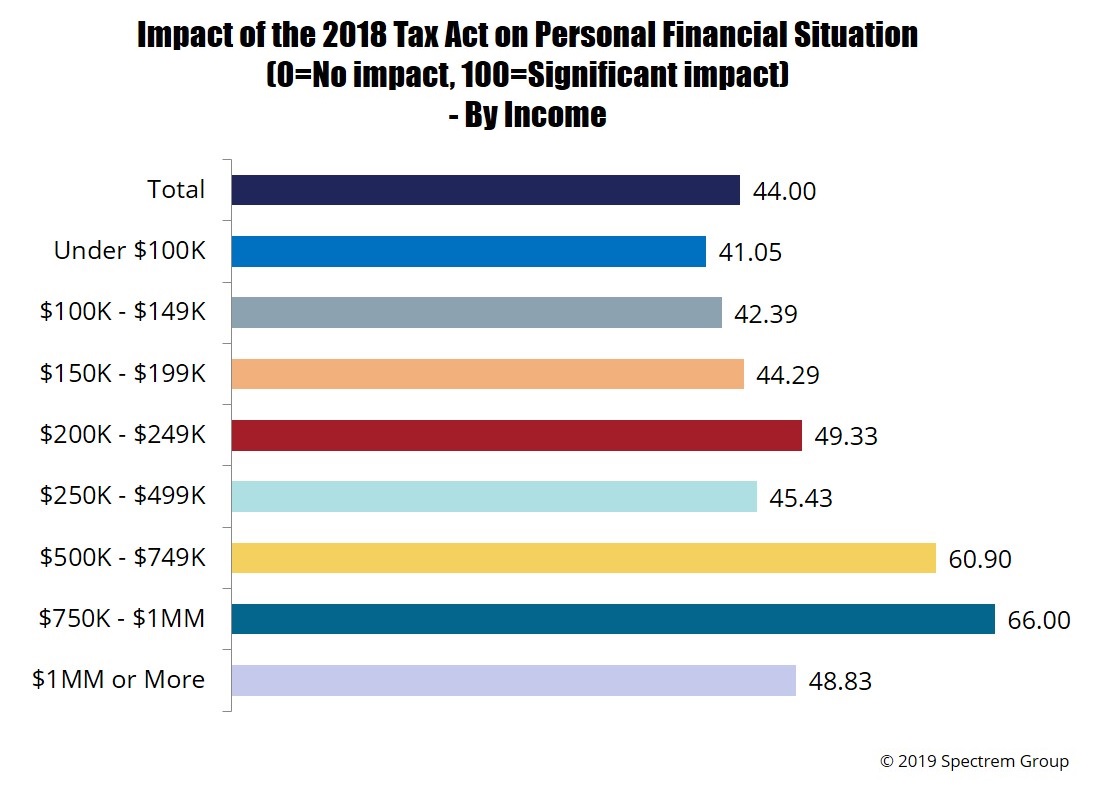 It’s important to remember that Spectrem’s research is primarily with wealthy households.  Every month we interview more than a thousand households with net worth ranging from $100,000 to $25 million (not including their primary residence.)  In the first quarter we asked investors to rate on a 0-100 scale the impact of the 2018 Tax Act on their own personal financial situation.  The overall score was a 44.  While it wasn’t over a 50, it still had some type of influence on a substantial number of households.  When reviewed based upon political ideology, Republicans scored the impact at 49.11, Democrats scored a 41.66 and Independents scored the impact at 40.94.  Interestingly, when the question was analyzed based upon income, those with incomes between $500,000 and $749,000 and those between $750,000 and $1,000,000 felt the greatest impact on their personal financial situation scoring the impact at 60.90 and 66.00, respectively.  Many of these individuals suffered a significant increase in their taxes because they lived in SALT states (California, Connecticut, Illinois, New Jersey and New York).  These are states that with high state income, property and other taxes.  The new federal law limits state tax deductions thus many of these individuals actually ended up paying more in taxes than less.
One of the unanticipated impacts of the federal tax cuts was how the state tax burdens were highlighted. (Of course, Senators from these high tax states were aware of the impact and therefore fought against the tax bill.)  As mentioned above, the inability of investors to deduct the sky-high property and other taxes within the SALT states increased the tax burden for many investors.  As investors started to pay attention to their property taxes, they also began to focus on their overall state income tax and other state taxes.  Not surprisingly, there is now a wave of investors moving from high-tax states such as New York, New Jersey and Illinois to low or no-tax states.  On January 11, CNBC reported that New Jersey was the number one state for losing residents followed closely by Illinois.  On January 2, 2019, Fox Business reported that survey data showed the fastest growing states include those with little to no income tax.
I will raise my hand as one of those investors.  Suddenly my husband and I have realized that if we move from our high-tax state (Illinois) to Florida…which has a better climate and no state income tax, we immediately save enough to pay my daughter’s college tuition.  That’s a no-brainer, right?  Based on the promises of the new governor, the income tax rate in Illinois is going to increase while taxes are doubling on gas, license plates and any thing else they can find to tax…such as data usage.  As we contemplate a potential move, it’s important to remain aware of the political environment surrounding us.
Whether President Trump will ultimately benefit politically from the tax cuts and gain re-election in 2020 is yet to be seen.  The verdict is still out on how many households benefited from the new rates, however, I would like to believe it is many.  To the detriment of those states with high property taxes and high income taxes (generally, blue states), the tax issue is going to continue to become increasingly important to voters in those states.
© 2019 Spectrem Group