During the week of June 24, leaders from 20 of the most prosperous nations will meet in Osaka, Japan for the G-20 summit, one of the most prestigious meetings of global powers.
Presidents, prime ministers and kings from Argentina, Australia, Brazil, Canada, China, France, Germany, India, Indonesia, Japan, South Korea, Mexico, Russia, Saudi Arabia, South Africa, Turkey, the United Kingdom, the United States and the European Union meet in one place for a period of days to discuss matters of global concern.
The state of global affairs today is such that anything can happen at this summit. President Donald Trump Monday warned Chinese President Xi Jinping that if he does not represent China at the summit and agree to a one-on-one negotiating meeting with the U.S., further tariffs will be put in place. That’s a threat three weeks in the making.
Almost every industry is impacted by trade relations between the United States and China, and a huge majority of manufactured goods are available to U.S. consumers as a result of that relationship. Citizens who actively invest in the U.S. stock market must watch the relationship with a sharp and calloused eye to see just how daily remarks from both sides will impact investments in the U.S.
And yet, there are many investors who state they have not had any discussions with their financial advisors about the ramifications of the U.S.-China trade negotiations.
As part of Spectrem’s monthly research with wealthy investors, we ask questions that relate to the hot topics of the day. In May, the questions revolved around the U.S.-China trade conflict.
Of the 700-plus investors surveyed, 53 percent said they were concerned about the conflict, and 29 percent said they were very concerned. That’s 82 percent of all investors with some level of consternation related to the U.S.-China trade battle. 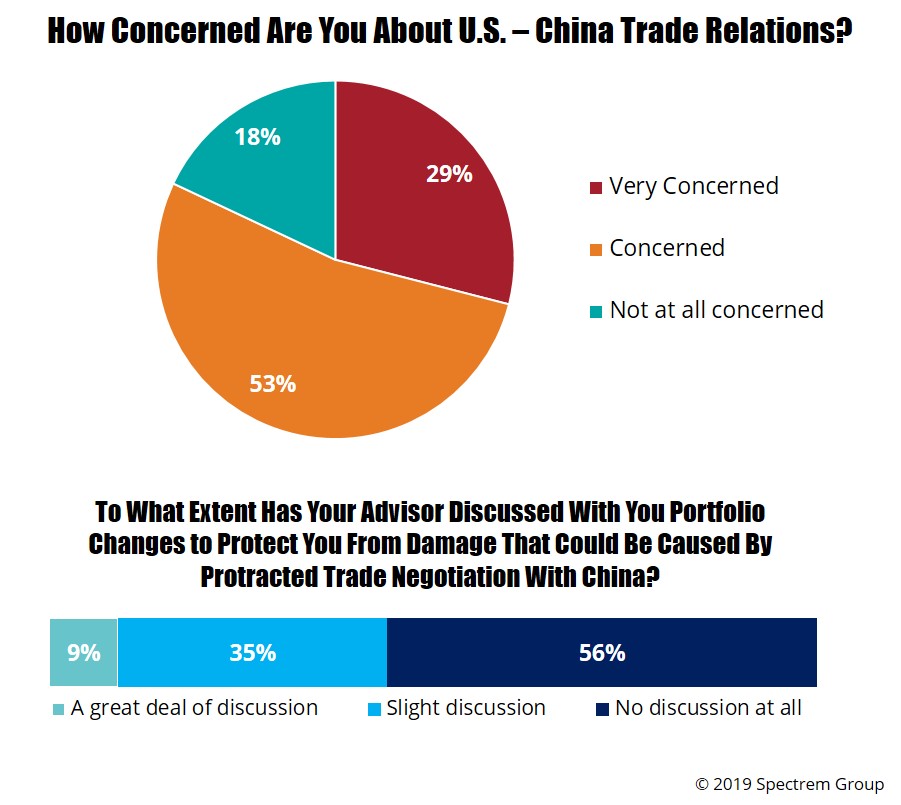 However, of the investors who have a primary financial advisor, only 9 percent said they had had “a great deal of discussion" with their advisor about the implications of the trade negotiations, and only 35 percent said they had even “slight discussion" of the topic with their investment professional. That’s less than half of investors with an advisor who have discussed portfolio implications regarding trade with China.
There certainly may be reasons more investors are not having conversations about this topic with their advisor. Perhaps some investors are not invested in a way that the results of the trade negotiations will have an impact.
But, with the G-20 summit more than two weeks away and the possibility for more back-and-forth between the two country’s leaders to occur between now and then, this is a good time for advisors to have a serious conversation with their clients to discuss the concrete moves that can be made to protect portfolios from possible tariff damage.
Often, conversations on specific current events related to investment decisions can be difficult to focus on. It may be hard for investors to understand how, say, a new farm bill or the upcoming Federal Reserve Board meeting directly impacts their investment decisions.
But this is a situation where the topic is hotter than any other economic topic has been in years. Even the most disconnected investor knows that Trump and the Chinese President have matters to discuss. Even the most disconnected investor would like to know how those discussions are going to matter to them specifically down the line.
In preparation for the summit, the finance ministers and central bank heads from all 20 nations gathered last weekend in Japan to discuss the upcoming gathering, and they released a joint statement saying that trade and geopolitical tensions were “intensifying” and that the economic relations of all the nations was the No. 1 concern for the summit.
If there was ever a time to sit down with a client to discuss a specific topic, that time would seem to be now.
© 2019 Spectrem Group