Blog: “Fiduciary” – Does It Really Matter?

As you already know, earlier this month, the SEC quietly made some significant changes to its required customer disclosure relationship language.  The word “fiduciary” was removed from mandated language that RIAs were required to use to describe their standard of conduct and it was changed to “best interest”.
Is this a big deal?  I have since read articles on both sides of the argument … and I thought it might be useful to provide some perspective from the Voice of the Investor.  As a further disclaimer, however, I will let you know that earlier in my career I was “trust counsel” and “fiduciary” was a really big deal.
In our research, we ask investors about once a year if they understand what a “fiduciary” is and we give them some descriptions.  Generally they choose the correct answer.  We also ask them if their own advisor is a “fiduciary”… and most investors indicate that their advisor is a fiduciary.  In a separate section of the questionnaire we ask investors what type of advisor they have and the largest percentage of investors indicate that their advisor is a Full Service Broker.  RIAs and Financial Planners fall behind Full Service Brokers and Trust Officers/Trust Companies are much lower.
The reality is that most investors don’t really know what type of advisor they really use.  It’s confusing to investors.  If you aren’t in the industry, who really knows the difference between a RIA and a Full Service Broker?  It’s not a conversation you have at cocktail parties.  In fact, I’m not always confident about the differences.  But I do know that one of the differences is the legal standard of care.  “Best interests” and “fiduciary” are different standards legally.  Brokers are generally held to a “best interests” standard that is lower than the almighty “fiduciary” standard.
Just recently you may have begun seeing TV commercials in which advisory firms use the word fiduciary.  Since the DOL pushed out its proposed standards for retirement accounts (which were never adopted), many RIAs realized that the “fiduciary” word might actually be an advantage.  For years, Spectrem has tried to advise trust providers that they should use the “fiduciary” word as an advantage rather than as a detriment.  (In the 1990s, “fiduciary” sometimes became a word linked to being too restrictive and thus leading to bad investment results and it was rarely used in marketing efforts.)
Recently, investors were asked if they would pay extra for their advisor to be a “fiduciary”.  As you can see below, younger investors were the most likely to be willing to pay for their advisor to be a fiduciary. 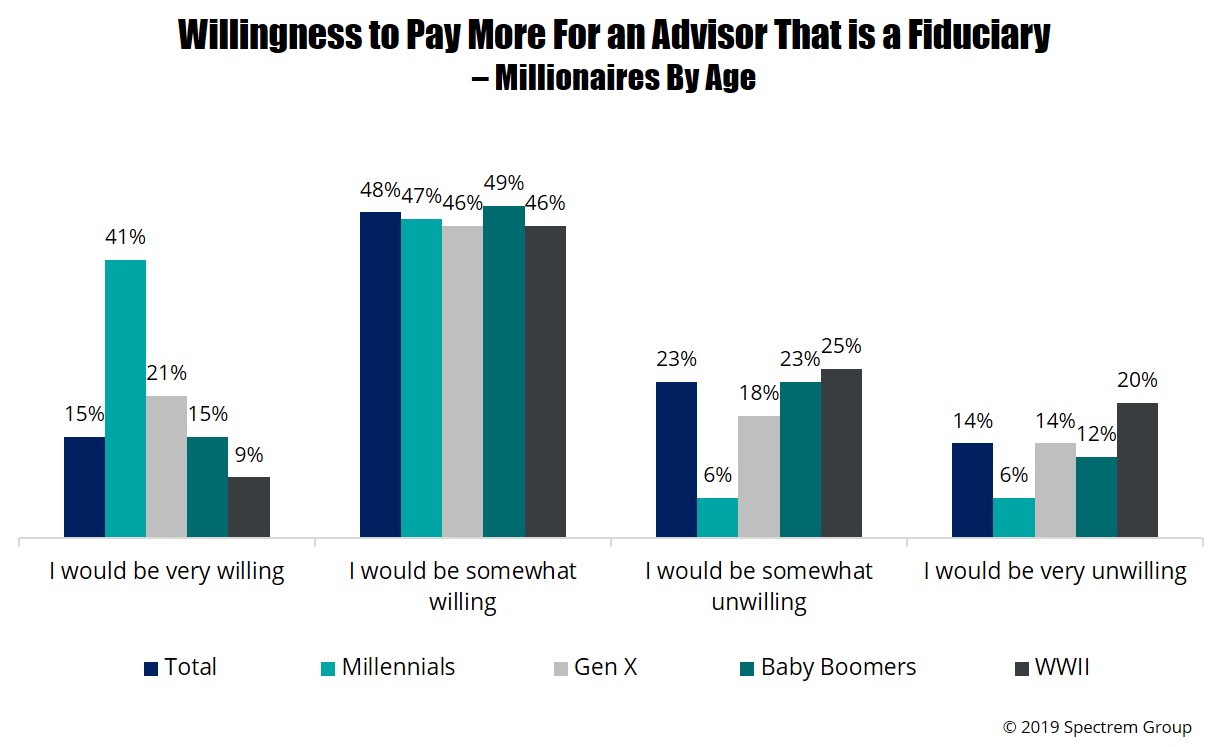 It may be that older investors simply expect an advisor to be a fiduciary and don’t want to pay more while younger investors have lower expectations.
One of our favorite Spectrem stories is a focus group we were conducting on behalf of a client in which we were discussing the term “fiduciary”.  The participants were investors with $1 million plus of net worth.  A gentleman in the group had entered wearing denim shorts, a Harley Davidson shirt and black motorcycle boots.  He had longish hair and fit the stereotype of a “biker”.  During our discussion we asked if they knew the difference between having an advisor who was a “fiduciary” and one who was not.  While most did not know the difference, our “Harley” participant chimed in and said “There is a h*ll of a lot of difference.  For one thing, you can sue a fiduciary a lot easier when they screw up.”  He then launched into a long discussion with his peers about the benefit of having an advisor who is a fiduciary.
So, clearly investors aren’t really clear about what the legal standards of a fiduciary may be compared to an advisor who merely has a best interests standard. But what does it matter?  It matters because investors really expect the highest standard from their advisor, and they don’t care what it may be called legally.