President's Blog - Elections and Tariffs and Interest Rates – Oh My!

Summer has officially ended. It is autumn, and the weather is going to change. So, too, is the atmosphere surrounding the financial markets and investment possibilities, thanks to a couple of key events on the horizon.
It’s time for advisors to get down to business and discuss the ramifications of the next couple of months with investors whose portfolios can be impacted by current events.
In five short weeks, America will host the mid-term elections nationwide. Every single member of the House of Representatives and a notable percentage of U.S. Senators will be elected. The mid-terms are historically a time when voters go the other way from their election performance two years prior, and political pundits expect Democrats to gain seats in both houses of Congress.  It is obviously not known if they will gain enough seats to reduce the influence of the Republican Party and President Donald Trump on the economy of the nation, but it is certainly possible, and the possibility needs to be addressed with investors.
The trade war went from hot to blistering this week when President Trump instituted a new round of tariffs on China, placing import fees on $200 billion worth of Chinese goods. In response, the Chinese government placed similar fees on $60 billion of U.S. products aimed at the lucrative Chinese marketplace.
The impact on the prices of consumer goods in the United States may not be felt immediately, but the investment climate for products impacted by those tariffs is altered.
On Sept. 26, the U.S. Federal Reserve holds its next Open Market Committee meeting to determine the direction of the economy and to determine the proper benchmark federal interest rate. The Federal Reserve often withholds a change in the interest rate in the meeting prior to the next federal election, but the economy has been so robust in recent months that experts speculate a quarter-point rise in the interest rate is not beyond the realm of possibility.
In Spectrem’s monthly survey of investors this summer, 65 percent of investors said they were going to be paying more attention to talk of tariffs and their impact on investment options. That was two months ago, well before this latest round of tariffs placed upon goods from China. The interest among investors on this topic has to be higher today than it was in July. 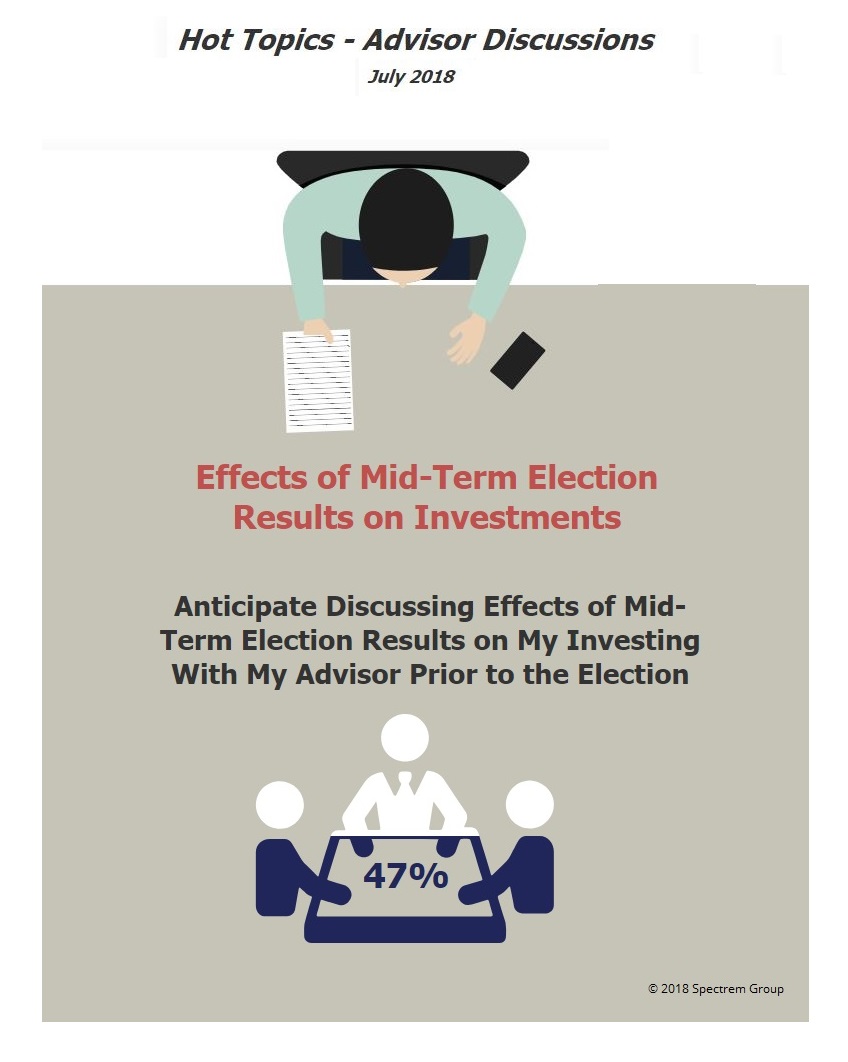 Also this summer, 47 percent of investors told us they were going to talk to their advisors about the impact of midterm elections upon investment options. That may seem a little low; it is likely any result, whether it be pro-Republican or pro-Democrat, will have an impact on investment decisions. Now is the time to consider those possible impacts and prepare to act accordingly.
A Democratic turn in the House or Senate would derail any economic projects or plans for the Trump administration. A positive Republican result, which would likely be just maintaining a majority in the two chambers of the Congress, would likely result in a push for a second round of tax cuts, which obviously have an impact on corporate returns and investment opportunities.
To be sure, there are investors who do not wish to discuss current events with their advisor, and invest in a safe and conservative manner so that current events do not have a devastating (or constructive) impact on their portfolio. Those investors likely do not need a phone call or text message from their advisor to set up a meeting immediately.
And of course, there are investors who enjoy the day-to-day maneuvering that can take place in the markets. Those investors are already perfectly aware of what is going on and are likely making judgment calls on a daily basis to position themselves for whatever event they deem likely.
But there are investors who are not frequently in touch with their advisor, but who are invested in products that do fluctuate due to current events. It is those investors who advisors need to be in contact with. Those investors will appreciate not only the opportunity to discuss how current events may affect their investments, but will also appreciate the forward-thinking of their advisor, who is in tune with the state of governmental, political and global affairs and wants to act accordingly.
Investors with whom contact is sporadic will probably recognize the importance of a call coming five weeks from the mid-term elections, the day after new tariffs were implemented, and the day before the Fed raises interest rates. Or, they may not know those events are likely to impact their investments and will be pleased to find out that you are on the case.
© 2018 Spectrem Group