Blog - Does Money Increase Your Happiness?

It’s a simple question but fraught with potentially inflammatory results.  If one claims that money makes them happy that person could be deemed shallow or selfish.  Most people I have met will say “family and friends make me happy” but money certainly doesn’t hurt.  And then you will have others who proclaim that money is the source of all evil. 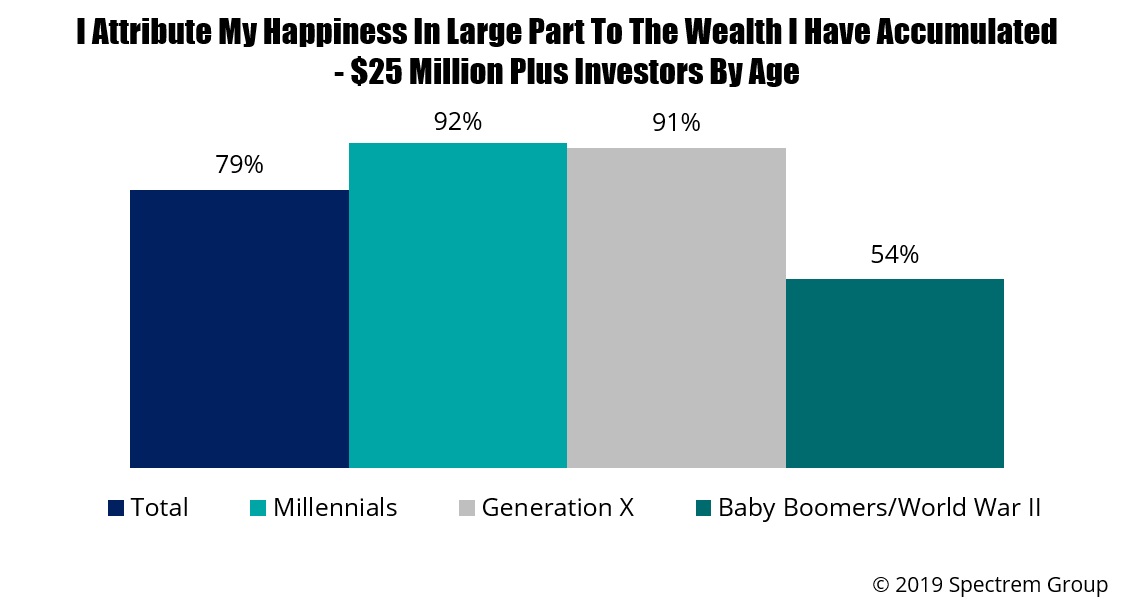 Spectrem recently asked investors with more than $25 million of net worth if they felt they could attribute their happiness in large part to the wealth they had accumulated.
Seventy-nine percent agreed that their wealth contributed to their overall happiness.  This feeling was even greater for younger wealthy households with 92 percent of Millennials and 91 percent of GenXers attributing some of their happiness to their wealth compared to 54 percent of Baby Boomers and older.
And why not?  Shouldn’t these young successful investors be proud of what they have achieved at such an early age?  Even though a large percentage attribute a portion of the assets to inheritance, 91 percent also attribute their success to hard work and 89 percent credit their Education.  A feeling of success and self-confidence definitely leads to happiness.
And let’s face it.  Having a substantial amount of assets reduces the stress of many of the personal and financial challenges faced by individuals with less wealth.  For example, 46 percent of individuals with $100,000 of net worth are worried about being able to retire when they want compared to 8 percent of those with more than $15 million of net worth.  And while wealthy people worry equally as much about family health catastrophes and the health of their spouse as those with a lower net worth…that concern is primarily emotional.  In contrast for those with less wealth it is both emotional and financial.
Thus, in most cases, it is easy to say that having sufficient assets to protect your future and the future of your family can lead to greater happiness.  That doesn’t mean the rest of us are doomed to unhappiness.  It just means that most households need to work carefully with advisors or whomever to properly allocate and save assets to allow for the greatest security possible.
Happiness is an ephemeral thing…defining it and achieving it can be a lifelong goal and challenge. But it is OK for young wealthy households to acknowledge that their wealth does attribute to their happiness.
© 2019 Spectrem Group