Blog - Does Anyone Really Invest in Bitcoin?

In recent months, bitcoin has been quite a topic of conversation.  Everyone seems to know someone who has invested in bitcoin and either made or lost a lot of money (or whatever it is you lose after it becomes bitcoin).  Because of the recent interest level of the media in bitcoin, Spectrem decided to ask investors how they feel about bitcoin and if they have or intend to invest in bitcoin in the future.
For those of you who may not be familiar with bitcoin, according to WhatIs (whatis.techtarget.com/definition/Bitcoin), bitcoin is a digital currency (also called crypto-currency) that is not backed by any country's central bank or government. Bitcoins can be traded for goods or services with vendors who accept bitcoins as payment.  There is a limited amount of bitcoin that impacts the value.  According to CNBC, bitcoin was trading above $19,000 in December of 2017 but is trading around $8,700 in March of 2018.  (Part of this may be due because increased regulatory scrutiny is being threatened.)
As you may know, Spectrem fields research with thousands of households with more than $100,000 of net worth (not including primary residence) up to $25 million of net worth each month.  We touch more than 6,500 wealthy households each year.  In recent months we asked investors their familiarity with bitcoin and found the following:
Overall, knowledge levels are relatively low when compared to other types of investment products.  That, of course, impacts one’s willingness to invest in bitcoin.  Spectrem asked about actual ownership of bitcoin and found: 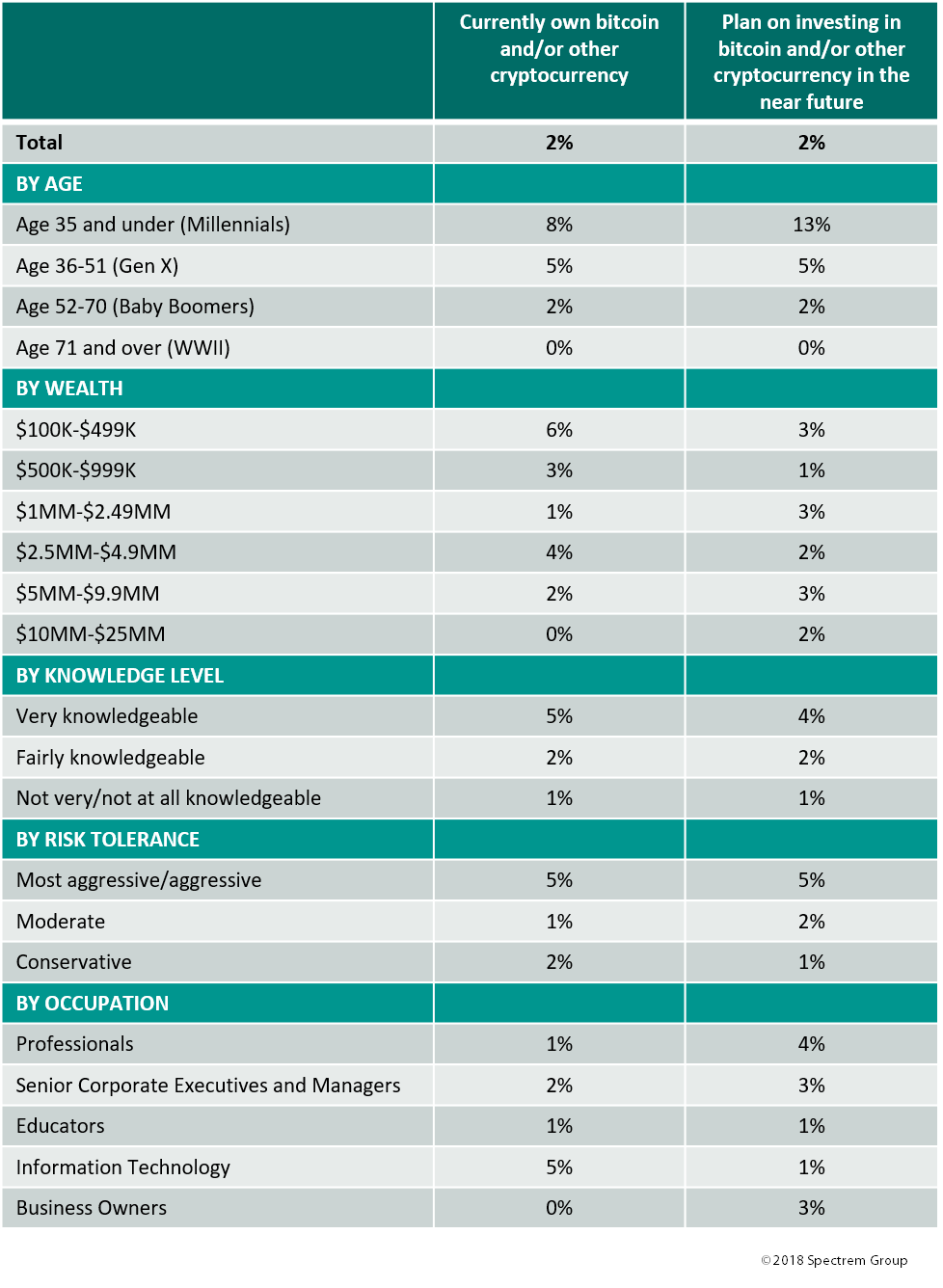 As you can see from the chart above, only 2% of investors currently own bitcoin and only 2% plan on investing in it in the future.  However, younger households are much more interested in investing (13%) or likely to currently own bitcoin (8%) than older households. Interestingly, less wealthy households are more likely than others to own bitcoin with 6% of those with $100,000 to $499,000 owning bitcoin.  Of course both investors who claim they are Very Knowledgeable (5%) and Most Aggressive (5%) are more likely to be invested in bitcoin.  It’s interesting to note that Business Owners, who claim to be Very Knowledgeable about bitcoin, are invested in bitcoin at 0%.  In contrast, 1% of Professionals own bitcoin.
So the future of bitcoin is unclear.  Seven percent of investors are waiting to see what will happen with investors before investing in bitcoin while 88% have no plans to ever invest in bitcoin or other cryptocurrencies.  Clearly bitcoin has an uphill battle before it will be able to become the global currency.
© 2018 Spectrem Group