Until this week I have felt badly about my inability to budget. It’s not that my husband and I haven’t tried.  One attempt failed after he continuously badgered me for the receipts from my lunch so he could enter them into the software program he had meticulously set up.  Most days I don’t remember what I had for lunch five hours later and I certainly don’t know what I did with the receipts.  And the program was never going to find out about the extra pair of shoes I purchased and didn’t really want to discuss.   While this was before you could track everything on your phone, I’m still not sure that I’m up for following a meticulous budget process.
But despite my reluctance to follow a budget, I have always believed that budgeting is important and that it would be to our advantage to have a budget.  I mean every month I wonder how we could have spent so much money.  And I have always believed we were one of the few budgetless families.
Research we completed at Spectrem Group this month, however, indicates that I am not alone in being budgetless.  In fact, only 42% of investors have a budget.  It’s even more interesting to note that those households with more than $5 million of net worth are less likely to have a budget than those with $500,000 to $1,000, 000 of net worth (35% vs. 55%).  While I can use this as a justification for my behaviors (“Look, dear...those with a lot more money than us don’t budget either!"), I also know a little more about the data than is clear from the outset.  Wealthier households tend to be older and already retired.  Maybe you don’t really need to pay as much attention to budgeting if you are already wealthy and celebrating your golden years?  I could also argue that those less wealthy households who are budgeting may end up someday becoming wealthier than those who don’t budget…but I don’t have any proof for that. 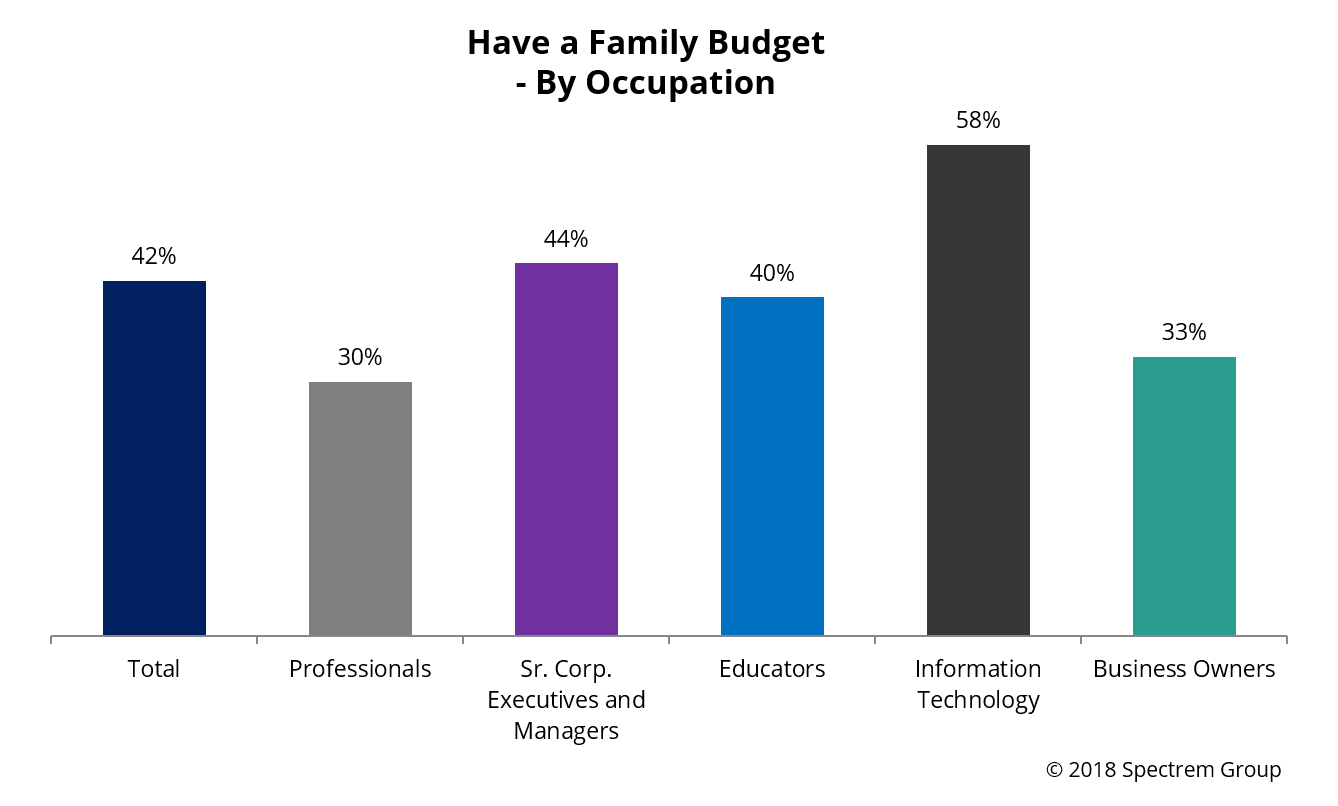 On a side note, there are significant differences in whether or not one has a budget based on occupation.  For example, those households in the Information Technology field are the most likely to have a budget at 58%.  The occupations that are least likely to have budgets are Professionals (30%) and Business Owners (33%).  Since I am both a lawyer and a Business Owner I feel justified in my own lack of budgeting by those numbers.  Senior Corporate Executives are more likely to have a budget at 44% and 40% of Educators have a budget.
While having a budget is a good idea, what’s even more important is being able to follow the budget.  When asked to rate on a scale of 0 to 100 how well they followed the family budget, those who have a budget rated themselves at 68.45.  It’s interesting to note that those Professionals and Business Owners who do have budgets are the most likely to stick to their budgets at 76.07 and 75.56 respectively.
It’s probably important to note that while the wealthiest households are less likely to have a budget, they are the most likely to stick to their budget if they do have one.  For example, while only 31% of households with $10-25 million have a family budget, those who do rate compliance with their budget at 74.54.  In contrast, 55% of those with $500,000 to $1,000,000 of net worth have a budget but rate their ability to follow the budget at 64.42.
Ultimately, it’s hard to believe that both having a budget and sticking to the budget are good ideas that we all should follow.  There is, however, a little bit of relief in knowing that I am not alone…
© 2018 Spectrem Group