Blog – The Difficult Definition of the American Dream

When I studied history in high school, we were taught that the “American Dream” was attainable by all and that it meant that each generation would be able to do better than the last.  Now, as much as I hate to admit it, the concept of the American Dream was still relatively fresh and new at that time.  My grandparents were products of the Depression, and the concept that their grandchildren might be able to go to college was overwhelming to them.  Their parents or grandparents had come from Europe.  They, of course, felt they were doing better than their own parents.  My grandfather worked in the International Harvester factory (full-time job with pension) and my grandmother stayed at home and raised the children.  They had a washing machine with a ringer that you squished the clothes through after the cycle.  The clothes were then hung to dry on the clothesline outside (winter or summer).  The icebox had real ice in the bottom of it, delivered several times per week.  Wasn’t life grand?

Not only did their children have a washer with full cycles but an electric dryer….and a dishwasher….a refrigerator….and more.  All things are in the eye of the beholder and they felt their children were definitely doing better than they were.

When Spectrem Group recently asked wealthy women how they defined the “American Dream”, the answers varied, reflecting the values of a different generation.  In fact, the age of the respondents showed interesting differences between Millennials, Gen Xers, Baby Boomers and the WWII generation. 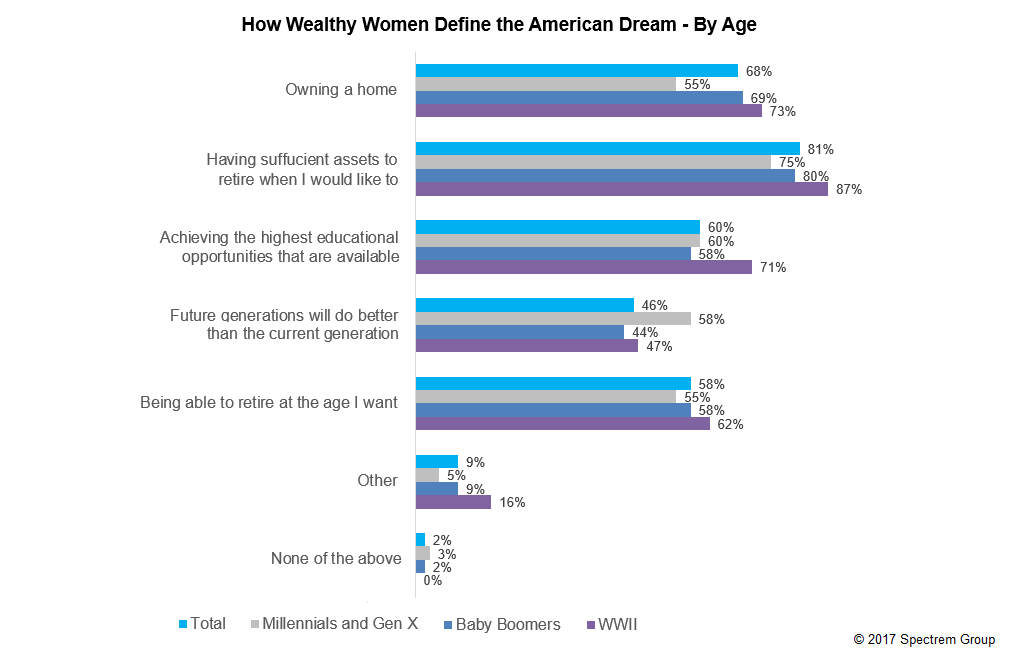 Overall, the largest percentage of women (81%) indicated that the American Dream meant having enough assets to retire when they would like.  In second place, 68% said that “owning a home” was a definition of the American Dream.  Sixty percent of wealthy women believe that “achieving the highest education opportunities available” is part of the American Dream.  Similar to having assets to retire, 58% felt being able to retire at the age they wanted was part of the American Dream.  And my old-fashioned definition that the American Dream means “future generations will do better than the current generation”?  Only 46% of women chose that definition.
It’s interesting to analyze the answers based upon the age group that the women fall within.  For example, only 55% of Millennials define owning a home as part of the American Dream, compared to 73% of the WWII generation.  Could this be because younger generations perceive that owning a home isn’t something that is difficult to achieve?  Or even that, based upon what happened in the recent recession, that owning a home is not always the best option?
It’s also interesting to note that “achieving the highest educational opportunities available” was defined as part of the American Dream by 71% of the WWII generation but was rated at only approximately 60% by younger generations.  Is this because many women of the WWII generation weren’t able to achieve a college education but younger generations take it for granted?
It’s also interesting to note that 58% of Millennials believe that the “old-fashioned” definition of the American Dream that says future generations will do better than the current generation, compared to only 44% of Baby Boomers.  Does that mean that my children don’t appreciate everything we did for them??  How can their children be better off than they are?  See how difficult it is to define the American Dream?
But what is the most important finding in this research?  How important it is to women to have enough money to live successfully through retirement.   My grandparents didn’t worry about that.  Why?  Because they didn’t expect to live a long time in retirement (although they actually did) and because…..my grandfather had that nice pension plan from International Harvester.  Something most of us who are younger don’t have.
American women today still want their children to do better than they did….but many of these women feel their children are doing “ok”.  What they want now is to feel that they will be able to successfully live through their golden years.  And that’s not a bad definition of the American Dream.